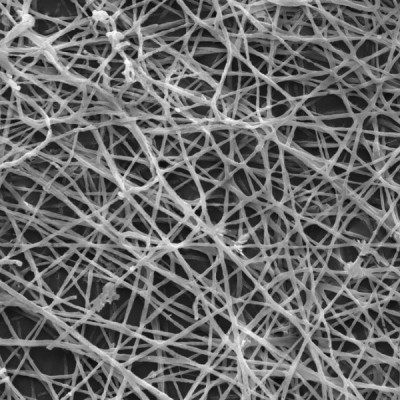 Using a device small enough to fit on the head of a pin, researchers at the University of Illinois at Urbana-Champaign gained new knowledge about the properties of polymer fibers at the nanoscale—knowledge that can inform the design and manufacturing of products made up of random networks of filaments, such as robust filters designed to block foreign particles from entering our lungs

Using a device small enough to fit on the head of a pin, researchers at the University of Illinois at Urbana-Champaign gained new knowledge about the properties of polymer fibers at the nanoscale—knowledge that can inform the design and manufacturing of products made up of random networks of filaments, such as robust filters designed to block foreign particles from entering our lungs. 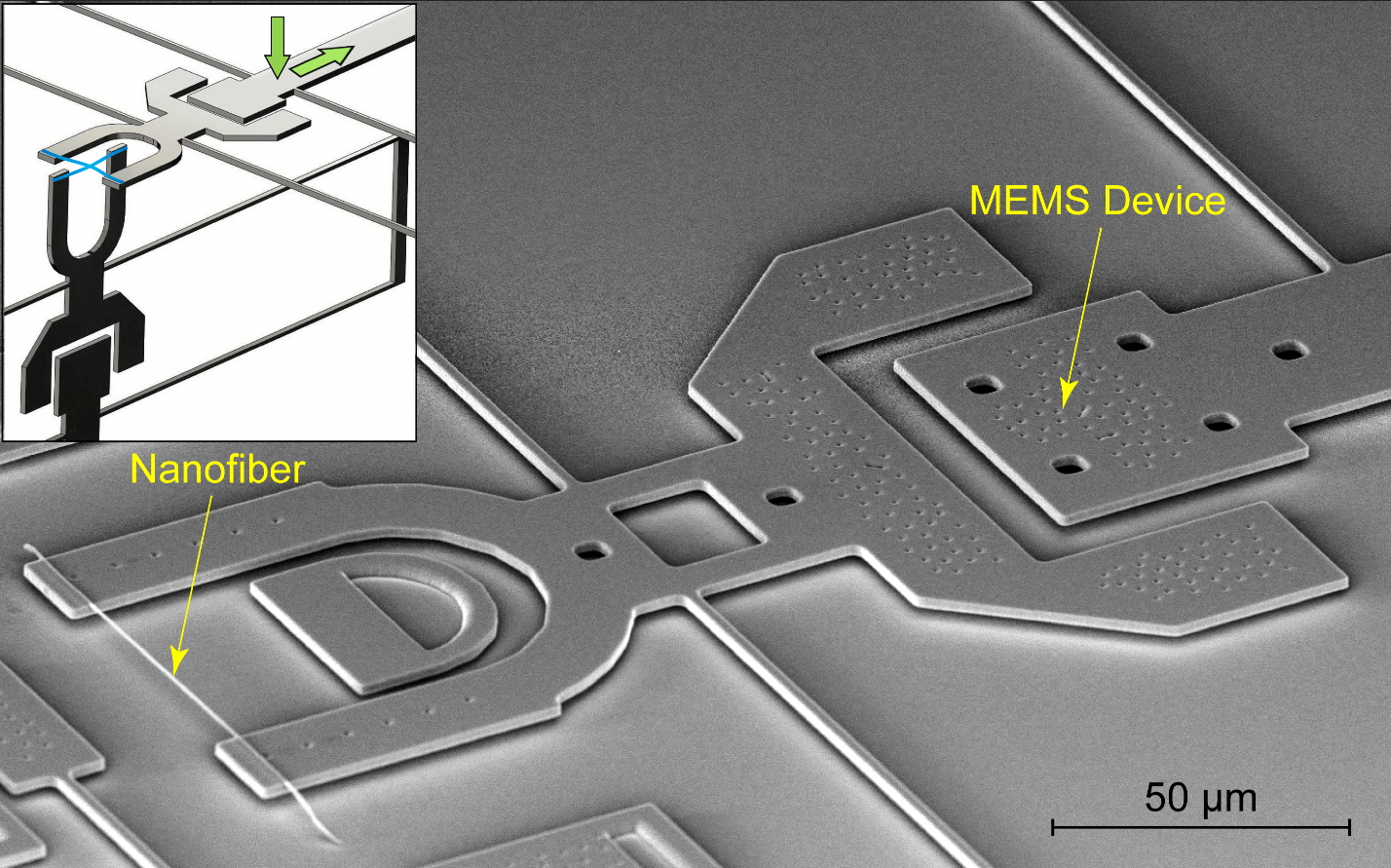 A polymer nanofiber, smaller than one hundredth the size of a human hair, mounted on a MEMS mechanical testing device. The inset shows two devices positioned perpendicularly so that adhesion and friction forces could be simultaneously measured at the intersecting point of contact.

“Networks of interconnected filaments are everywhere in biological and bioengineered systems, such as connective tissues, spider webs, and scaffolds for tissue growth, as well as consumer products, such as air filters” said Debashish Das, a postdoctoral scholar in the Department of Aerospace Engineering at the U of I. “This research provides direct experimental insights into the way adhesion and friction are coupled at the nanometer length scale. Nanoscale fibers of like materials strongly adhere to each other which makes separation difficult. And, even if they are forcefully separated, they spontaneously stick back together. Obtaining experimental insights into these phenomena can have direct implications to the design of strong, resilient, and tough networks of soft nanofibers.”

Das explained as we examine fibers and other surfaces at micro and nanoscales, the landscape changes. “As we go smaller and smaller from the macro length scale, which are visible to unaided eye, to the micro and nanometer length scales, the surface area of particles and fibers decreases slower compared to the volume and everything becomes stickier.”

In a network of crisscrossing nanofibers with millions of junctions, Das conducted experiments to find out what happens at one of the overlapping junctions and to measure the force required to pull or slide two fibers apart. The diameter of just one of his nanofibers is more than one hundred times smaller than a human hair.

“To understand what happens in the network at the macro scale, which is potentially comprised of billions of nanofibers, first we need to understand the mechanical phenomena at the junction where two nanofibers cross,” he said.

Experimenting with nanoscale fibers requires specialized micro-sized devices. Das designed and fabricated tiny machines— Micro-Electro-Mechanical Systems, or MEMS— that are smaller than one millimeter in size.

“In a previous study, we used a MEMS device to stretch a single collagen fiber,” he said. “In this study, we coupled two MEMS devices oriented orthogonally to push two fibers together and then separated them by sliding. While doing so we were able to simultaneously measure the force due to adhesion and due to friction. This was the first time such complete measurements were made possible for nanoscale fibers.

“From our experimental measurements, we calculated the size of the contact area that is formed between the two nanofiber surfaces at their junction. As we applied a sliding force, the contact started peeling until the sliding force suddenly dropped and an instability occurred, which shows how strong adhesive properties can be at the nanoscale.”

Das said, “A key finding from our experiments was that the critical sliding force divided by the contact area was equal to the shear yield stress of the polymer. As we pull or stretch a polymer, at a particular stress, it will start deforming plastically and won’t go back to its initial configuration. The stress at which the plastic deformation sets in is known as the yield stress of the polymer.”

According to Das, this is the first study to identify what is happening during the sliding of polymer nanofibers.

“We tested fibers with different diameters. Each time, we found that the sliding instability occurred at a particular value of the shear stress—the tangential force divided by the contact size—that is equal to the shear strength of the polymer. This was something we didn’t know before, although such a response had been reported before for metals.”

The study, “Sliding of adhesive nanoscale polymer contacts,” was written by Debashish Das and Ioannis Chasiotis. It is published in the Journal of the Mechanics and Physics.