A Tiny Instrument to Measure the Faintest Magnetic Fields 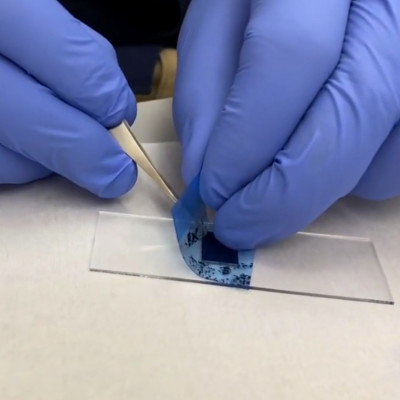 Physicists at the University of Basel have developed a minuscule instrument able to detect extremely faint magnetic fields. At the heart of the superconducting quantum interference device are two atomically thin layers of graphene, which the researchers combined with boron nitride. Instruments like this one have applications in areas such as medicine, besides being used to research new materials.

To measure very small magnetic fields, researchers often use superconducting quantum interference devices, or SQUIDs. In medicine, their uses include monitoring brain or heart activity, for example, while in the earth sciences researchers use SQUIDs to characterize the composition of rocks or detect groundwater flows. The devices also have a broad range of uses in other applied fields and basic research.

The team led by Professor Christian Schönenberger of the University of Basel’s Department of Physics and the Swiss Nanoscience Institute has now succeeded in creating one of the smallest SQUIDs ever built. The researchers described their achievement in the scientific journal Nano Letters.

A superconducting ring with weak links

A typical SQUID consists of a superconducting ring interrupted at two points by an extremely thin film with normal conducting or insulating properties. These points, known as weak links, must be so thin that the electron pairs responsible for superconductivity are able to tunnel through them. Researchers recently also began using nanomaterials such as nanotubes, nanowires or graphene to fashion the weak links connecting the two superconductors.

As a result of their configuration, SQUIDs have a critical current threshold above which the resistance-free superconductor becomes a conductor with ordinary resistance. This critical threshold is determined by the magnetic flux passing through the ring. By measuring this critical current precisely, the researchers can draw conclusions about the strength of the magnetic field.

“Our novel SQUID consists of a complex, six-layer stack of individual two-dimensional materials,” explains lead author David Indolese. Inside it are two graphene monolayers separated by a very thin layer of insulating boron nitride. “If two superconducting contacts are connected to this sandwich, it behaves like a SQUID – meaning it can be used to detect extremely weak magnetic fields.”

a) A conventional superconducting quantum interference device (SQUID) consists of a superconducting ring interrupted at two points by weak links (in this case a graphene layer). b) The new SQUID is made up of a stack of two-dimensional materials, including two graphene layers separated by a thin film of boron nitride.

In this setup, the graphene layers are the weak links, although in contrast to a regular SQUID they are not positioned next to each other, but one on top of the other, aligned horizontally. “As a result, our SQUID has a very small surface area, limited only by the constraints of nanofabrication technology,” explains Dr. Paritosh Karnatak from Schönenberger’s team.

The tiny device for measuring magnetic fields is only around 10 nanometers high – roughly a thousandth of the thickness of a human hair. The instrument can trigger supercurrents that flow in minuscule spaces. Moreover, its sensitivity can be adjusted by changing the distance between the graphene layers. With the help of electrical fields, the researchers are also able to increase the signal strength, further enhancing the measurement accuracy.

The Basel research team’s primary goal in developing the novel SQUIDs was to analyze the edge currents of topological insulators. Topological insulators are currently a focus of countless research groups all over the world. On the inside, they behave like insulators, while on the outside – or along the edges – they conduct current almost losslessly, making them possible candidates for a broad range of applications in the field of electronics.

“With the new SQUID, we can determine whether these lossless supercurrents are due to a material’s topological properties, and thereby tell them apart from non-topological materials. This is very important for the study of topological insulators,” remarked Schönenberger of the project. In future, SQUIDs could also be used as low-noise amplifiers for high-frequency electrical signals, or for instance to detect local brainwaves (magnetoencephalography), as their compact design means a large number of the devices can be connected in series.