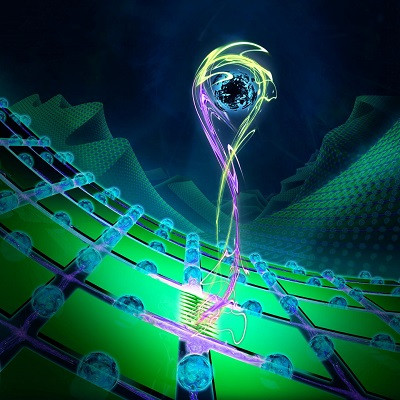 A paper recently published in Nature presents a protocol allowing for the error detection and the protection of quantum processors in case of qubit loss. This may prove to be essential for the future development of large-scale quantum computers.

Even quantum computers make mistakes. Their computing ability is extraordinary; indeed, it exceeds that of classical computers by far. This is because circuits in quantum computers are based on qubits that can represent not only 0s or 1s, but also superpositions of 0 and 1 states by using the principles of quantum mechanics. Despite their great potential, qubits are extremely fragile and prone to errors due to the interactions with the external environment.

To solve this crucial issue, an international research group developed and implemented a new protocol that allows for the protection and the correction of the fragile quantum information in case of errors due to qubit loss. This research group published the results of their study in Nature.

"Developing a fully functioning quantum processor still represents a great challenge for scientists across the world", explains Davide Vodola who is one of the authors of the study as well as a researcher at the University of Bologna. "This research allowed us, for the first time, to implement a protocol that can detect and, at the same time, correct errors due to qubit loss. This ability could prove to be essential for the future development of large-scale quantum computers".

We know that quantum processors show a certain tolerance against computational errors. But we know too little about how to prevent and correct the errors that are due to a complete or partial loss of qubits.

When quantum computers elaborate the data, some qubits can be completely lost from the quantum registers or they can transition to unwanted electronic states. The outcome of both these processes is a loss that may render the quantum processor useless. For this reason, devising theory-based and experimental techniques that can analyse and mitigate the consequences of these errors is extremely important.

"To solve this problem, the first thing our research group did was to develop an effective theoretical approach to the issue", says Vodola. "We managed to show that the information stored in a register with some qubits can be protected and fully retrieved in case one of these qubits gets lost".

Then, the research group implemented this protocol in a real-life quantum processor. This is not easy at all, however. Indeed, for assessing whether a qubit is lost, a direct measurement of it will destroy all the information that is contained in the quantum register.

The research group came up with the solution of using an additional qubit that functions as a probe and can assess the presence or absence of other qubits without altering the computing process. This idea worked, allowing the researchers to successfully test their protocol in real-time.

"We are happy with the results of this test on the trapped-ion quantum processor of the University of Innsbruck", confirms Vodola. "The same protocol can be implemented in different quantum computer architectures that are currently under development by other research centres or private institutions".

Read the original article on University of Bologna.