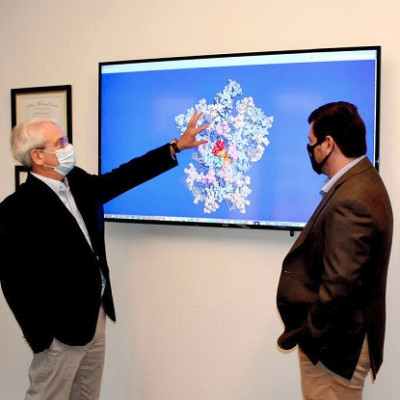 Nanovaccines consist of extremely small (nano) particles — similar in size to bacteria and viruses — used to display multiple copies of an antigen and able to elicit strong immune responses. The team previously reported on using DNA instructions to launch in vivo production of nanoparticle vaccines (DLnano-vaccines).

“We wanted to test DLnano-vaccines for cancer immunotherapy and obtain proof of concept that this platform could be successfully applied in the cancer field, thanks to its effectiveness at prompting CD8 T cells responses,” said Daniel Kulp, Ph.D., associate professor in Wistar’s Vaccine & Immunotherapy Center and co-corresponding author of the study, who specializes in nanotechnology and protein engineering for vaccine development.

Due to their ability to specifically kill malignant cells, CD8 T cells play a pivotal role in anticancer immunity, therefore engagement of these cells represents a necessary step for the success of anticancer vaccine approaches, although this type of immune response is typically difficult to achieve by vaccination with proteins or inactivated virus.

Researchers designed DLnano-vaccines displaying 60 copies of protein parts derived from the melanoma-specific antigens Trp2 and Gp100 and tested these in mouse models of melanoma, observing prolonged survival that depended on CD8 T cell activation both in therapeutic and prophylactic settings.

“One of the advantages of synthetic DNA technologies over other methods is the versatility of the platforms,” said Ziyang Xu, Ph.D., a recent doctoral graduate working at Wistar and the first author of the study. “DLnano-vaccines may be designed for various cancer targets and our study shows this is a promising strategy for cancer immunotherapy that may warrant further testing.”

To elucidate the mechanism through which DLnano-vaccines activate CD8 T cells, the team studied the effects of the DNA-launched version of a previously described HIV nanoparticle vaccine (eOD-GT8-60mer). They observed that DLnano-vaccines administered via electroporation resulted in transient muscle cell apoptosis that attracted macrophage infiltration at the injection site, which in turn was instrumental to activate CD8 T cells.

DLnano-vaccines were developed using synthetic DNA technology in collaboration with the lab of David B. Weiner, Ph.D., Wistar executive vice president, director of the Vaccine & Immunotherapy Center, and the W.W. Smith Charitable Trust Professor in Cancer Research and also a co-senior author on the study.

Study results were published online in Cancer Immunology Research, a journal of the American Association for Cancer Research, and support exploration of this immunotherapy approach for additional cancer types.

Read the original article on The Wistar Institute.