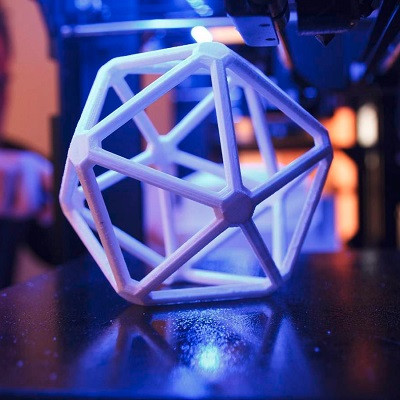 Researchers of Karlsruhe Institute of Technology (KIT) and Heidelberg University have developed a photoresist for two-photon microprinting. It has now been used for the first time to produce three-dimensional polymer microstructures with cavities in the nanorange.

In Advanced Materials, the scientists involved in the joint Cluster of Excellence 3D Matter Made to Order (3DMM2O) report how porosity can be controlled during printing and how this affects light scattering properties of the microstructures.

Photoresists are printing inks used to print smallest microstructures in three dimensions by so-called two-photon lithography. During printing, a laser beam is moved in all spatial directions through the initially liquid photoresist.

The photoresist hardens in the focal point of the laser beam only. Little by little, complex microstructures can be built in this way. In a second step, a solvent is used to remove those areas that were not exposed to radiation. Complex polymer architectures in the micrometer and nanometer ranges remain.

Two-photon polymerization - or two-photon microprinting based on this process - has been studied extensively for some years now, in particular as regards the production of microoptics, so-called metamaterials, and microscaffolds for experiments with single biological cells. To expand the spectrum of applications, new printable materials are required.

This is the point of departure of the scientists involved in the Cluster of Excellence 3D Matter Made to Order of KIT and Heidelberg University. “With the help of conventional photoresists, it was possible to print transparent, glassy polymers only,” says Frederik Mayer, physicist of KIT and main author of the study. “Our new photoresist for the first time enables printing of 3D microstructures from porous nanofoam. This polymer foam has cavities of 30 to 100 nm in size, which are filled with air.”

From Transparent to White

“There has never been a photoresist for 3D laser microprinting, with which “white” material can be printed,” Frederik Mayer points out. As in a porous eggshell, the many small air holes in the porous nanoarchitectures make them appear white. Mixing white particles into a conventional photoresist would not have this effect, because the photoresist must be transparent for the (red) laser beam during printing.

“Our photoresist,” Mayer says, “is transparent prior to printing, but the printed objects are white and have a high reflectivity.” The researchers from Karlsruhe and Heidelberg demonstrated this by printing an Ulbricht sphere (an optical component) as fine as a hair.

Another factor that opens up new applications is the extremely large internal surface area of the porous material. It might be useful for filtration processes on smallest space, highly water-repellent coatings, or the cultivation of biological cells.

The collaboration of three of the nine research thrusts of the Cluster of Excellence revealed the uses for which the novel photoresist is suited and how it can be applied in the best possible way. By means of electron microscopy scans and optical experiments, researchers showed how the cavities are distributed in printed structures and how their formation can be controlled by varying the printing parameters and in particular the intensity of the laser pulses. Work in the cluster of excellence was carried out by materials scientists from Heidelberg University as well as chemists and physicists from KIT.

Cluster of Excellence 3D Matter Made to Order

In the Cluster of Excellence 3D Matter Made to Order (3DMM2O), scientists of Karlsruhe Institute of Technology and Heidelberg University conduct interdisciplinary research into innovative technologies and materials for digital scalable additive manufacture to enhance the precision, speed, and performance of 3D printing.

Work is aimed at completely digitizing 3D manufacture and materials processing from the molecule to the microstructure. In addition to funding as a cluster of excellence under the Excellence Strategy competition launched by the federation and the federal states, 3DMM3O is financed by Carl Zeiss Foundation.