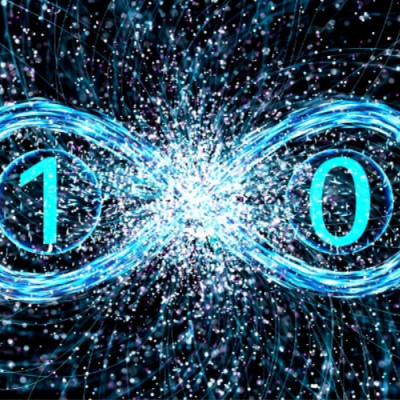 Researchers at the Microsoft Quantum Materials Lab and the University of Copenhagen, working closely together, have succeeded in realizing an important and promising material for use in a future quantum computer. For this end, the researchers have to create materials that hold the delicate quantum information and protect it from decoherence.

The so called topological states seem to hold this promise, but one of the challenges has been that a large magnetic field had to be applied. With the new material, it has become possible to realize topological states without the magnetic field. ”The result is one of many new developments needed before an actual quantum computer is realized, but along the way better understanding of how quantum systems work, and might be applied to medicine, catalysts or materials, will be some of the positive side effects to this research”, Professor Charles Marcus explains. The scientific article is now published in Nature Physics.

Illustration a: Graphic showing the three materials combined to form the new material. Al is aluminium – the superconductor, EuS is the new addition, europium sulfide – the ferromagnet, and InAs is indium arsenide – the semiconductor. In combination they allow for the existence of the desired Majorana zero modes, enabling the quantum wire device to be an integral component in a topological quantum computer. Illustration b: Electron micrograph showing the wire (blue/grey), between gate electrodes (yellow). The gate is necessary for controlling the density of the electrons, and electrons tunnel through the wire from the source (bias). The greatest advantage to this system is the fact that a large magnetic field has been made superfluous, as a magnetic field could have potential negative effects on other components close by. In other words, this result has made actual application much more likely. The length of the wire in the illustration is 2 micrometers = 0.002 millimeters and thickness 100 nanometers = 0.0001 millimeter.

Professor Charles Marcus explains the progress this way: “The combination of three components into a single crystal – semiconductor, superconductor, ferromagnetic insulator—a triple hybrid—is new. It’s great news that it forms a topological superconductor at low temperature. This gives us a new path to making components for topological quantum computing, and gives physicists a new physical system to explore”.

The new results will soon be applied to engineering the qubit
The next step will be to apply these results in order to get closer to realizing the actual working qubit. So far the researchers have worked on the physics and now they are about to embark on engineering an actual device. This device, the qubit, is essentially to a quantum computer what the transistor is to the ordinary computer we know today. It is the unit performing the calculations, but this is where the comparison ends. The potential for the performance of a quantum computer is so large that today we are not even really able to imagine the possibilities.

Collaboration is the key to success
Scientific results are more often than not the work of a close collaboration between many people. The myth about the lonely genius going “Heureka!”, is truly a myth. In this case, Professor Peter Krogstrup, Scientific Director at the Microsoft Materials Lab and Yu Liu, postdoc at the Niels Bohr Institute grew the materials, Saulius Vaitiekenas, Lead experimentalist at the Microsoft Quantum Materials Lab carried out the measurements and built the devices, and Professor Charles Marcus at the Niels Bohr Institute, along with everyone else, interpreted the ensuing data. Charles Marcus says: “There may be different roles and competences involved, but the process of collaborating on science is most times a very fluid and open ended process”.

Read the original article on University of Copenhagen.