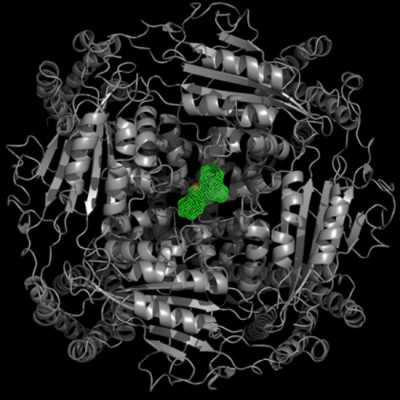 Tyrosine phosphorylation (pTyr) can initiate cellular signaling and govern cellular functions. Its dysregulation is implicated in many diseases, especially cancers. Specific detection of pTyr-is important for developing targeted anti-cancer drugs. Researchers developed a new approach based on a functional ion nanochannel platform for the specific sensing of tyrosine phosphorylation.

The commonly-used approach for detecting pTyr relies on the radiometric assay with [γ-32P]-ATP as a substrate, which suffers from the use of harmful radioactive reagent and generation of radioactive waste.

Antibody-based methods and some synthetic chemical sensors have also been developed to achieve specific detection of pTyr for kinase inhibitor screening assays. However, these methods are not cost-effective.

Recently, a research group led by Prof. QING Guangyan from the Dalian Institute of Chemical Physics (DICP) of the Chinese Academy of Sciences developed a new approach based on a functional ion nanochannel platform for the specific sensing of tyrosine phosphorylation. The results were published in Journal of the American Chemical Society on September. 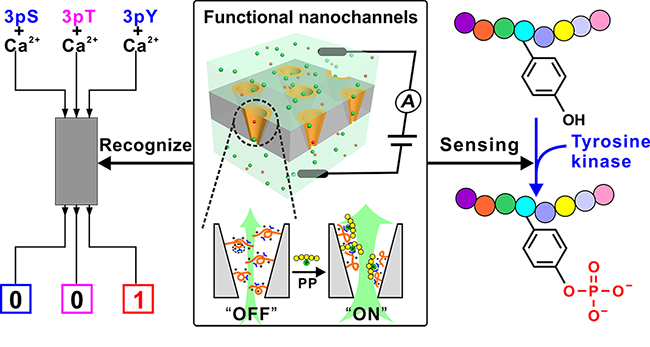 The polymer could recognize the phosphorylated peptide (PP) through the binding of guanidinium group with phosphate group in PP, and amplify such recognition to the conformational change of the polymer itself. Further, the conformational change was converted into the "OFF-ON" change of nanochannel ion flux, finally achieving the detection of PP by means of the change in ionic current.

The specific recognition for pTyr peptide from its counterparts pSer and pThr peptides was achieved by constructing a simple nanofluidic logic gate when Ca2+ was introduced as a competitive binding element.

Importantly, the excellent pTyr sensing capacity makes the functional nanochannels available for real-time monitoring of pTyr process by tyrosine kinase on a peptide substrate, even in a complicated condition, and the proof-of-concept study of monitoring kinase activity demonstrates its potential in kinase inhibitor screening.