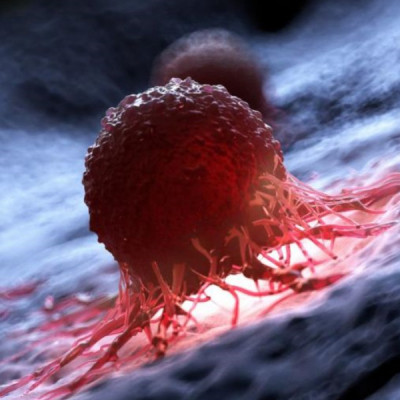 An interdisciplinary team of researchers from the Indian Institute of Science (IISc) has used a 3D tumour model and magnetically-driven nanomotors to probe the microenvironment of cancer cells. The team consists of researchers from the Centre for Nano Science and Engineering (CeNSE) and Department of Molecular Reproduction, Development and Genetics (MRDG).

In their work, published in Angewandte Chemie, the team steered helical nanomotors remotely via an external magnetic field through the tumour model to sense, map and quantify changes in the cellular environment. The model comprises both healthy and cancer cells embedded within a reconstituted basement membrane matrix, and mimics the breast cancer environment.

The study highlights a new way of targeting cancer cells by manoeuvering nanomotors inside a tumour and waiting for them to localise in the vicinity of the cancerous site. “We tried driving the nanomotors toward cancer cells in a tumour model and observed them getting stuck to the matrix near cancer cells, but this was not observed near normal cells,” says Debayan Dasgupta, a co-first author and PhD student at CeNSE. 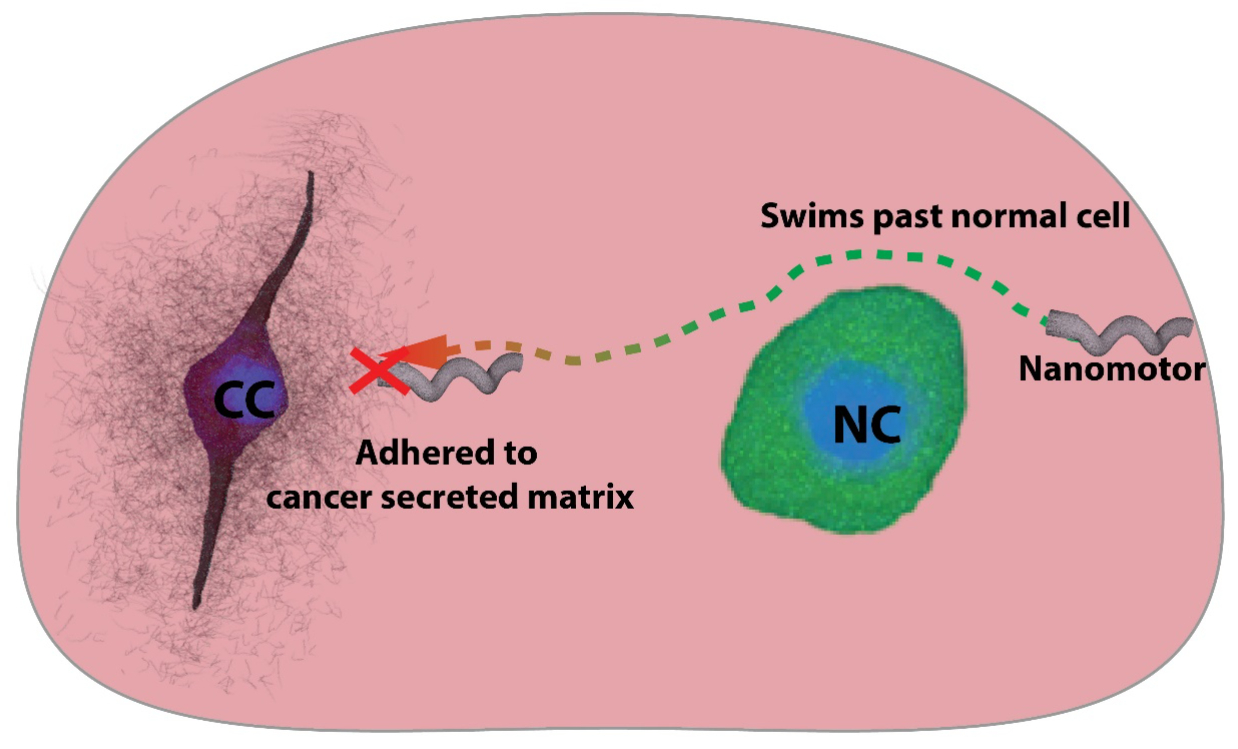 Nanomotors can swim past non-cancerous cells but adhere to the charged cancer secreted matrix in a tumor model. This can be used to localise a swarm of nanomotors near cancerous cells within a tumor (Credit: Debayan Dasgupta).

The extracellular matrix (ECM) is a complex 3D network of proteins and carbohydrates secreted by living cells into their neighbourhood. However, when cancer cells secrete fresh material into the ECM, it disrupts the chemical and physical composition of the native ECM surrounding healthy cells, degrading the local environment. Therefore, understanding how the cellular microenvironment is altered due to cancer cells and measuring these changes quantitatively could be vital in understanding the progression of cancer.

In the current study, the researchers discovered that as the nanomotors approached the cancer cell membrane, they stuck to the matrix more strongly than they would to normal cells. To measure how strongly the nanomotors bound to the matrix, the team calculated the magnetic field strength required to overcome the adhesive force, and move forward.

“This means that the cancer cells are doing something. So, we did some measurements and discovered that it [the adhesive force] depended on the type of cells, the strength of interaction and also which side of the cell the nanomotor approached,” explains Ambarish Ghosh, Associate Professor at CeNSE and one of the senior authors. “In the end, we really ended up discovering a physical property of an important biological environment.”

The reason why the nanomotors appear to stick to the cancer cells better is their charged ECM. This may be due to the presence of 2,3-linked sialic acid, a sugar-conjugated molecule which confers a negative charge on the cancer cell environment, the researchers found. They visualised the distribution of these sugars using fluorescent markers and found that sialic acids were distributed up to 40 micrometres from the cancer cell surface ‒ the same distance until which the nanomotors experienced strong adhesion.

To counter this adhesive effect, the team coated the nanomotors with Perfluorooctyltriethoxysilane (PFO) which shielded them from the charged environment. The coated nanomotors did not stick to the matrix near the cancer cells, whereas the uncoated motors clung to the matrix, confirming the fact that the negatively charged cancer microenvironment interacts with the incoming nanomotors, rendering them immobile.

“What came as a beautiful surprise was that within such a milieu, we found that aggressive cancer cells ended up remodelling their surroundings by making them stickier, and richer in specific charged sugars,” says Ramray Bhat, Assistant Professor at MRDG and one of the senior authors. “This charging can potentially be used to target and kill tiny populations of cancer cells hidden among their normal counterparts, for which we are extending these studies to living animals.”