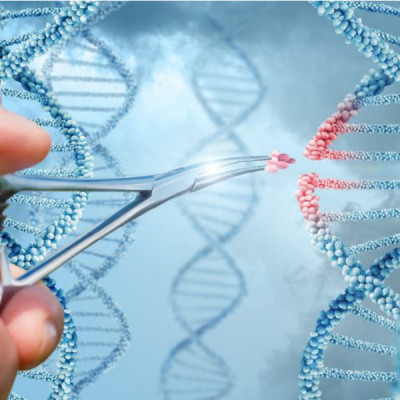 A newly developed light-sensing protein called the MCO1 opsin restores vision in blind mice when attached to retina bipolar cells using gene therapy. The National Eye Institute, part of the National Institutes of Health, provided a Small Business Innovation Research grant to Nanoscope, LLC for development of MCO1. The company is planning a U.S. clinical trial for later this year.

Nanoscope’s findings, reported today in Nature Gene Therapy, show that totally blind mice—meaning they have no light perception—regain significant retinal function and vision after treatment. Studies described in the report showed that treated mice were significantly faster in standardized visual tests, such as navigating mazes and detecting changes in motion.

Opsins are proteins that signal other cells as part of a cascade of signals essential to visual perception. In a normal eye, opsins are expressed by the rod and cone photoreceptors in the retina. When activated by light, the photoreceptors pulse and send a signal through other retinal neurons, the optic nerve, and on to neurons in the brain. 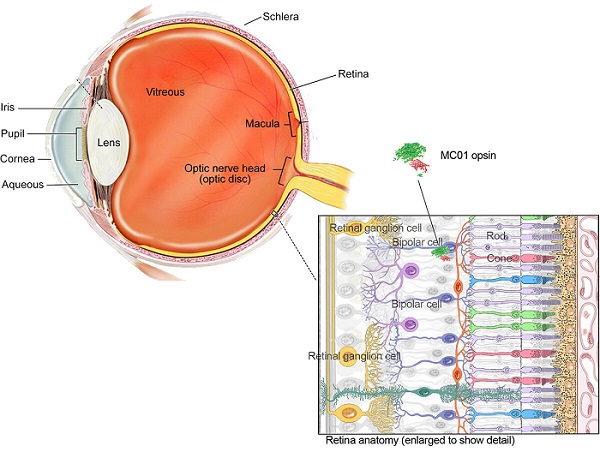 “The beauty of our strategy is its simplicity,” said Samarendra Mohanty, Ph.D., Nanoscope founder and corresponding author of a report on the mouse study that appears today in Nature Gene Therapy. “Bipolar cells are downstream from the photoreceptors, so when the MCO1 opsin gene is added to bipolar cells in a retina with nonfunctioning photoreceptors, light sensitivity is restored.”

The strategy could overcome challenges plagued by other approaches to retinal regeneration, according to the researchers. Gene replacement therapy has thus far worked principally in rare diseases that leave photoreceptors intact, such as Luxurna for Leber congenital amaurosis. Bionic eyes, such as the Argus II retinal prosthesis, require invasive surgery and wearable hardware. Other opsin replacement therapies require the intensification of light in order to reach the threshold required for signal transduction. Intense light risks further damage to the retina. Nanoscope’s therapy requires a one-time injection into the eye and no hardware. MCO1 is sensitive to ambient light, so no need exists for strong light to be shined into the eye. And therapy with MCO1 could treat a wider range of degenerative retinal diseases, since photoreceptor survival not required.

The researchers found no concerning safety issues in treated mice. Examination of blood and tissues found no signs of inflammation due to treatment and the therapy had no off-target effect — only bipolar cells expressed the MCO1 opsin.

Under a best-case scenario, the therapy could help patients achieve 20/60 vision, according to the researchers; however, no one knows how the restored vision will compare to normal vision.

“A clinical study in people will help us understand how signaling through bipolar cells affects vision quality; for example, how well treated eyes can pick out fast-moving objects.,” said Subrata Batabyal, Ph.D., lead author of the manuscript.  The therapy will likely be limited for treatment of patients with severe retinal disease.

“If this optogenetic approach using cells spared in degenerated retina can prove to be effective in vision restoration in humans, beyond light perception, it could offer a valuable alternative to the retinal prosthesis approach for people with late-stage retinitis pigmentosa,” said PaekGyu Lee, Ph.D., NEI’s program officer for the Small Business Innovation Research program.

This press release describes a basic research finding. Basic research increases our understanding of human behavior and biology, which is foundational to advancing new and better ways to prevent, diagnose, and treat disease. Science is an unpredictable and incremental process— each research advance builds on past discoveries, often in unexpected ways. Most clinical advances would not be possible without the knowledge of fundamental basic research.

The Small Business Innovation Research (SBIR) program is a competitive awards-based funding mechanism that supports U.S.-based small businesses engaged in research and development that has the potential for commercialization. The NEI SBIR program specifically provides funding to companies developing technologies and innovations relating to blinding eye diseases, visual disorders preservation of sight, and addressing the special health problems and requirements of individuals with impaired vision.

Read the original article on National Institutes of Health (NIH).