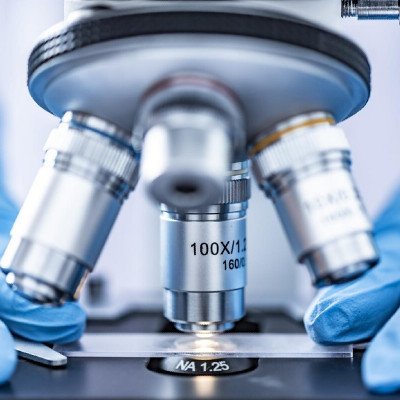 A group of researchers at Kaunas University of Technology (KTU) Institute of Materials Science created new graphene and silicon Schottky contact-based infrared radiation sensors that are more effective than the infrared sensors currently used in the market.

Earth observations from space, interplanetary missions to explore atmosphere in other planets or to search for life on Mars – all of this would not happen without infrared sensors installed in various devices. The sensors are also used in night vision devices, building energy-efficient control systems, optical communication lines, motion sensors and medicine.

Airports today use such sensors for remote measurement of the body temperature of passengers to identify people who are infected with the Covid-19 virus. Researchers from Kaunas University of Technology (KTU) have been working on improving these sensors for the last couple of years.

Compared to other infrared sensors, Schottky contact sensors’ manufacturing technology is quite simple, according to Dr Šarūnas Meškinis, the Principal Investigator of the research group. Many arrays of these sensors can be made on the semiconductor, for example, silicon, plates. An important advantage of Schottky contact sensors is fast switching speed.

“However, one of the main drawbacks of these sensors is low sensitivity. That is because they can convert only a small fraction of light particles – photons – into photoelectrons. Therefore, we decided to fabricate nanostructured metal plasmonic absorber on the graphene, thus increasing the sensitivity of these sensors”, says Dr Meškinis.

Application of sensors – from meteorological to space observations

Schottky contact photosensors can be used in artificial earth satellites, to monitor water and land boundaries, forest fires, lava flows. They are also used in meteorology, to assess water level in plants and soil, in geology, in optical communication systems.

“These sensors are used to study other planets: mineralogical analysis, atmospheric phenomena in planetary atmospheres, and for finding possible signs of life. They are important to many types of research in space”, says Dr Meškinis.

Sensors, created by KTU researchers, can be applied in many ways. According to Dr Meškinis, first in consideration is to adapt these sensors in optical coding. Optical coders are high precision optomechanical devices, designed to measure minimum displacement, distances, the precision of the mechanical devices and their components while also their rotational speed.

The Schottky contact sensor usually consists of the layer of metal grown on a semiconductor. This metal creates an electric field in the semiconductor surface layer.

Graphene-silicon infrared sensor (view from above)

“When photoelectrons – free electrons released from an atom by light – are created in the metal or this semiconductor surface layer, they can be extracted by an electric field and form a so-called photocurrent that can be measured and used to evaluate light intensity (including infrared radiation),” says Dr Meškinis.

Since conventional sensors can convert only a small fraction of light particles – photons ­– into photoelectrons, researchers have decided to use graphene instead of metal to address this problem and this way to increase the sensitivity of such sensors.

However, the ultra-small thickness of the graphene is also an important issue to address. One layer of graphene can absorb only 2.3 per cent of the photons that reaches it.

“We solved this problem by forming special metal nanostructures on graphene, known as plasma nanostructured liquids. They increased the sensitivity of the photosensors,” explains the researcher.

Read the original article on Kaunas University of Technology (KTU).