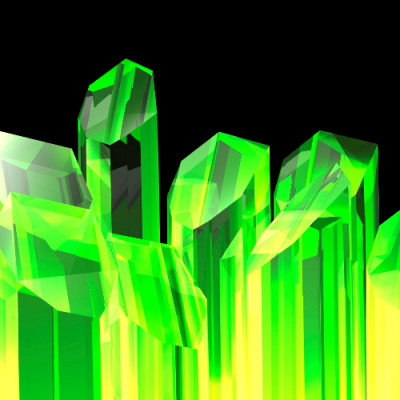 A thin coating of the 2D nanomaterial hexagonal boron nitride is the key ingredient in a cost-effective technology developed by Rice University engineers for desalinating industrial-strength brine.

More than 1.8 billion people live in countries where fresh water is scarce. In many arid regions, seawater or salty groundwater is plentiful but costly to desalinate. In addition, many industries pay high disposal costs for wastewater with high salt concentrations that cannot be treated using conventional technologies. Reverse osmosis, the most common desalination technology, requires greater and greater pressure as the salt content of water increases and cannot be used to treat water that is extremely salty, or hypersaline.

Hypersaline water, which can contain 10 times more salt than seawater, is an increasingly important challenge for many industries. Some oil and gas wells produce it in large volumes, for example, and it is a byproduct of many desalination technologies that produce both freshwater and concentrated brine. Increasing water consciousness across all industries is also a driver, said Rice’s Qilin Li, co-corresponding author of a study about Rice’s desalination technology published in Nature Nanotechnology.

“It’s not just the oil industry,” said Li, co-director of the Rice-based Nanotechnology Enabled Water Treatment Center (NEWT). “Industrial processes, in general, produce salty wastewater because the trend is to reuse water. Many industries are trying to have ‘closed loop’ water systems. Each time you recover freshwater, the salt in it becomes more concentrated. Eventually the wastewater becomes hypersaline and you either have to desalinate it or pay to dispose of it.”

One of NEWT’s technologies is an off-grid desalination system that uses solar energy and a process called membrane distillation. When the brine is flowed across one side of a porous membrane, it is heated up at the membrane surface by a photothermal coating that absorbs sunlight and generates heat. When cold freshwater is flowed across the other side of the membrane, the difference in temperature creates a pressure gradient that drives water vapor through the membrane from the hot to the cold side, leaving salts and other nonvolatile contaminants behind.

A large difference in temperature on each side of the membrane is the key to membrane desalination efficiency. In NEWT’s solar-powered version of the technology, light-activated nanoparticles attached to the membrane capture all the necessary energy from the sun, resulting in high energy efficiency. Li is working with a NEWT industrial partner to develop a version of the technology that can be deployed for humanitarian purposes. But unconcentrated solar power alone isn’t sufficient for high-rate desalination of hypersaline brine, she said.

“The energy intensity is limited with ambient solar energy,” said Li, a professor of civil and environmental engineering. “The energy input is only one kilowatt per meter square, and the production rate of water is slow for large-scale systems.”

Adding heat to the membrane surface can produce exponential improvements in the volume of freshwater that each square foot of membrane can produce each minute, a measure known as flux. But saltwater is highly corrosive, and it becomes more corrosive when heated. Traditional metallic heating elements get destroyed quickly, and many nonmetallic alternatives fare little better or have insufficient conductivity.

“We were really looking for a material that would be highly electrically conductive and also support large current density without being corroded in this highly salty water,” Li said. 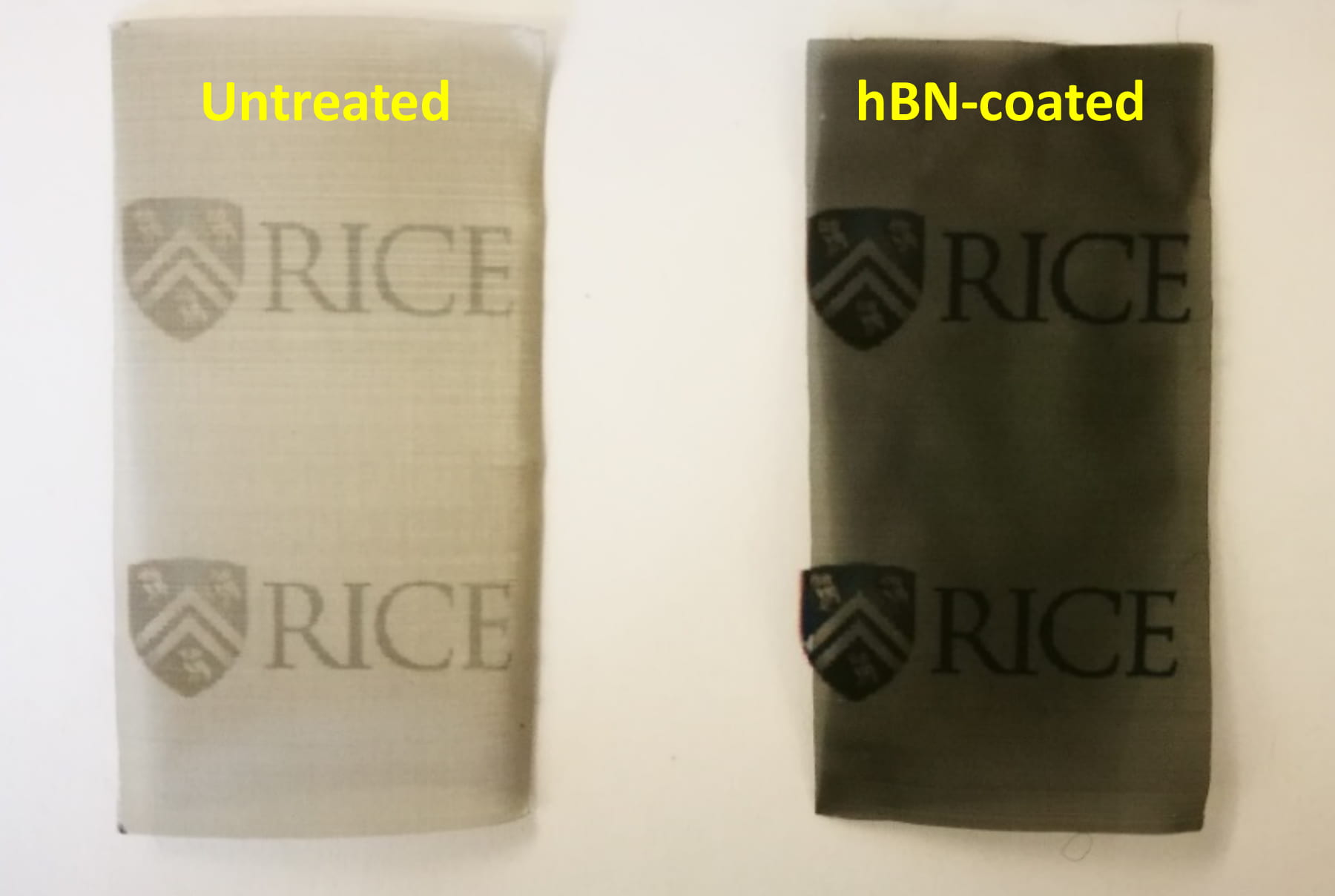 Boron nitride’s combination of chemical resistance and thermal conductivity has made its ceramic form a prized asset in high-temperature equipment, but hBN, the atom-thick 2D form of the material, is typically grown on flat surfaces.

“This is the first time this beautiful hBN coating has been grown on an irregular, porous surface,” Li said. “It’s a challenge, because anywhere you have a defect in the hBN coating, you will start to have corrosion.”

Jia and Wang used a modified chemical vapor deposition (CVD) technique to grow dozens of layers of hBN on a nontreated, commercially available stainless steel mesh. The technique extended previous Rice research into the growth of 2D materials on curved surfaces, which was supported by the Center for Atomically Thin Multifunctional Coatings, or ATOMIC. The ATOMIC Center is also hosted by Rice and supported by the NSF’s Industry/University Cooperative Research Program.

The researchers showed that the wire mesh coating, which was only about one 10-millionth of a meter thick, was sufficient to encase the interwoven wires and protect them from the corrosive forces of hypersaline water. The coated wire mesh heating element was attached to a commercially available polyvinylidene difluoride membrane that was rolled into a spiral-wound module, a space-saving form used in many commercial filters. 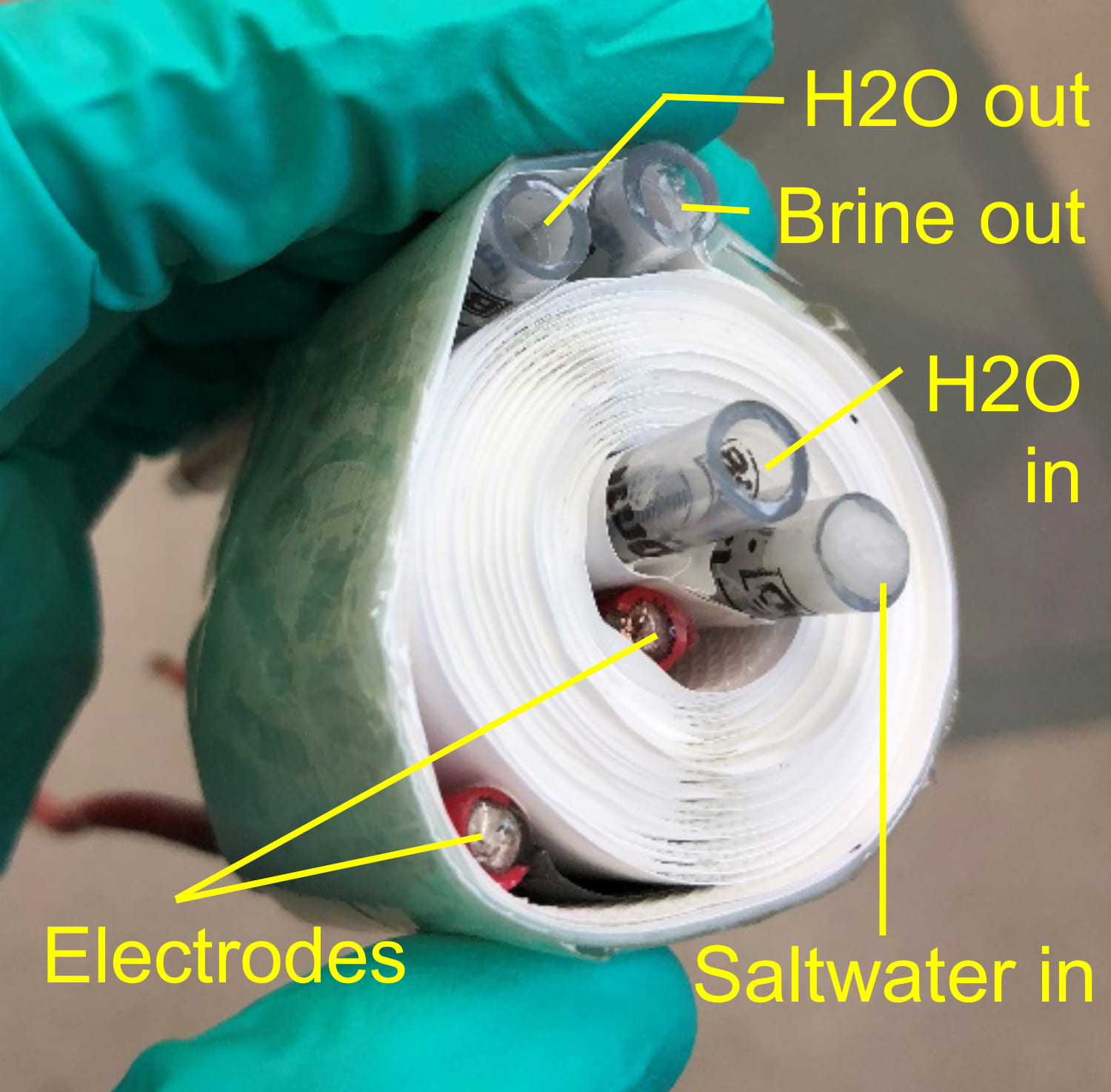 A coiled distillation membrane system for desalinating hypersaline brine. Rolling the system into a coil demonstrated the possibility of adopting a common space-saving, water-filtration format.

In tests, researchers powered the heating element with voltage at a household frequency of 50 hertz and power densities as high as 50 kilowatts per square meter. At maximum power, the system produced a flux of more than 42 kilograms of water per square meter of membrane per hour — more than 10 times greater than ambient solar membrane distillation technologies — at an energy efficiency much higher than existing membrane distillation technologies.

Li said the team is looking for an industry partner to scale up the CVD coating process and produce a larger prototype for small-scale field tests.

“We’re ready to pursue some commercial applications,” she said. “Scaling up from the lab-scale process to a large 2D CVD sheet will require external support.”

NEWT is a multidisciplinary engineering research center launched in 2015 by Rice, Yale University, Arizona State University and the University of Texas at El Paso that was recently awarded a five-year renewal grant for $16.5 million by the National Science Foundation. NEWT works with industry and government partners to produce transformational technology and train engineers who are ready to lead the global economy.