Lithium-ion batteries are the major rechargeable power source for many portable devices as well as electric vehicles, but their use is limited because they do not provide high power output while simultaneously allowing reversible energy storage. The research reported in Applied Physics Reviews aims to offer a solution by showing how the inclusion of conductive fillers improves battery performance.

The optimum battery design involves thick electrode structures. This enhances the energy density, but the design suffers from poor lithium-ion transport, a key step in the functioning of these electrodes. Various improvement techniques have been tried, including building vertically aligned channels or creating pores of the proper size to facilitate transport of the lithium ions.

Another approach involves the use of fillers made of carbon that conduct electricity. This study considered three types of fillers: single-walled carbon nanotubes (SWCNTs), graphene nanosheets, and a substance known as Super P, a type of carbon black particles produced during oxidation of petroleum precursors. Super P is the most commonly used conductive filler in lithium-ion batteries.

The fillers were added to a type of electrode material known as NCM that contains nickel, cobalt, and manganese. The investigators examined the resulting composites with scanning electron microscopy. The Super P and NCM particles were found to be arranged in a point-to-point contact mode. 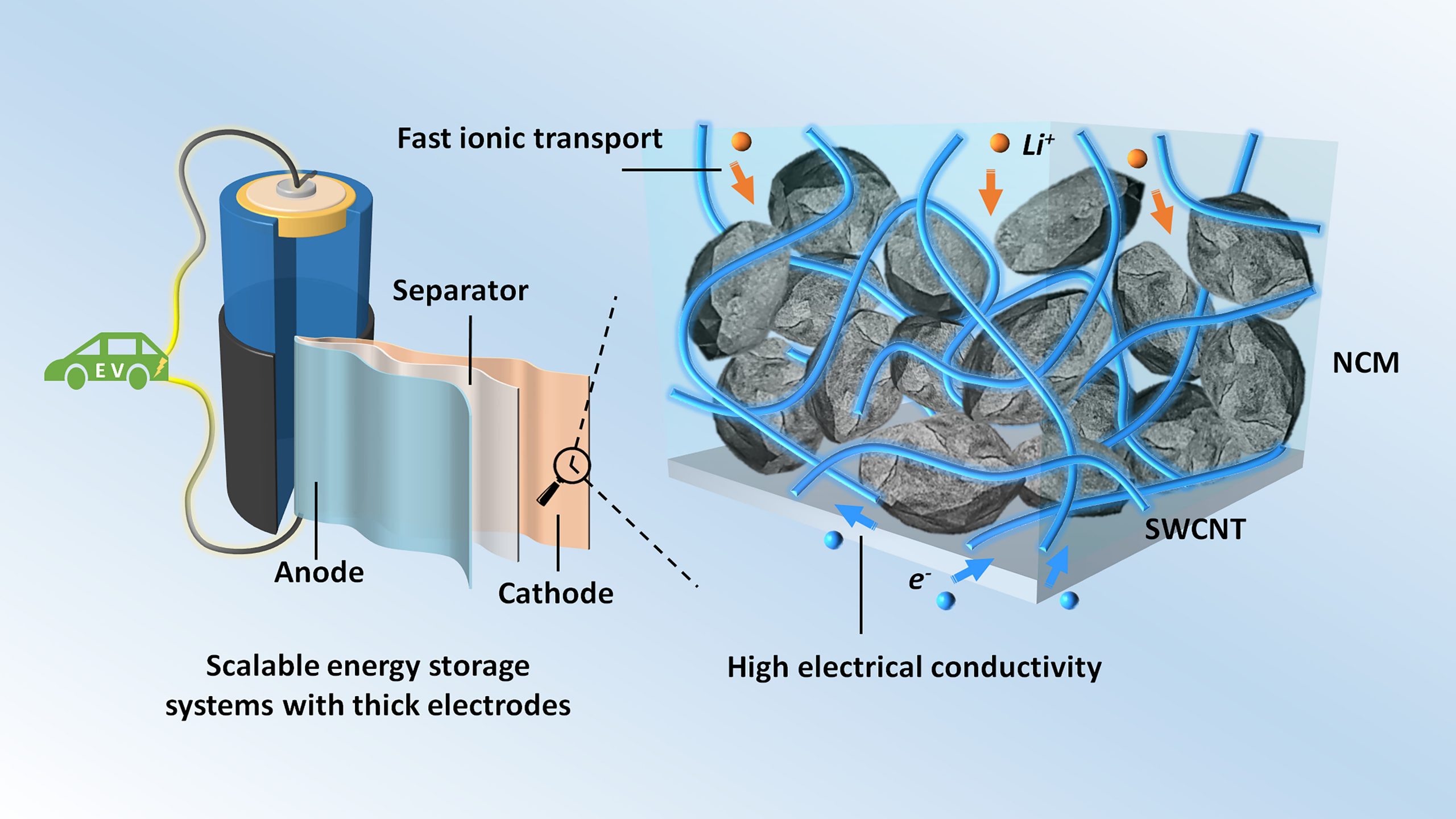 The SWCNTs were found to be the best conductive filler for NCM electrodes.

“The measured conductivity is consistent with percolation theory … When an electrically conductive filler is added to an insulating matrix, significant increases in conductivity will occur once the first conducting pathway through the composite is formed,” said Guihua Yu, one of the authors.

Since percolation requires a complete pathway through the filler, a sufficient amount of conductive filler is needed. Therefore, the investigators considered various amounts of filler and found that combining NCM electrodes with as little as 0.16% by weight of SWCNT produced good electrical conductivity. Higher amounts of Super P and graphene were required to achieve these same results.

“This is a collaborative effort from the Center for Mesoscale Transport Properties, an Energy Frontier Research Center supported by the U.S. Department of Energy Basic Energy Sciences program. Our findings suggest that the integration of SWCNTs into the NCM electrode facilitate ion and charge transfer. This will lead to higher electrochemical utilization, especially at high rates of discharge,” Yu said.