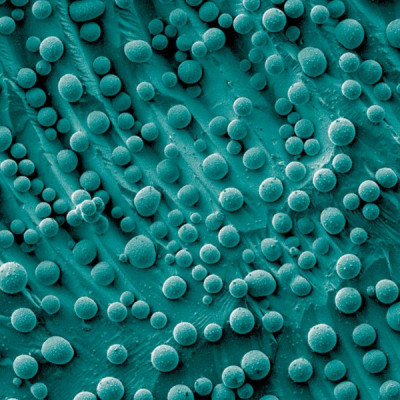 Special anti-counterfeiting and chemical sensing tools that we can use with our eyes could be created thanks to a new nanoscale building method.

In a world-first, researchers at the ARC Centre of Excellence in Exciton Science have been able to arrange tiny rods made from gold in exact patterns, and in numbers large enough for practical use. The results have been published in the journal Advanced Functional Materials.

Importantly, these gold rods can be arranged to generate a variety of colours, which change according to how they are viewed.

That makes them a great anti-counterfeiting feature. For example, if used on a banknote or passport, they could be helpful for cashiers or customs agents.

They can also be modified to turn different colours in the presence of chemicals, acting as a warning for dangerous levels of carbon monoxide and other gases.

Although these effects have been observed before, it was not possible to make them at a size visible to the naked eye. A new approach to chemical assembly was needed.

Consider this: Getting the bricks in a house to match is simple enough. Go a bit smaller, and kids can do the same with Lego. But how do you build things accurately at the nanoscale?

A nanometre is approximately one billionth the size of a metre. To put things in perspective, a sheet of paper is about 100,000 nanometres thick, and your fingernails grow about one nanometre every second. So, unless you’re Ant Man and can shrink to the subatomic level, it’s a tough task.

But fortunately, you don’t need to be an Avenger to get the job done. Lead author Heyou Zhang, a PhD candidate at The University of Melbourne, has used a technique called electrophoretic deposition (EPD).

“The whole idea of my PhD is to be able to better control single nanoparticles. Builders construct houses, brick by brick, and they can put each brick where they want. I want to use nanoparticles in a similar way,” Heyou said.

“But at the nanometre scale, you can’t move nanoparticles yourself. They are invisible. You need to use a method to drive or push the particle into a certain position.”

EPD involves applying an electric field of a certain strength to the materials, and using the separation of positive and negative charges to push the rods into place.

With the technique, Heyou and his colleagues are able to build collections of over one million nanorods per square millimetre, in patterns of their choosing.

As well as anticounterfeiting and chemical sensing, the assembly method could have applications in renewable energy, smart phones, laptops and efficient lighting.