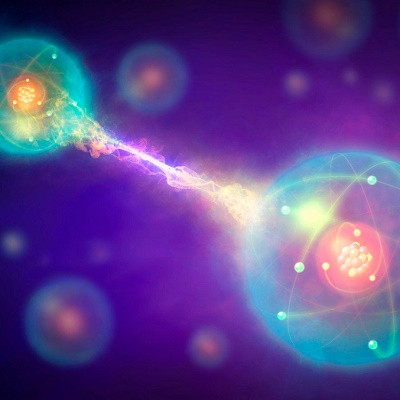 Materials scientists at Duke University have devised a simplified method for calculating the attractive forces that cause nanoparticles to self-assemble into larger structures.

With this new model, accompanied by a graphical user interface that demonstrates its power, researchers will be able to make previously impossible predictions about how nanoparticles with a wide variety of shapes will interact with one another. The new method offers opportunities for rationally designing such particles for a wide range of applications from harnessing solar energy to driving catalytic reactions.

The results appear online on November 12 in the journal Nanoscale Horizons. 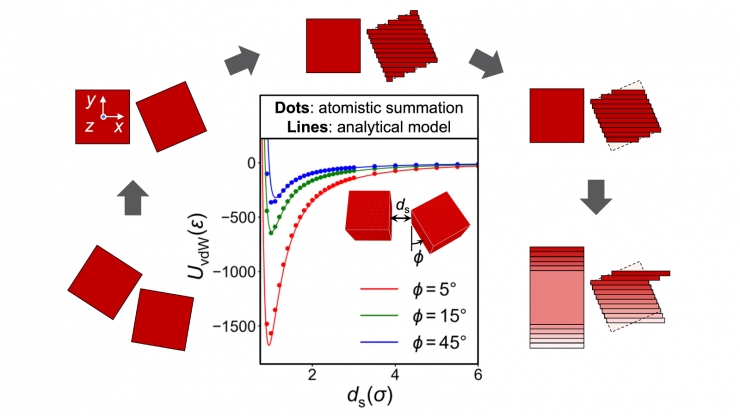 Overview of the approach used for deriving analytical expressions for the interparticle van der Waals interaction potential for faceted nanoparticles. The model goes through a series of simplifications. One block is normalized in a standard position. The other block is then assumed to be a grouping of rods. Any rods outside the boundaries of the first block are assumed to be negligible. The first block is shifted to be centered on each rod of the second block while its forces are being calculated and summed.

“Faceted nanoparticles can lead to novel assembly behaviors, which haven’t been explored in the past,” said Brian Hyun-jong Lee, a mechanical engineering and materials science graduate student at Duke and first author of the paper. “Cubes, prisms, rods and so on all exhibit distinct distance- and orientation-dependent interparticle interactions that can be utilized to create unique particle assemblies that one cannot obtain through self-assembly of spherical particles.”

“Every time I go through the latest set of published papers in nanotechnology, I see some new application of these types of nanoparticles,” added Gaurav Arya, associate professor of mechanical engineering and materials science at Duke. “But accurately calculating the forces that pull these particles together at very close range is extremely computationally expensive. We have now demonstrated an approach that speeds those calculations up by millions of times while only losing a small amount of accuracy.”

The forces at work between nanoparticles are called van der Waals forces. These forces arise because of small, temporary shifts in the density of electrons orbiting atoms according to the complex laws of quantum physics. While these forces are weaker than other intermolecular interactions such as coulombic forces and hydrogen bonds, they are ubiquitous and act between each and every atom, often dominating the net interaction between particles.

To properly account for such forces between particles, one must calculate the van der Waals force that every atom in the particle exerts on every atom in a nearby particle. Even if both of the particles in question were miniscule cubes of sizes smaller than 10 nanometers , the number of calculations summing all such interatomic interactions would be in the tens of millions.

It’s easy to see why trying to do this over and over for thousands of particles located at different positions and in different orientations in a multiparticle simulation quickly becomes impossible.

“Lots of work has been done to formulate a summation that gets close to an analytical solution,” said Arya. “Some approaches treat particles as made up of infinitesimally small cubes stuck together. Others try to fill space with infinitesimally thin circular rings. While these volume-discretization strategies have allowed researchers to obtain analytical solutions for interactions between simple particle geometries like parallel flat surfaces or spherical particles, such strategies cannot be used to simplify the interactions between faceted particles due to their more complex geometries.”

To skirt around this issue, Lee and Arya took a different approach by making several simplifications. The first step involves representing the particle as being made up not of cubic elements, but of rod-shaped elements of various lengths stacked together. The model then assumes that rods whose projections fall outside the projected boundary of the other particle contribute negligibly to the overall interaction energy.

The energies contributed by the remaining rods are further assumed to equal the energies of rods of uniform lengths located the same normal distance as the actual rods, but with zero lateral offset. The final trick is to approximate the distance-dependence of the rod-particle energy using power-law functions that have closed-form solutions when distances vary linearly with the lateral position of the actual rods, as is case with the flat interacting surfaces of faceted particles.

After all of these simplifications are made, analytical solutions for the interparticle energies can be obtained, allowing a computer to breeze through them. And while it may sound like they would introduce a large amount of error, the researchers found that the results were only 8% off on average from the actual answer for all particle configurations, and only 25% different at their worst.

While the researchers primarily worked with cubes, they also showed that the approach works with triangular prisms, square rods and square pyramids. Depending on the shape and material of the nanoparticles, the modeling approach could impact a wide range of fields. For example, silver or gold nanocubes with edges close to one another can harness and focus light into tiny “hotspots,” creating an opportunity for better sensors or catalyzing chemical reactions.

“This is the first time that anyone has proposed an analytical model for van der Waals interactions between faceted particles,” said Arya. “Even though we are yet to apply it for computing interparticle forces or energies within molecular dynamics or Monte Carlo simulations of particle assembly, we expect the model to speed up such simulations by as much as ten orders of magnitude.”