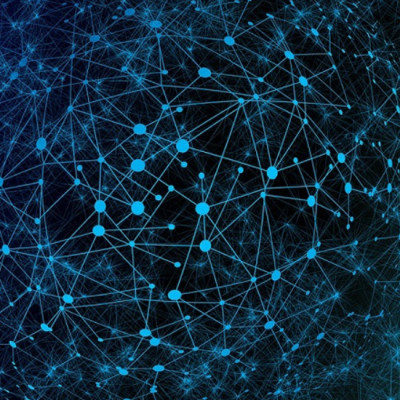 Transistors can have just two values: 0 or 1. Our brains process information via neurons, which are more complicated: they can have any intermediate value, based on the memory of the input they received in the long-term or short-term past. Scientists are trying to build transistors with a similar type memory, called memristors. One interesting material for creating memristive devices is strontium titanium oxide. Scientists from the University of Groningen discovered how this material can change its resistance based on changes in the number of electrons or the accumulation of defects created by the absence of oxygen atoms in the crystal structure. These insights, derived by combining strontium titanium oxide with the 2D material graphene, could lead to the creation of memristors responding at different timescales, corresponding to short-term and long-term memory.

Scientists are working on new materials to create neuromorphic computers, with a design based on the human brain. A crucial component is a memristive device, the resistance of which depends on the history of the device – just like the response of our neurons depends on previous input. Materials scientists from the University of Groningen analysed the behaviour of strontium titanium oxide, a platform material for memristor research and used the 2D material graphene to probe it. On 11 November 2020, the results were published in the journal ACS Applied Materials and Interfaces.

Computers are giant calculators, full of switches that have a value of either 0 or 1. Using a great many of these binary systems, computers can perform calculations very rapidly. However, in other respects, computers are not very efficient. Our brain uses less energy for recognizing faces or performing other complex tasks than a standard microprocessor. That is because our brain is made up of neurons that can have many values other than 0 and 1 and because the neurons’ output depends on previous input.

To create memristors, switches with a memory of past events, strontium titanium oxide (STO) is often used. This material is a perovskite, whose crystal structure depends on temperature, and can become an incipient ferroelectric at low temperatures. The ferroelectric behaviour is lost above 105 Kelvin. The domains and domain walls that accompany these phase transitions are the subject of active research. Yet, it is still not entirely clear why the material behaves the way it does. ‘It is in a league of its own,’ says Tamalika Banerjee, Professor of Spintronics of Functional Materials at the Zernike Institute for Advanced Materials, University of Groningen.

The oxygen atoms in the crystal appear to be key to its behaviour. ‘Oxygen vacancies can move through the crystal and these defects are important,’ says Banerjee. ‘Furthermore, domain walls are present in the material and these move when a voltage is applied to it.’ Numerous studies have sought to find out how this happens, but looking inside this material is complicated. However, Banerjee’s team succeeded in using another material that is in a league of its own: graphene, the two-dimensional carbon sheet. 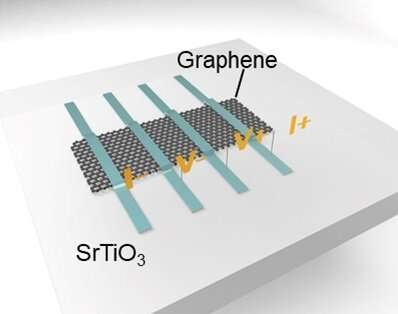 The combination with graphene opens up a new path to memristive heterostructures combining ferroelectric materials and 2D materials.

‘The properties of graphene are defined by its purity,’ says Banerjee, ‘whereas the properties of STO arise from imperfections in the crystal structure. We found that combining them leads to new insights and possibilities.’ Much of this work was carried out by Banerjee’s PhD student Si Chen. She placed graphene strips on top of a flake of STO and measured the conductivity at different temperatures by sweeping a gate voltage between positive and negative values. ‘When there is an excess of either electrons or the positive holes, created by the gate voltage, graphene becomes conductive,’ Chen explains. ‘But at the point where there are very small amounts of electrons and holes, the Dirac point, conductivity is limited.’

In normal circumstances, the minimum conductivity position does not change with the sweeping direction of the gate voltage. However, in the graphene strips on top of STO, there is a large separation between the minimum conductivity positions for the forward sweep and the backward sweep. The effect is very clear at 4 Kelvin, but less pronounced at 105 Kelvin or at 150 Kelvin. Analysis of the results, along with theoretical studies carried out at Uppsala University, shows that oxygen vacancies near the surface of the STO are responsible.

Chen also carried out another experiment: ‘We kept the STO gate voltage at -80 V and measured the resistance in the graphene for almost half an hour. In this period, we observed a change in resistance, indicating a shift from hole to electron conductivity.’ This effect is primarily caused by the accumulation of oxygen vacancies at the STO surface.

All in all, the experiments show that the properties of the combined STO/graphene material change through the movement of both electrons and ions, each at different time scales. Banerjee: ‘By harvesting one or the other, we can use the different response times to create memristive effects, which can be compared to short-term or long-term memory effects.’ The study creates new insights into the behaviour of STO memristors. ‘And the combination with graphene opens up a new path to memristive heterostructures combining ferroelectric materials and 2D materials.’