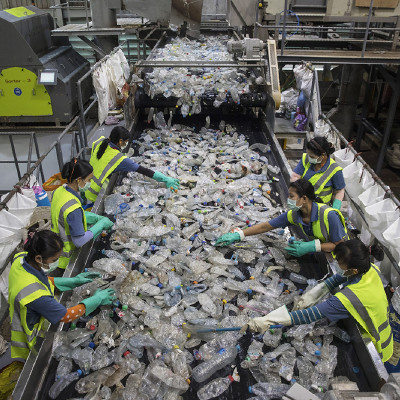 The Welsh government is backing a cutting-edge science project at Swansea University that changes waste plastics into highly valuable compounds for the energy industries.

The government is to invest in a plastics upscaling project which has the potential to create highly-skilled jobs in Wales.

Scientists are extracting carbon atoms found in waste plastics and turning them into a nanotube format that can be used for the transmission of electricity.

They are producing plastic electric cables without the copper wire inside them, which can be used in residential and industrial construction.

Senior Lecturer, Dr. Alvin Orbaek White, who was recruited to Wales from the Massachusetts Institute of Technology as part of Wales Rising Star program as a Sêr Cymru II Fellow, is leading the research group at the Energy Safety Research Institute in Swansea University.

Dr. Orbaek White has already developed an electrical wire made out of carbon nanotubes from waste plastics that are suitable for electricity and data transmission.

His cables are transmitting Bach’s cello music, and were displayed at Swansea’s National Waterfront Museum, and are currently being exhibited in the Material Library at Material ConneXion⁠ in New York.

Scientists are extracting carbon atoms found in waste plastics and turning them into a nanotube format that can be used to transmit electricity.

Dr. Orbaek White, whose first scientific publication elaborated on the conversion of black plastic material that he purchased in a local supermarket, said:

“Converting plastics into useful materials such as carbon nanotubes can be done with a large variety of plastics. Our team has expanded the list of problem plastics to include PVdC - Polyvinyl chloride, polyesters, and polypropylene to name a few.”

This is good news for employment and also for nature as waste plastics are clogging landfills and polluting oceans.

TrimTabs, a Swansea engineering firm creating technology solutions for positive global impact, is collaborating on the project and stated: “We are very excited about this research. This kind of fundamental science is needed in order to break out of the current recycling loop.”

“This grant will be used to test a large range of plastics that are problematic for traditional recycling technologies. The key philosophy is to seek a solution from within the problem.

Plastics are a resource of carbon and hydrogen so the key step is in developing methods of chemistry and engineering to fashion the carbon and the hydrogen into more useful materials; in this case, they make graphene, vapor-grown carbon fibers, and carbon nanotubes.

This capital grant will be used to test the electrical and physical properties of the carbon nanotube wires, to purchase testing equipment to ensure high-quality materials are being produced from the plastics, and to advance the ability for a closed-loop chemical recycling process. This grant is an indicator of the Welsh Government’s long-term strategy of plastic recycling in a circular manner.”

“I believe that this project is a unique approach to changing the conversation from plastic being a waste to plastic waste being a substitute for hydrocarbon resources.”

“Dr. Orbaek White’s research tackles two important problems facing the environment: a transition to more efficient, cleaner energy resources and providing a new life for waste plastics, keeping them out of land and sea. This project is an example of the future we all hope for- one where waste materials are redefined as a resource!”

What a wonderful aspiration to take something that used to be thrown in the waste bin and instead turn it into a cousin of diamond with even more exceptional properties- graphitic nanomaterials!”

A major challenge facing the recovery of plastics is that they often have to be downcycled; this new work promising a route to upcycling waste materials into value-added, advanced electronics. This is the dream of the circular economy, and the research proposed should help get us there.

Carbon-based nanomaterials are used in a variety of applications across the globe, but they are often sourced from fossil fuels. It is exciting to think that they may one day be sourced from waste plastics, giving that renewed life as advanced materials.”

The £270,000 grant will be provided by the Welsh Government’s Circular Economy Fund.

“Since the Industrial Revolution, Wales has often been the nursery to innovative and world-changing technologies - and we want to ensure that strong record continues as we look towards combating the impact of the climate emergency and continue the country on its path towards a circular economy.

New technologies such as these will help us to reduce waste and keep resources in use for as long as possible. This is a key part of the action needed on climate change and also brings considerable economic opportunities as a part of the transition to a low carbon economy.”