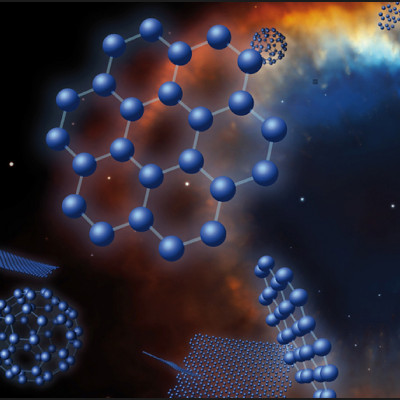 New research by scientists from Delft University of Technology and the University of Duisburg-Essen uses the motion of atomically thin graphene to identify noble gases. These gases are chemically passive and do not react with other materials, which makes it challenging to detect them.

Graphene is an ultimately thin material consisting of only one layer of carbon atoms. Its atomic thickness makes it a perfect filter material for gases and liquids: graphene by itself it is not permeable, but small perforations make it very permeable. Moreover, the material is among the strongest known and withstands high stresses. Together, these two traits provide the perfect basis for new types of gas sensors.

The scientists use microscopic balloons made of bilayer graphene (with a thickness of 0.7 nm), with very small nanopore perforations with diameters down to 25 nm, to detect gases. They use a laser to heat the gas inside the balloon and make it expand. The pressurized gas then escapes through the perforation. “Picture a balloon that deflates when you let the air run out”, says TU Delft researcher Irek Rosłoń, “We measure the time it takes the balloon to deflate. At such a small scale, this happens very quickly – within around 1/100.000th of a second – and interestingly, the length of time depends strongly on the type of gas and the size of the pores. For example helium, a light gas with high molecular velocity, escapes five times faster than krypton, a heavy and slowly moving gas.” The method allows to distinguish gases based on their mass and molecular velocity, which normally requires big mass spectrometers.

The findings are reported in the journal Nature Communications.

The graphene balloons are continuously driven by an optothermal force at high-frequencies of 100 kHz, causing gas to be pumped in and out through the nano-pores very rapidly. The permeation of the gas can be studied by looking at the mechanical motion of the graphene. At low pumping frequencies, the gas has plenty of time to escape and does not affect the motion of the graphene significantly. However, the membrane experiences a large amount of drag at increased pumping frequencies, in particular when the period of pumping corresponds to the typical time it takes for the gas to leave the balloon. “By measuring at various frequencies, we can find that peak in the drag. The frequency at which a peak is observed corresponds to the permeation speed of the gas.”

The researchers extended this idea to study gas flow through nano-channels. Connecting the balloon to a long channel makes it much harder for the gas to escape. The increase in the deflation time gives experimental insight into the gas flow mechanics within the nano-channels. Altogether, this work shows how the extraordinary properties of graphene can be used to study gas dynamics at the nanoscale, as well as to engineer new types of sensors and devices. In the future, this can enable small, low-cost and versatile sensor devices to determine the composition of gas mixtures in industrial applications or for air quality monitoring.