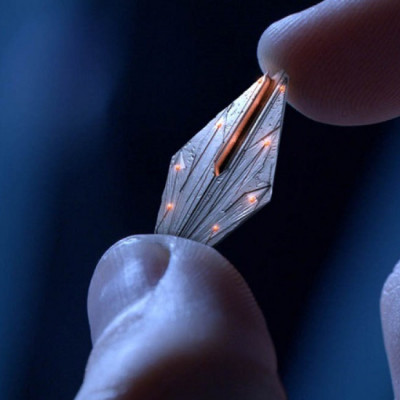 Collaborating researchers from the University of Copenhagen’s Niels Bohr Institute and the University of Bochum (Germany) have developed a chip with scale-up potential that they say will serve as a core component of a quantum simulator. The researchers demonstrated an ability to produce a large enough number of stable photons, encoded with information, to scale up their nanochip device.

The technological advance, the researchers said, charts a direct course for achieving a discernible “quantum advantage,” in which a quantum device successfully solves a computational task with drastically improved speed and efficiency as compared to a supercomputer. The research was published in Science Advances.

The researchers constructed their chip, which is less than one-tenth the thickness of a human hair, to pair with existing quantum technology. In addition to harboring quantum information-containing photons, the nanochip itself can produce hundreds of the particles. Achieving a quantum advantage necessitates the control of approximately 50 qubits. Photons, electrons, and atoms have each demonstrated the ability to function as these so-called quantum building blocks in various systems.

“It could cost us €10 million to perform an actual experiment that simultaneously controls 50 photons, as Google did it with superconducting qubits,” said Ravitej Uppu, lead author of the team’s published results. “We simply can’t afford that. However, what we as scientific researchers can do is to develop a photon source and prove that it can be used to achieve ‘quantum advantage.’ We have developed the fundamental building block.”

Using photon sources, the researchers reported, the team aims to now develop new and advanced quantum simulator devices. These simulators will, if effective, resolve complex biochemical problems — of potential value in developing medications. They will additionally work to establish a European consortium of partners from industry and academia with a focus on building quantum simulators, said Peter Lodahl, director of the Center for Hybrid Quantum Networks (Hy-Q).

An advantage to photon reliance is that the potential for scaling up exists, due to the availability of advanced photonic chips. These have been developed most commonly for applications in telecommunications.

A challenge that the researchers said they have overcome is consistently generating photons of a sufficiently high quality for quantum applications.

“Denmark and Europe have proud traditions in quantum optics research, and at the same time, a strong telecom industry and infrastructure,” Lodahl said. “It would be really exciting to combine these strengths in a large-scale initiative dedicated to photonic quantum computers. It would be fantastic to be part of a process that extends all the way from fundamental quantum physics to new technological applications.”