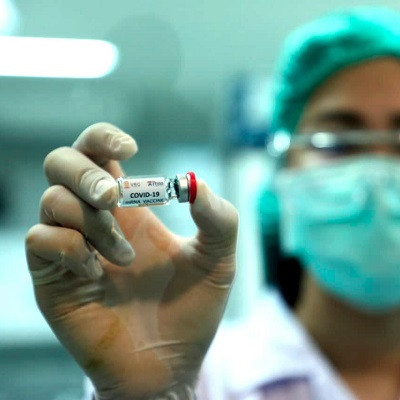 Kiat Ruxrungtham isn’t content to see Thailand wait in line to buy vaccines from another country. He’s on a mission to build up Thailand’s own vaccine production capabilities, to supply not only his country but 6 nearby nations with immunizations against Covid-19. His long-term goal is even more ambitious: to lay the groundwork for rapid vaccine development against the next pandemic, whenever it may strike.

“When you face another pandemic, instead of sitting and waiting to buy it, you have to stand up and make your own vaccine,” said Ruxrungtham, who is head researcher at Chulalongkorn University’s Center of Excellence in Vaccine Research and Development, in Bangkok. He pointed to the lesson of the 2009 H1N1 flu pandemic, when wealthy countries produced a vaccine relatively quickly using well-established technology.

“China, the US, Europe, Japan - every country got a vaccine within a few months,” he pointed out, in a recent Asia Society Hong Kong conversation.  “Thailand got it when the pandemic was already almost gone.”

The solution, he said, is to invest in Thailand’s own vaccine development program. By establishing funding and production pipelines now, he said, the country will be well-positioned to quickly produce a vaccine the next time a pandemic erupts.

To produce a coronavirus vaccine, they are using the mRNA platform that has proven safe and effective in trials from Moderna and Pfizer/BioNTech. On this, they are getting an assist from Drew Weissman, one of the pioneers of the mRNA technology.

Ruxrungtham and Weissman first met 25 years ago, as research fellows at the National Institutes of Health (NIH) in Bethesda, Maryland. Weissman has been collaborating with the team at Chula VRC for several years. With the Covid-19 pandemic, the project took on a new urgency.

“[Kiat] worried that any vaccine developed in the West wouldn’t be available in Thailand and surrounding low-income countries for years,” Weissman said. When Ruxrungtham told him the plan to produce the vaccine for distribution to countries that wouldn’t be able to buy one themselves, he said, “that sounded like a beautiful goal.”

Animal testing began in March, and the vaccine produced very strong immune responses in mice and monkeys. Human trials, originally planned for this fall, have been pushed back to early 2021 due to delays in securing funding. “We learned that seeking money from the government alone is going to take time,” he said. “It can be several months to get approval.” The institute began reaching out to private donors as well, and found additional support for the project.

Human trials for safety can be conducted in Thailand, but because the incidence of Covid-19 is low in the country, trials to test the vaccine’s efficacy would have to be conducted elsewhere. Because the Chula VRC vaccine uses the same mRNA platform as the Pfizer vaccine, the Thai Department of Disease Control (DDC) may agree to base their approval on Pfizer’s efficacy trial data, rather than require Chula VRC to conduct their own phase III trials.

Producing the mRNA vaccine requires two components, the mRNA sequence itself plus a fatty coating called a lipid nanoparticle, to deliver the mRNA to cells. Partnering with a manufacturer in Canada to make the lipid nanoparticle, Chula VRC obtained a license to use their formulation.

“We convinced our biotech partner in Canada to license the encapsulation technology to us because we said, we are not coming for commercial purposes,” said Ruxrungtham. “We want it for security purposes, for Thailand and low-income countries in Asia.” They successfully licensed the formulation for use in Thailand, Myanmar, Cambodia, Laos, Indonesia, Malaysia, and Pakistan. The next step will be finding funding to distribute the vaccine to as many people in those countries as possible.

“This is the global challenge, concerning access to a vaccine,” he said. “It’s an equity issue.”