This May Be the First Complete Observation of a Nanoflare 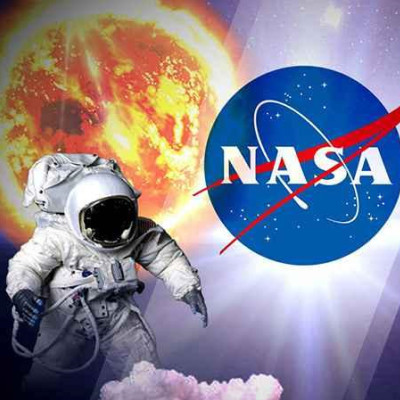 Researchers may have found the long-sought “nanoflares” thought to heat the solar corona to its incredible temperatures.

A new study published in Nature Astronomy marks the first time researchers have captured the full lifecycle of a putative nanoflare – from bright origins to blistering demise.

Mini flares for a major puzzle

Nanoflares are tiny eruptions on the Sun, one-billionth the size of normal solar flares. Eugene Parker – of Parker Solar Probe fame – first predicted them in 1972 to solve a major puzzle: the coronal heating problem.

That's the mystery of how the Sun’s outer atmosphere, or corona, gets so incredibly hot. Despite being much farther away from the solar core, it's millions of degrees hotter than the layers beneath it.

Nearly 50 years later the coronal heating problem still hasn’t been solved.  It has been hard to confirm any of a handful of different theories, in part because no one has ever actually seen a nanoflare.

“They’re extremely difficult to observe,” said Shah Bahauddin, Research Faculty at the Laboratory of Atmospheric and Space Physics at the University of Colorado, Boulder, and lead author of the study.

Tiny and brief, our best telescopes have only recently become powerful enough to resolve them. And seeing a tiny flash isn't enough – it takes a lot be considered a true nanoflare sighting. “We know from theory what we should look for – what fingerprint a nanoflare would leave,” Bahauddin said.

A nanoflare by any other name

To say you’ve observed a corona-heating nanoflare, you have to check at least two major boxes. 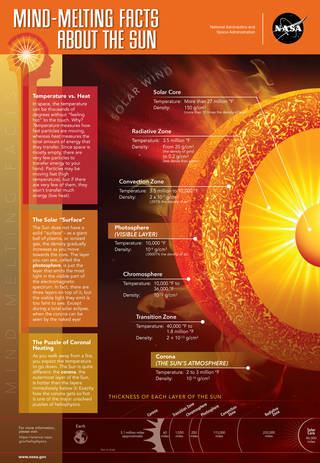 The coronal heating problem is one of several mind-melting facts about the Sun.

First, like regular flares, a nanoflare is set alight by magnetic reconnection. If the eruption you’re seeing is heated by some other process, it’s not a nanoflare.

Magnetic reconnection is triggered when magnetic field lines explosively realign. Unlike other mechanisms that heat things up gradually, it can take relatively cool plasma and make it super-hot in an instant.

One way to spot heating via magnetic reconnection is to observe intense heat amidst far cooler surroundings.

Second, the nanoflare has to heat the corona, which might lie thousands of miles above where they erupt. That’s not trivial – many other solar eruptions only heat their immediate surroundings.

“You have to examine if the energy from a nanoflare can be dissipated in the corona,” Bahauddin said. “If the energy goes somewhere else, that doesn’t solve the coronal heating problem.”

When Bahauddin started this research as a PhD student, he wasn’t thinking about nanoflares at all. Looking for a project, he decided to investigate some tiny bright loops – at about 60 miles across, they are tiny on Sun scales – that he’d noticed flickering in the layer just below the super-hot corona. 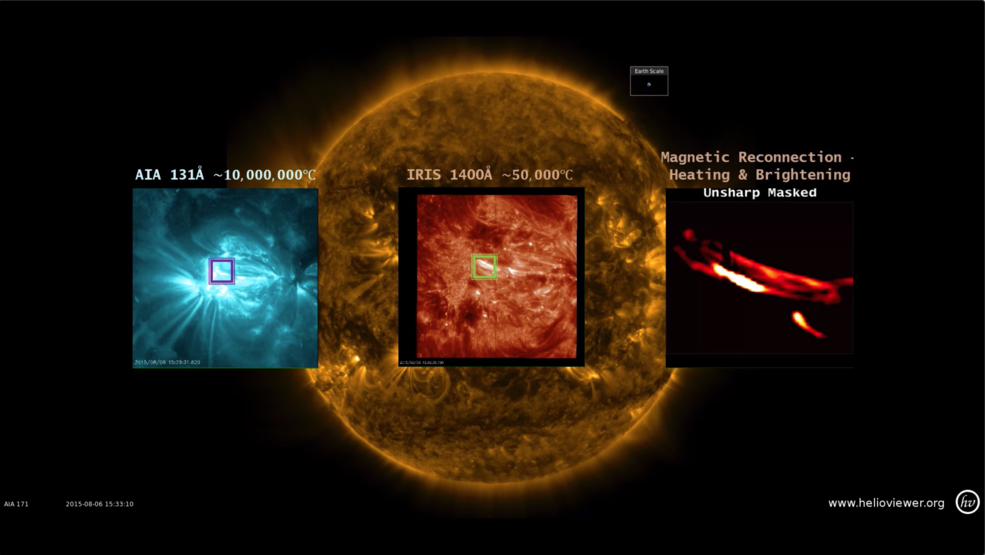 A close-up of one of the loop brightenings studied in the article. Each inset frame zooms in to the selected region in the frame to its left. The frame on the far right is the most zoomed in, showing the putative nanoflare.

“I thought maybe the loops made the surrounding atmosphere a bit hotter,” he said. “I never thought that it would make so much energy that it might actually propel hot plasma to the corona and heat it up.”

But as Bahauddin zoomed in on images taken by NASA’s Interface Region Imaging Spectrograph, or IRIS satellite, he uncovered two surprises.

First, these loops were incredibly hot – millions of degrees hotter than their surroundings. But even stranger, this heat was distributed in an unusual way – differently than in most other physical systems.

While the Sun is made mostly of hydrogen and helium, it also contains smaller amounts of every other element. In these loops, somehow the heavier elements – such as silicon, which has 14 protons in its nucleus – were much hotter and more energetic than lighter elements, such as oxygen, which has only eight.

“If you push a ball that is very light across the floor, it should roll farther than a heavy ball,” said Bahauddin. “Yet, in our case, the heavier elements were shooting out at about 60 miles per second, while the lighter ones were almost at zero. That was completely counterintuitive.”

This strange observation told them that something very specific must be happening in these bright loops.

“That was a big clue,” said Amy Winebarger, solar physicist at NASA’s Marshall Space Flight Center in Huntsville, Alabama, and coauthor of the study. “You really had to start thinking about what kind of heating could impact the oxygen atom differently than the silicon atom.”

Bahauddin spent the following years running computer simulations, testing out different heating mechanisms. He needed to find one that could match their observations, including heating the heavier elements more than the lighter ones.

In the end, only one heating mechanism could produce the effect. The heat had to come from a magnetic reconnection event – the same driving force behind solar flares.

The key was in the aftermath. As magnetic field lines twist and re-align, they create a brief electric current that accelerates the newly-freed ions. Bahauddin likens it to a panicked crowd.

“It's like everyone in a room is trying to run at the same time. They start to collide with each other, and there’s a big mess,” Bahauddin said.

Critically, the longer an ion can keep moving in an electric field, the more energy it gains. This is where heavier ions, like silicon, have an advantage. “Since they have more momentum, they can plow through the crowd and steal all the available energy,” Bahauddin said.

In other words, the more massive silicon ions bulldozed their way through the chaos, soaking up the energy from the electric field. The lighter oxygen ions couldn’t do that – they were stopped dead in their tracks after each collision.

This mechanism could explain their results, but still, it was a longshot. The simulations showed that this process only happened under quite specific conditions.

“To make this happen you needed a specific temperature, and you needed the right proportion of silicon to oxygen,” Bahauddin said. “So we looked back at the measurements, and saw that the numbers exactly matched.” Remarkably, the conditions on the Sun mirrored his simulations.

So far, these bright loops appeared to be tiny flares – but did their heat actually reach the corona?

Bahauddin looked to NASA’s Solar Dynamics Observatory, which carries telescopes tuned to see the extremely hot plasma only found in the corona. Bahauddin located the regions right above the brightenings shortly after they appeared.

Bahauddin documented 10 instances of bright loops with similar effects on the corona. Still, he hesitates to call them nanoflares. “Nobody actually knows because nobody has seen it before,” Bahauddin said. “It’s an educated guess, let’s say.”

From the perspective of the theory that says nanoflares heat the corona, the only thing left to do is to show that these brightenings occur often enough, all over the Sun, to account for the corona’s extreme heat. That’s still work in progress. But observing these tiny bursts as they heat solar atmosphere is a compelling start.

“We have shown how a cool, low-lying structure can actually supply super-hot plasma to the corona,” Bahauddin said. “That, to me, was the most beautiful thing.”