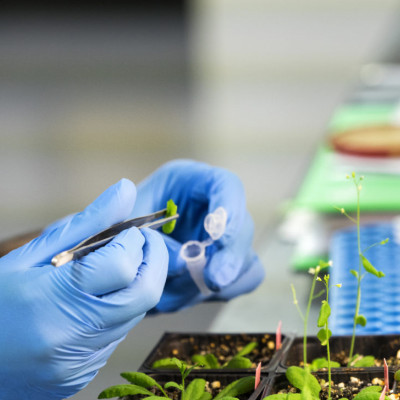 The COVID-19 pandemic has significantly disrupted food supply chains, intensifying the need for biotechnological solutions for achieving food security. Crops and vegetables are a significant source for food, materials, and medicine. Thus, there is great incentive to genetically engineer crops that possess desirable traits like greater biomass production and resistance to pathogens while requiring less resources including space and labor.

In order to generate genetically engineered plants, oligonucleotides encoding the gene of interest must be delivered into the intracellular spaces or target organelles like nuclei and chloroplasts of plant cells efficiently with minimal biological perturbations. Yet, technological process in this area has been limited. 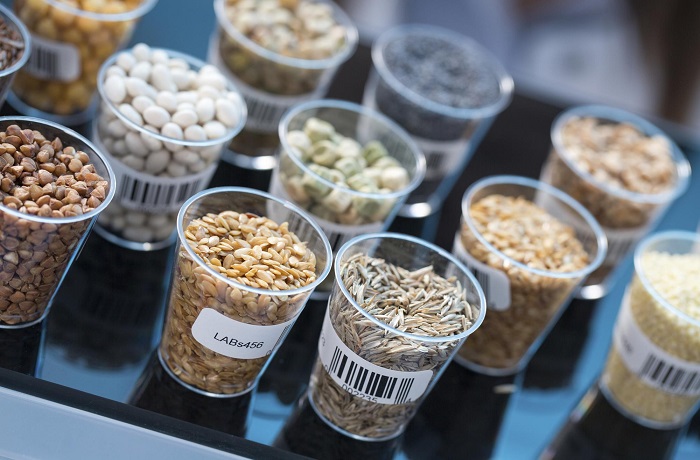 There is great incentive to genetically engineer crops that possess desirable traits like greater biomass production and resistance to pathogens while requiring less resources, including space and labor.

One of the most commonly used tools for gene delivery in plants is Agrobacterium, a Gram-negative bacterium, that can transfect both plant protoplasts (cells without cell walls) and tissues (such as leaves). However, this method is unsuitable for stable, long-term integration of DNA cargo and it requires repeated and tedious plant transformation each time transient gene expression ends. Agrobacterium also randomly integrate with DNA, which may disrupt endogenous gene expressions and limit uniform control over target gene expression. Notably, Agrobacterium has also been reported to cause plant tissue necrosis.

The other popular technique is biolistic particle delivery or gene gun. This method utilizes high energy to deliver biomolecule-coated gold particles directly into plant cells through physical disruption of the plant cell wall and membrane. However, particle-bombarded sites can be severely injured from high pressures and can then no longer be cultured. In addition, the throughput of this technique is extremely low. 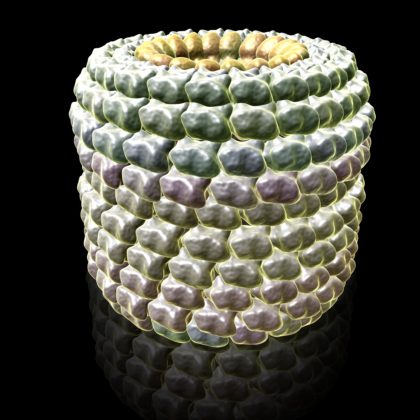 Viral vectors, such as tobacco mosaic virus-based Geneware technology and cowpea mosaic virus, are useful for oligonucleotide delivery. Nevertheless, viral vectors have a limited expression cassette size and may not be able to deliver large and complex cargo that are more valuable for plant biotechnology. Furthermore, viral vectors are unable to deliver proteins directly, which make them incompatible with popular gene editing techniques like CRISPR, which typically make use of Cas protein. Finally, viral vectors manufacturing is subject to strict regulations due to their pathogenic origins and capabilities to integrate a portion of their genetic elements into the plant host genome.

In recent years, a number of nanotechnological tools have been developed to overcome the limitations of traditional techniques for plant genetic engineering. One such emerging technique is the use of magnetic iron-oxide nanoparticles conjugated with DNA. This method has been extensively used for mammalian cell transfection but it is challenging to adapt it for plant engineering due to the presence of the plant cell wall which, unlike the cell membrane, does not undergo endocytosis.

Haixin Cui, professor, and his team from the Chinese Academy of Agricultural Sciences, first showed that the apertures of cotton pollens have no cell wall and then made use of magnetic nanoparticles as carriers to deliver genes through these cell-wall-free apertures. Magnetic fields were also applied to provide directional forces to transport the nanoparticle gene carriers into pollens. They found that their magnetofection method provided >80% viability in pollens and was minimally perturbative.

Making use of confocal fluorescence imaging and energy-dispersive spectroscopy, the team also confirmed that fluorescently-labeled nanoparticle gene carriers were delivered into pollens. Finally, using PCR, the team showed that they were able to integrate the BTΔα-CPTI gene into the genome of transgenic cotton plant to confer resistance on insects, with stable inheritance in offspring. The team also reported that their magnetofection method works for other plant species including pumpkin and lily.

Despite the promising results from Cui and team, it may be still too early to conclude that magnetofection is effective for gene delivery in different plant species. In a recent paper, a team led by John Fowler, PhD, professor at Oregon State University, screened more than 50,000 pollen grains and reported that magnetofection using magnetic nanoparticles does not work as well as for monocot plant species such as lily as claimed by Cui and colleagues. The authors also argued that the ~90% transfection efficiency in lily pollen reported by Cui and team was likely due to an erroneous use of the biomarker, β-glucuronidase, to demonstrate transfection success as there is significant endogenous β-glucuronidase activity.

“Pollen is an attractive biological target to transfect because pollen grains carry the male gametes, and so could generate a complete genetically modified plant after fertilization in the plant ovules. Jenny Mortimer at the Lawrence Berkeley National Laboratory and I were excited about the paper from Zhao et al. because it presented a potentially useful and convenient way to create transgenic plants. If the magnetofection method works, it would allow us to avoid using time-consuming tissue culture based on regenerable tissues. Regeneration is feasible but technically very challenging for both sorghum and maize, monocot species that are the foci of our research programs,” says Fowler.

“The paper from Zhao et al. primarily focused on dicot species like cotton and pumpkin, but they also provided data suggesting that their method could work for lily, a monocot species. In our paper, we tested magnetofection on pollen from maize, sorghum, and lily, and found that we never observed the transient expression of a genetic reporter that would indicate successful transfection. Although we were disappointed by the findings, our work indicates that magnetofection is likely not a simple, universal pollen transfection method.”

Besides the use of magnetic nanoparticles, carbon nanotubes are also an increasingly popular nano-tool for plant transfection. Markita Landry, PhD, professor, and her team at the University of California, Berkeley, reported the use of carbon nanotubes that rely on passive delivery as a plant transformation tool. As a proof-of-concept, her team physically adsorbed and electrostatically grafted DNA encoding for green fluorescent protein (GFP) onto single-walled carbon nanotubes, and showed that their technique can effectively deliver DNA into the leaves of a variety of plant species including wheat, cotton, and arugula for transient gene expressions.

The nanotubes were also found to protect DNA from degradation by endogenous nucleases. Landry and her team also demonstrated that their carbon nanotube technology did not result in significant toxicity in mature leaves by performing quantitative PCR analysis of NbrbohB, a known stress gene in tobacco plants, and relative to the housekeeping gene Elongation Factor 1 (EF1).

To further demonstrate the utility of their method, the team also tested their nanotube technology on protoplasts which are extensively used in biotechnology for high through plant genetic screens and synthesis of recombinant proteins. Protoplasts isolated from arugula leaves were able to internalize carbon nanotubes and stably expressed the GFP plasmid with 80%.

siRNA is a useful material for transient plant genetic engineering. Using single-walled carbon nanotubes, Landry and her team successfully showed the transfection of siRNA to inhibit and silence expressions of GFP in the leaves of tobacco plant for up to a week. The carbon nanotubes also protected the siRNA from degradation and were biocompatible for use in plants.

“The impact of using nanoparticles for plant genetic engineering is that delivery of DNA and RNA can be accomplished without pathogens such as Agrobacterium or without the use of biolistic force that disrupts the plant tissue. Another advantage is that nanoparticle delivery of siRNA can be a green alternative to the use of chemical pesticides, or the delivery of mRNA for DNA-free genetic manipulation of plants. Overall, nanoparticles could increase the throughput, precision, and ease of plant genetic engineering,” says Landry.

Nanotechnology has significantly enhanced genetic reprogramming of mammalian cells and it is a promising tool for plant engineering too. Nevertheless, to move this field forward, several important questions have to be addressed.

First, unlike mammalian cells, plant cells have rigid cell walls which exclude particles larger than approximately 5–20 nm, and there is insufficient peer-reviewed evidence to support that nanoparticles are able to diffuse through the multi-layered cell wall and then cell membrane easily. Systematic characterization on how nanoparticle properties affect their interactions with plant cells and tissues is crucial for mechanistic understanding.

For instance, the team led by Michael Strano, PhD, professor at the Massachusetts Institute of Technology, found that the transport of single-walled carbon nanotubes across pollen cell membrane is mainly controlled by their surface zeta potential. Complex biological differences among plant species and the types of biological materials from plants (protoplasts, leaves, pollens, and regenerable tissues like root hairs) also mean that systematic characterization of plant-nanoparticle interactions are needed to enhance transfection outcomes.

Second, the size of the DNA cargo that can be delivered into plant cells is directly correlated to the surface area of the nanoparticles. Thus far, only small (<20 nm) spherical nanoparticles and single-walled cylindrical carbon nanotubes (0.8–1.2 nm in diameter and 500–1000 nm in length) had shown utility to transfect plant cells through passive diffusion and/or with the use of mechanical aid such as a gene gun. Unfortunately, this means that only small gene cargo load (~4 kbp) with zero to limited physiological, economic and agricultural value can be delivered. In order to be a useful tool for industrial-scale plant biotechnology, it is useful to improve the complexity of cargo that can be delivered with nanoparticles.

Third, it has been shown that nanoparticles like carbon nanotubes can adversely inhibit the root elongation of important crops like tomato and lettuce but there is still insufficient cytotoxicity characterization in literature when new plant transfection methods are reported. More work is warranted to ensure that plants continue to grow healthily after nanoparticle transfection so that the engineered plants can be used as resources.

Finally, most of the nanotechnology technique for plant transfection offers transient gene expression. While this is useful for biological studies, it may not be as impactful for crop engineering where long-term gene expressions are needed to provided stable phenotypes.