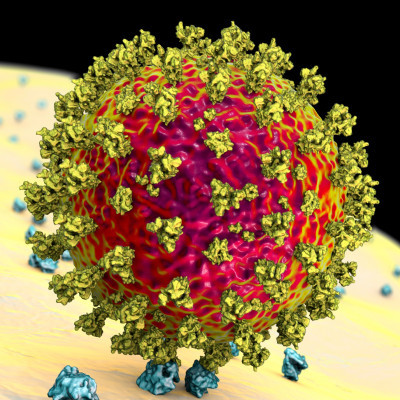 Stable enough to be used in inhalers or nasal sprays, the nanobodies offer a new option, aside from injected vaccines, for COVID-19 prevention and treatment.

Even as COVID-19 vaccines are rolled out worldwide, it’s vital that we maintain efforts aimed at preventing transmission of the virus and continue searching for new COVID-19 vaccines and treatments. The more options we have at our disposal, the better prepared we will be for dealing with the unknowns surrounding this novel coronavirus, such as whether vaccinated individuals can still be infectious.

In the work reported here, researchers from the University of California San Francisco (UCSF) approached the problem through the production of simplified antibodies (“nanobodies”) engineered to be highly effective at blocking SARS-CoV-2, the virus that causes COVID-19. Because nanobodies are extremely stable, they can be aerosolized, stored at room temperature, and self-administered as needed, directly to affected nasal or lung tissues using nasal sprays or inhalers. 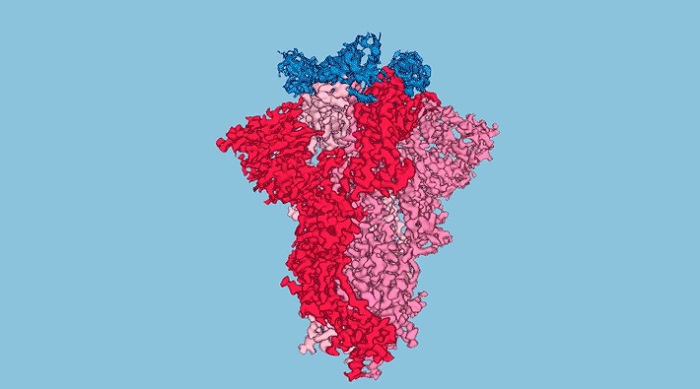 Three nanobodies (blue) are shown bound to the tip of the SARS-CoV-2 spike protein (red/pink). The nanobodies were engineered to be extremely effective at blocking the virus from entering a host cell.

Natural nanobodies were discovered about 30 years ago in the immune systems of camelids (e.g., camels, llamas, and alpacas). Although functionally analogous to antibodies, nanobodies are about ten times smaller, much more robust, and simpler to reproduce. As a result, they are often used in biomedical research and pharmaceutical development.

At UCSF, the researchers sifted through over two billion synthetic nanobody sequences available in databases and identified a few most likely to bind to and neutralize the SARS-CoV-2 spike protein—the distinctive protrusions on the coronavirus surface that facilitate entry to a host cell. Three nanobodies in particular (Nb3, Nb6, and Nb11) were selected for further characterization and study.

(a) Crystallography data from the ALS show atomic-level details of key Nb6 regions. (b) X-ray footprinting experiments performed at the ALS revealed a cluster of residues in the spike’s N-terminal domain, where it likely interacts with Nb3.

To better understand how the nanobodies interact with the spike protein in different conformations, the researchers obtained structural maps of nanobody–spike complexes using cryo-electron microscopy (cryo-EM) at UCSF. In addition, protein crystallography at ALS Beamline 8.3.1 yielded atomic-level close-ups of nanobody regions that directly interact with the spike. In cases where cryo-EM provided inconclusive data, the researchers relied on a relatively new technique called x-ray footprinting at ALS Beamline 3.2.1. This technique provides structural information similar to crystallography, but is done with molecules in solution and doesn’t require protein crystals.

All combined, the structural work gave the researchers enough information to optimize the potency of the nanobodies, Nb6 in particular, through strategies such as the linking of two or three nanobodies together (creating “bivalent” and “trivalent” versions that attach to the spike at multiple points) and the targeted replacement of amino acids—mutations that preliminary screens indicated would increase nanobody affinity for the spike.

In an aerosol formulation, dubbed “AeroNabs” by the researchers, these nanobodies could be self-administered with a nasal spray or inhaler. Used once a day, AeroNabs could provide powerful, reliable protection against SARS-CoV-2.

The results were dramatic: the mutated version of Nb6 (mNb6) was 500 times more potent than the original version, and trivalent Nb6 (Nb6-tri) was 200,000 times more potent than monovalent Nb6. Combining these two strategies yielded a version (mNb6-tri) capable of neutralizing SARS-CoV-2 at exceedingly low (picomolar) concentrations. In preventing the spike from binding to host receptor cells, mNb6-tri both occludes the spike binding site and locks the spike into an inactive conformation.

The researchers are currently moving forward to the animal testing phase for these synthetic nanobodies, as their combined stability, potency, and multiple modes of action provide a distinctive potential prophylactic and therapeutic approach to limiting the continued toll of the COVID-19 pandemic.