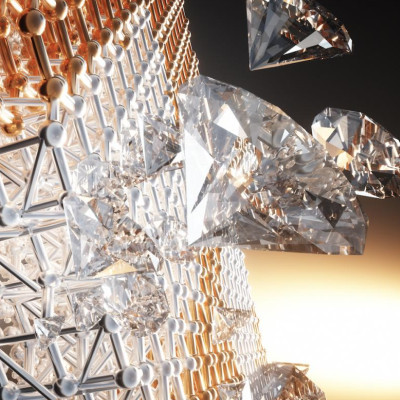 The possibilities embodied in different polytypes of h-BN include the ultra-hard diamond phase, a cubic structure (c-BN) with strength and hardness second only to actual carbon diamonds. Key to fabricating such materials is the ability to induce and control the transformation between their various crystalline phases, in a way that is efficient and cost effective enough to allow for economies of scale.

While synthesizing such materials in their “bulk” or 3D configurations requires immense pressure and heat, researchers at the NYU Tandon School of Engineering have discovered that h-BN in layered, molecule-thin 2D sheets can phase transition to c-BN at room temperature.

In a new study, a team led by Elisa Riedo, Professor of Chemical and Biomolecular Engineering at NYU Tandon, and in collaboration with Remi Dingreville at the Center for Nanotechnologies at Sandia National Laboratories, produced experiments and simulations using a nanoscopic tip compressing atomically thin, 2D h-BN layers to reveal how these room-temperature phase transitions occur and how to optimize them, partly by varying the number of layers in the h-BN thin film.

“When BN is in the diamond phase, hardness and stiffness increase dramatically, and is, in fact, nearly as hard as a traditional carbon diamond with an improved thermal and chemical stability,” said Riedo, “But it cannot normally be found in nature. Formation of cubic boron nitride must be performed in a lab. So we set out to explore the physics and understanding of phase transition from hexagonal to cubic boron nitride in the special case of films that are atomically thin.”

Lavini explained that the work involved application of pressure to atomically thin h-BN films with a number of atomic layers from one to ten, using an atomic force microscope (AFM). To test the extent of the phase transition from hexagonal to cubic crystalline structure, the AFM nanoscopic tip probe simultaneously applies pressure and measures the material elasticity.

“A high degree of stiffness demonstrates the phase transition to diamond crystal structure. This is critical because it was not clear before that phase transition could even occur at room temperature,” he explained. “Because the whole physics of phase transitions is different in a 2D ‘universe’ we are discovering and redefining some fundamental materials rules. In this state, for example, the energy barrier to transforming from hexagonal to cubic phase is much smaller.”

Through simulations — described in the study — the collaborators also discovered heterogeneity in the phase transition: instead of spontaneous change to c-BN occurring evenly under pressure, they found that diamonds formed in clusters, and expanded. They also observed that the larger the number of layers of h-BN, the smaller the number of diamond clusters.

Riedo explained that the benefits of 2D BN diamonds over 2D carbon diamond (also known as diamene) are adaptability and potential economies of fabrication. “Recently we discovered that it is possible to induce diamene formation from graphene, however, specific types of substrates or chemicals are required, while h-BN can form diamonds on any substrate in ambient atmosphere. In general, it is really exciting the discovery of exceptional new properties in pressure-induced diamond phases in 2D materials” she said.

Riedo said the next phase will turn to applied research, with more large-scale experiments on mechanical resistance for specific applications.