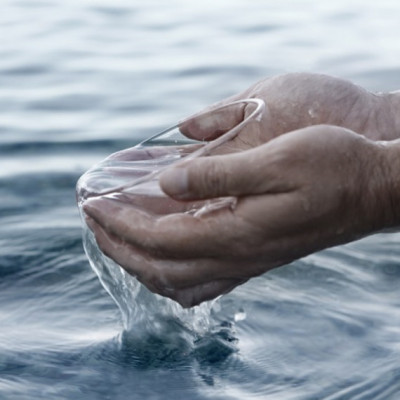 Professor MATSUYAMA Hideto’s research group at Kobe University’s Research Center for Membrane and Film Technology has successfully developed a new desalination membrane. They achieved this by laminating a two-dimensional carbon material on to the surface of a porous polymer membrane.

In this research study, graphene oxide nanosheets, which are a type of two-dimensional nanomaterial, were stacked upon the surface of a porous membrane after being given a chemical reduction treatment, enabling a desalination membrane layer of approximately 50 nanometers (nm) to be developed (a nanometer is 1/20000th of a millimeter).

The developed membrane has the potential to perform highly efficient desalination because it is possible to control the gaps between its nanosheets and the charge on the nanosheets’ surfaces. It is hoped that this research will contribute towards the application and implementation of futuristic desalination membranes. These research results were published in Journal of Materials Chemistry A on November 18, 2020.

The π-π stacking improved the stability of the nanosheet-laminated membrane and made it possible to manipulate the interlayer gap between each nanosheet.

Porphyrin-based planar molecules with charged groups and a conjugated π system were introduced between the nanosheets. This resulted in electrostatic repulsion between the graphene oxide and the planar compound’s negative charge, enabling the researchers to control the anions’ movement within the nanochannels.

The nanosheet-laminated membrane developed through this research was able to reject sodium chloride (NaCl) permeation by 95%. In the future, these research results can contribute towards the creation of new, high performance membrane technologies for desalination.

97.5% of the water on Earth is seawater and only 2.5% is freshwater. Within this percentage, a mere 0.01% of freshwater resources can be easily treated in order to be utilized by humankind. However, the human population continues to increase every year. Consequently, it has been predicted that in several years’ time, two thirds of the world’s population will have insufficient access to freshwater. A worldwide water shortage is one of the gravest issues facing humankind. Therefore, technologies that can obtain the necessary resources by converting the Earth’s abundant seawater into freshwater are paramount.

This research team developed a highly functional desalination membrane by laminating the membrane with a two-dimensional carbon material of the approximate thickness of a carbon atom. These 2D carbon materials were graphene oxide nanosheets that were chemically reduced to give them strengthened π-π interaction.

By applying nanosheet coatings with intercalation of porphyrin-based planar molecules (with charged groups and a conjugated π system) to the surface of a porous membrane, the research group was able to construct an ultrathin desalination membrane layer approximately 50nm thick (Figure 1).

Figure 1: Scanning Electron Microscope image of the nanosheet-laminated membrane developed through this research.

This layer demonstrated high ion-blocking functionality because the size of the nanochannels (the gaps between each nanosheet) could be controlled within 1nm. Furthermore, the gaps between the nanochannels in the nanosheet-laminated membrane demonstrated continuous water-stability due to the strong π-π stacking between the sheets, suggesting the possibility that it could be utilized for a long period of time. In addition, there was no loss of desalination functionality even under a pressure of 20 bar.

The researchers revealed that the transfer of ions inside the developed nanosheet-laminated membrane were effectively suppressed by electrostatic repulsion on the nanosheet surface (Figure 2). This electrostatic repulsion was highly effective when the width of the nanochannels was appropriately controlled. For the nanosheet material used in this study, the width of the nanochannels could be confined by controlling the chemical reduction process and the intercalation ratio of porphyrin-based planar molecules.

NaCl is the main component of seawater ions and it is particularly difficult to prevent it from permeating the membrane. However, a nanosheet-laminated membrane produced under optimal conditions was able to block around 95% of NaCl. 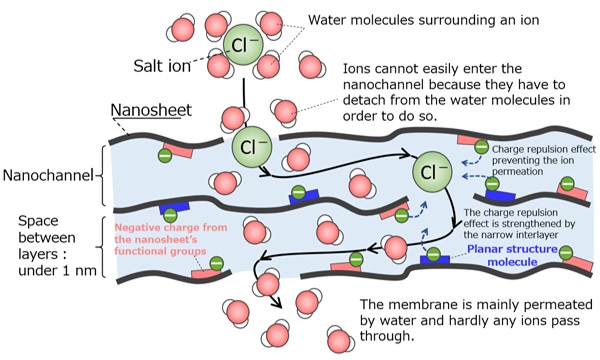 The 2D nanosheet-laminated membrane developed through this research was produced by regulating the reduction of the oxidized graphene sheet and the intercalation ratio of planar molecules, which in turn enabled both the interlayer space between the nanosheets and the electrostatic repulsion effect to be controlled. In addition to desalination membranes, this technique can also be applied to the development of various electrolyte separation membranes.

Low-energy desalination technologies using separation membranes are indispensable for reducing water shortages. It is hoped that the technology will contribute towards resolving the issue of water resources drying up worldwide. Next, the research team will try to further improve the developed membrane’s high functionality, so that it can be implemented.