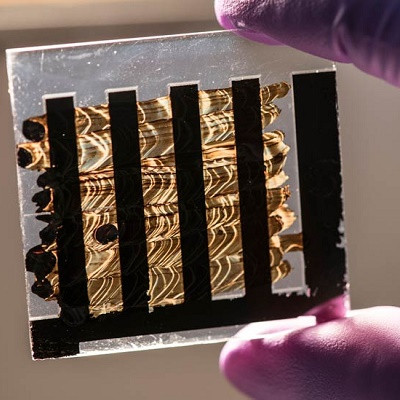 Something must be afoot when a leading US oil and gas stakeholder spends years perfecting the perovskite solar cell of the future.

If the name Hunt Oil rings a bell, it should. As an affiliate of US-based Hunt Consolidated, it is part of a $4 billion oil and gas empire and one of the largest privately held firms in the US. If anyone would be interested in cutting off the renewable energy revolution at the knees, that would be Hunt Consolidated. Nevertheless, Hunt has embarked on a years-long perovskite solar cell venture, and it looks like all that hard work is about to pay off.

Hunt flitted across the CleanTechnica radar last spring when it let word drop that one of its affiliates is Hunt Perovskite Technologies.

That’s great news for renewable energy fans, considering the big dollars that a firm like Hunt could drop on R&D.  The question is whether or not the idea is to gobble up patents for the Next Big Thing in renewable energy, only to lock them away in a closet so as not to compete with fossil energy interests.

That’s a good question. As HPT notes, the firm happens to own 22 US patents on perovskite solar cell technology and more than 45 international patents, making it the largest perovskite PV patent holder in the US.

For the answer, check out the relationship between HPT and the Energy Department’s National Renewable Energy Laboratory. The lab has been cheerleading for perovskite solar cell technology for more than 10 years, and HPT has been a partner in that effort.

The reason for NREL’s perovskite enthusiasm is clear. Perovskite PV  has the potential to drive down the cost of solar power much faster, and far farther, than anything else on the market today. If HPT is super serious about bringing perovskite solar cells to market, the NREL connection would be the proof in the pudding.

HPT also made the case for itself as a leading player in the sparkling green perovskite solar cell market of the future last spring, when it became a founding member of the US Manufacturing Advanced Perovskite Consortium, which is spearheaded by the lab.

In case there are any lingering doubts, when the consortium launched last spring HPT’s chief technology officer Michael Irwin had this to say:

“We have worked in collaboration with NREL for many years, and we look forward to working with US-MAP as well as with other global business partners to realize the potential of perovskite technology for meeting much of the world’s energy needs in the future.”

Did he just say that perovskite solar cell technology will meet much of the world’s energy needs in the future? Yes, he did. No word yet on what parent company Hunt’s oil and gas divisions think about that.

Meanwhile, the new consortium is focused on the metal halide perovskite solar cell area, which happens to be HPT’s field of expertise. In the latest development on that score, last month HPT and the Colorado School of Mines announced a significant step along the R&D trail through a collaborative study with NREL.

If you are a US taxpayer, give yourself a nice group hug for that. The study was funded by the US Department of Energy Solar Energy Technologies Office, award number DE-EE0008540.

For all the juicy details on the study, go to the American Chemical Society’s Energy Letters journal and look up the article, “Improving Photostability of Caesium-Doped Formamidinium Lead Triiodide Perovskite.”

The shorter version is that the research involved a solution to the durability issues that have bedeviled perovskite solar cell technology. Perovskite is a synthetic crystalline material that is relatively inexpensive to grow, but there being no such thing as a free lunch it tends to degrade when exposed to humidity and light. That’s not a deal breaker, but it does mean that researchers have to figure out how to engineer durability into the solar cell.

“HPT and its co-authors identify and analyze the importance of perovskite thin film stoichiometry to its durability and the possible mechanisms that lead to rapid degradation of certain perovskite materials designed for use in the manufacture of photovoltaic (PV) solar cells,” HPT explains. “Their results provide key insights into ways to improve the fundamental durability and stability of perovskite PV modules.”

Interesting! Perovskite solar cell stakeholders have been pursuing a number of different pathways to resolve the durability issue. Protective coatings and sealings are one solution. HPT prefers to tinker with the chemistry of its perovskites for built-in durability.

Circling back around to that bigger question of why one branch of Hunt Consolidated can speak so casually about throwing a monkey wrench into Hunt’s other energy business, it’s possible that Hunt is taking a big-picture, long-term view of the energy landscape and foresees a not too faraway world in which renewables attracts all the up-and-coming talent in the energy field, leaving a workforce desert in the fossil fuel area.

In previous generations few alternatives were available, but today’s crop of scientists and energy researchers can take their pick of career pathways that don’t involve poisoning their own future. As a diversified firm, Hunt has the opportunity to keep attracting top talent in the energy field, even if — and when — other parts of its business wither away.

A look behind the scenes at the Colorado School of Mines demonstrates how the workforce pipeline is pivoting toward renewables. Located in Golden, Colorado, the school is still firmly rooted in its past work in support of the precious metals industry, but its environmental mission has expanded. Having NREL has a neighbor (the lab came to Golden in 1974) probably helped accelerate the trend.

For the new perovskite solar cell research, the School of Mines team deployed a newly acquired instrument called an Environmental X-ray Photoelectron Spectrometer to generate a high intensity light, as in 10 suns of the same power.

The idea was to shrink the time frame of the research project from months and years down to something more manageable.

As described by the School of Mines, the Spectrometer enabled the research team to pinpoint why and how perovskite degrades under light. They found that light triggers a reaction in an impurity called triiodide, which then creates more of itself.

With that knowledge in hand, HPT can take another step up the ladder to a perovskite solar cell with durability engineered into its chemistry.

So, what are the odds Donakowski is headed over to Hunt Oil for employment when he finishes grad school?

Slim to none, according to Donakowski himself. The School of Mines cited Donakowski in a press release detailing its contribution to the NREL-HPT collaboration. He said, “I feel such pride knowing our work can contribute to the future of renewable energy.”

“I’m looking forward to applying the analysis routines to my work at NREL,” he added.

Read the original article on CleanTechnica.