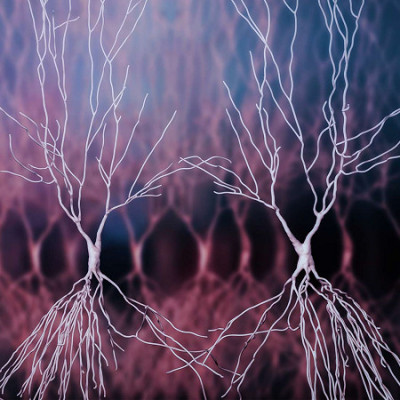 Researchers from Skoltech and their colleagues have demonstrated that nanoengineered biodegradable microcapsules can guide the development of hippocampal neurons in an in vitro experiment. The microcapsules deliver nerve growth factor, a peptide necessary for neuron growth.

Many neurodegenerative conditions that can lead to severe disorders are associated with depleted levels of growth factors in the brain – neuropeptides that help neurons grow, proliferate and survive. Some clinical studies of Alzheimer’s and Parkinson’s diseases have shown that delivering these growth factors to specific degenerating neurons can have a therapeutic effect. However, it is rather hard to do in practice; when taken systemically, as a typical drug, they can have difficulty penetrating the blood-brain barrier and severe side effects. And using viruses to deliver them as a form of gene therapy means one cannot easily stop the treatment once it is initiated, which also leads to safety concerns.

Olga Sindeeva and Gleb Sukhorukov of Skoltech and Queen Mary University of London, together with their colleagues, decided to try to use targeted delivery in the form of microcapsules with an average size of 2 to 3 micrometers bringing one of these neuropeptides, nerve growth factor (NGF), directly to the needed location. To produce the capsules, the team used poly-L-arginine and dextran and the layer-by-layer technique, when very thin films are deposited, as the name suggests, layer by layer to form a capsule. Earlier studies showed that these capsules are biocompatible and can function properly both in tissue slices and in rodents, with no detectable adverse effects.

“Encapsulation via Layer-by-Layer (LbL) technology has an advantage, first of all, in its versatility, meaning the possibility to tailor different functions to the shell of the capsules and incorporate various cargo. Also, unlike many other encapsulation methods, LbL encapsulation is processed in aqueous conditions, which is absolutely compatible with such fragile molecules as some peptides, proteins and in particular growth factors,” Sukhorukov said.

For their new experiment, researchers used cultures of rat hippocampal neurons, which were studied after adding the microcapsules. It turned out that NGF that was delivered in them boosted neuronal growth quite significantly, and this new growth was not arbitrary but rather directed towards the clusters of microcapsules. NGF also enhanced neurite branching, a process that leads to the formation of axons and dendrites, the main functional elements of a neuron. Finally, neurons treated with NGF in microcapsules were able to form functional synapses. If this approach works in clinical applications, it may mean a reversal of neurodegeneration observed in many diseases.

“The properties of LbL microcapsules can be tuned according to the application. So, biocompatibility, degradation and controlled release are defined by the choice of polymers used in capsule shell composition. Controlled release could also be achieved by external stimuli such as ultrasound, laser, or a magnetic field,” Gleb Sukhorukov noted.

The team plans to test their technology of controlled release of NGF for a speedy recovery after neural injury. Earlier studies also showed that a similar approach can work with other growth factors such as basic fibroblast growth factor, a protein involved in a host of biological processes including embryonic development and tissue repair.

The paper describing this work was published in the journal Pharmaceutics. Other organizations involved in this research include University College London and Saratov State University.