$15 Million in Funding, Nanotechnology, and other Lessons from Baratunde Cola 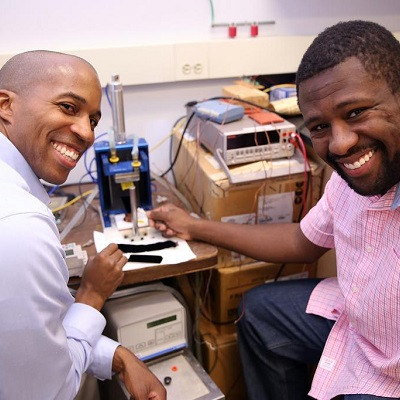 I have to admit I’ve heard of nanotechnology but couldn’t define it if asked. In short, it’s the ability to manipulate and build things on the scale of atoms and molecules—when you do this, interesting new physics can appear. If you’re wondering how small a nanometer is, there are 25.4 million nanometers in one inch. If you’re wondering how nanotechnology applies to you, scientists are using it to make materials and devices lighter, stronger, more reactive, more durable, and of course smaller.

One of those scientists is Baratunde Cola, Ph.D. As founder and CEO of Carbice Corporation, there isn’t much his ingenuity won’t impact, including the phone you are likely reading this story on. I had a chance to get his thoughts on nanotechnology, time management, rethinking diversity, how GeorgiaTech supports entrepreneurs, and how a common thread in his professional and personal life, has been heat. Yes, heat.

Chaka Booker: What does Carbice do?

Baratunde Cola: Every electronic device produces heat as a byproduct and that makes them more expensive, not last as long, and less functional. There aren't many good heat conducting materials in the world. It's hard to have something that gets the heat out and is cost effective during manufacturing. We solve that problem. With nanotechnology we help electronic device packagers make things that perform really well. From satellite radio to coffee makers to cloud computing. We give people the highest capability to dissipate heat and manage thermals at the lowest product costs.

Booker: How is nanotechnology shaping the future?

Cola: Like the silicon chip, without which we wouldn’t have the internet or CPUs—nanotechnology is the next evolution. It's the ability to put atoms where we want them. Before you took atoms where they were, and you used them. Now we can design them from the bottom up and create new physics. What that means, practically, is that nanotechnology will do for this century what silicon architecture did for the last century, which is huge.

Booker: How should entrepreneurs think about that future?

Booker: Your company recently closed a $15 million series A funding round. What did you learn from that process that would help other entrepreneurs?

Cola: In a nutshell, trust yourself and stay authentic. Despite adversity, despite things making you feel you need to change. When fundraising, find people that appreciate you for who you are. Investors will invest in whatever they want. You can either conform to what other people tell you or you can focus on finding people that like what you like. That can be harder because sometimes they're hidden. Especially in materials because they take a long time, and the sales process can be difficult and long. So, I had to find people that really like investing in the same thing I’m interested in.

Cola: You have to talk to people you think are the right fit—and then you're going to be wrong. Those lessons take you to the next person. And the next. And you're probably still not a fit there. Every time, it's listening to what they understood, misunderstood, and adjusting for the next conversation.

Booker: What have been sources of support along the way?

Booker: What’s been most helpful about this community?

Cola: There is so much in terms of human resources, connections to information, access to non-dilutive funding in collaboration with GeorgiaTech, which allowed us to get EPA certification. Our business is to help our customers solve their hard thermal challenges and realize their product goals. That is where we want to spend our primary resources. The Centers of Innovation allowed us to stay focused and meet a critical business need.

Booker: You are a CEO, professor, faculty athletics representative, father, board member. What tips do you have for managing time?

Cola: This might not be something people want to hear—but you have to start practicing doing a lot of things early in your life. By now I'm pretty good at compartmentalizing my focus and spending a hard 30 minutes doing something, taking a break and spending a hard 30 minutes doing something else. But there’s also the reality that my wife's upset with me as we speak because I came home late and the kids are late for an appointment now. Time management will never be perfect and that is okay.

Booker: Two other facets have influenced you. You're a Black man and a former athlete. How have those elements shaped you as a scientist and as an entrepreneur?

Cola: I grew up in Pensacola with a father from the Bronx and I’ve seen and experienced a lot of stuff. As an entrepreneur, there's not much that can rattle me. That comes from what I've experienced through sports and some hard times. I'm very grateful for everything. People can say things to me in an investor pitch that would make someone else cry. But I'm just going to take notes the whole time and come back better. The other thing is creativity. People don't think about athletes that way, but to be a top performer, you learn how to deal with a broken play and still drive a great outcome. Those aspects of my life are competitive advantages. I'm very appreciative of my personal story and background because it’s given me exactly what I need to be successful as an entrepreneur.

Booker: Along the way, you’ve built a very diverse company. How did you accomplish that?

Cola: I don't really focus on building a diverse team. I think about it differently. You have to unpack the root cause of things. I'm a scientist, so I try to get down to the singular thing that drives the issue. The challenge in America is not diversity. The challenge is the legacy of Black slavery and the lasting economic impacts. Diversity and a lot of issues derive from that. To solve problems, you have to isolate it down to that. The problem of diversity in corporate America is the problem of exclusion of excellence. So, I focus on building the most excellent team from the things and people I have access to. Since, from my personal experiences, I don't have an exclusionary network or mindset, what comes to me is organic. My CTO comes to me organically and he happens to be African American. A gut check for anyone that wants to build a diverse organization is to ask themselves what about them is creating an exclusionary environment? Who's in your circle? How can you expand yourself? How curious are you about other people and cultures? You want your circle so wide that you're able to tap the excellence out of everything.

Booker: How do you get to that point?

Cola: It requires an open mind. What type of books do you read? Who do you take advice from? What movies do you watch? In the business environment, you have to understand you're never going to find the perfect person. Instead, you want to build a culture that brings the best out of the people you bring in. I've been able to focus on culture and that pulls in the type of people I need to do the things they do. And that drove diversity.

Booker: What advice do you have for other entrepreneurs of color?

Cola: Embrace your history. Don't hide from Black slavery. Don't hide from Jim Crow. Make that story a powerful story because it is a powerful story. It is one of resilience. I think you have to almost create a superhero narrative in your mind. Figure out how to take everything in your story and make it a positive you can leverage. I had a football coach and every day of practice he would say, “Pray for heat. Pray for heat. Because you get stronger in the heat.” Take the heat of history and turn it to a positive. It is easy to say that but hard to live it, because of the emotions. When you feel those emotions, use them too. When I was feeling that way recently, I took my family to the National Memorial for Peace and Justice in Montgomery. I told my children what I am telling you. Take that history and turn it from anger or shame, into power. That is the key.

Read the original article on Forbes.