Plastic Trash Can Now Be Recycled Into Ultra-strong Graphene 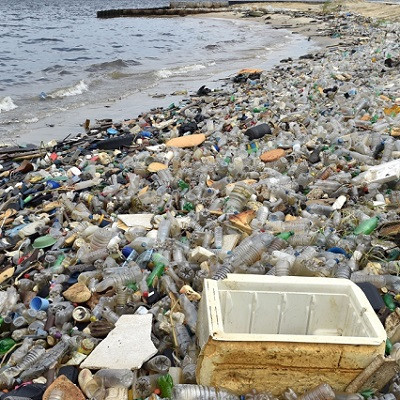 Packaging from the grocery store, lint from our clothing, plastic shopping bags – plastics and microplastics are everywhere, and they're not going anywhere. In fact, it will take them hundreds of years to decompose in landfills . In order to speed up this decomposition process, scientists from Rice University are transforming these discarded plastics into non-toxic, naturally occurring materials. They're doing this by using a newly developed technique called "flash Joule heating," to rapidly heat plastic materials to very high temperatures.

Currently, there are a few plastic recycling techniques that are widely used, with differing results. For example, plastic bags are a huge contributor to the plastic waste stream – Waste Management, a trash collection company, estimates that over one billion plastic bags are used each year in the US alone. Even more shockingly, each plastic bag is used for, on average, less than one hour. Currently, the most common way to recycle plastic bags is by compressing them into composite lumber or small pellets, which can be used for building materials. While this is an excellent way to reuse single-use plastic, this plastic still is not biodegradable.

In contrast, the "flash Joule heating" method turns plastic into graphene, which is highly recyclable and very stable. Graphene itself is incredibly strong and stretchy – 200 times stronger than steel. Graphene is a single layer form of graphite, a naturally occurring carbon-based mineral that is commonly found as pencil lead. Typically, graphite is mined and then mechanically processed in order to separate its layers, forming graphene. However, obtaining graphite can be expensive. By directly generating graphene from plastic waste, it is possible to reduce its production cost. Importantly, a reduced production cost can lead to broad implementation of graphene use outside of academic research – with lower production costs, graphene can be added to concrete, rubber, or asphalt to improve strength and performance. Innovations like this will likely make graphene much more widely available for commercial use.

In addition to reducing graphene production costs, using plastic to generate graphene has significant environmental impacts as well. First, high levels of pollution are caused by graphite mining. Generating graphene directly from plastic could disrupt the graphite supply chain, thereby decreasing mining activity and reducing pollution caused by mining. Second, this graphene production technique has the capability to transform landfills by reducing plastic waste. While graphene biodegradability is still being studied, research suggests that graphene can be broken down within a few months, which is much faster than other common plastics. Ultimately, direct laboratory production of graphene has the potential to make a huge environmental impact.

Flash joule heating is actually a fairly simple process that involves running a large current through plastic materials. Joule heating is a commonly used heating technique. If you've used an iron, you've seen Joule heating in action. When a current is passed through a conductive material, like the metal of an iron, it quickly generates heat. Flash joule heating just means that, rather than building up heat over time, a large initial current is passed through the material, which causes an intense burst of heat. In the case of plastic waste, with the right conditions, this intense heat can actually cause chemical transformations.

Read the original article on Salon.