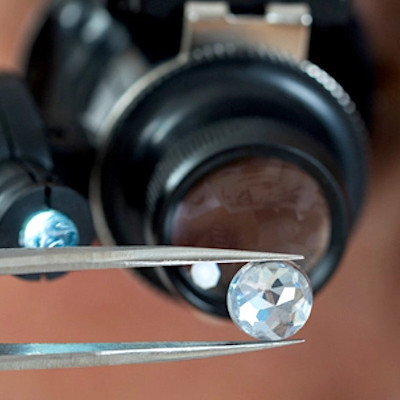 Nanotechnology is proving to be useful in the diamond industry’s quest for tracking every mined stone from its source to the final consumer, with the purpose of clearing the supply chain of imposters and conflict precious rocks.

The system also applies cloud-based storage solutions, smartphone optic systems and a proprietary smartphone consumer app to detect and read subsurface nano tags. The platform, in development for more than three years, is said to work just as successfully with lab-made diamonds.

Founder and CEO Bruno Scarselli says the new system works by placing a proprietary nano tag under the diamond’s surface, which is done with laser technology.

“This does not change the diamond’s clarity or colour, as per The Gemological Institute of America (GIA) grading standard,” Scarselli says.

Customers can then use a patent-pending consumer smartphone solution for Android and iOS phones to detect and read subsurface nano tags.

“It’s been a long road, but we finally have a scientific, mine-to-market, chain of custody solution that everyone in the diamond pipeline has been seeking,” Scarselli says.

De Beers, the world’s largest rough diamond producer by value, has said that, once established, its diamond traceability platform would operate as a shared system.

Alrosa, the No.1 diamond producer by output, joined Tracr in October 2018. The blockchain platform is a shared database of transactions maintained by a network of computers on the Internet, a technology currently being employed in the bitcoin sector.

Tracr gives each diamond a unique ID that stores stones characteristics such as weight, colour and clarity. To support the process, the system will also be using stone photos and planned outcome images.

Despite the establishment of the Kimberley Process in 2003, aimed at removing conflict diamonds (those mined in an area of armed conflict and traded illicitly to finance the fighting), from the supply chain, experts say trafficking of precious rocks is still ongoing.

Read the original article on MINING.