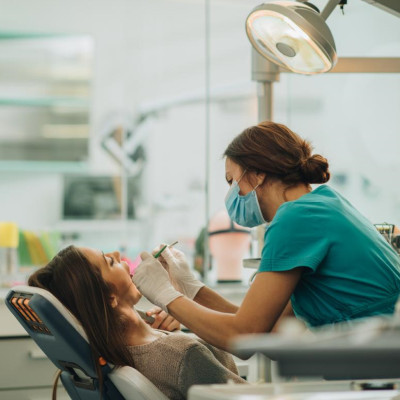 People’s teeth-chattering experiences in the dentist’s chair could be improved by fresh insights into how tiny, powerful bubbles are formed by ultra-fast vibrations, a study suggests.

The physics of how so-called nanobubbles are generated could have a range of clinical and industrial applications, including in dental hygiene devices used to remove plaque, experts say.

Their findings could also inform the development of other technologies – such as devices to selectively target tumour cells – that harness the energy released when the bubbles burst.

Edinburgh engineers ran complex supercomputer simulations to better understand the underlying mechanisms behind the formation of nanobubbles – which are tens of thousands of times smaller than a pinhead.

The team modelled the movement of individual molecules in a thin layer of water on a surface vibrating a million times faster than the flapping of a hummingbird’s wings.

Their analysis revealed that nanobubbles can form either when vibrations cause the water to boil, or when the water pressure drops to a point where liquid becomes vapour – a process called cavitation.

Researchers ran their calculations using the ARCHER UK National Supercomputing Service, which is operated by EPCC, the University’s high-performance computing facility. The study, published in the journal Nano Letters.

We now have a better understanding of how vibrations at the smallest scale can be exploited to produce nanobubbles. This work has a broad scope for future research and will help researchers devise new experiments to shed further light on the generation of nanobubbles.

Read the original article on The University of Edinburgh.