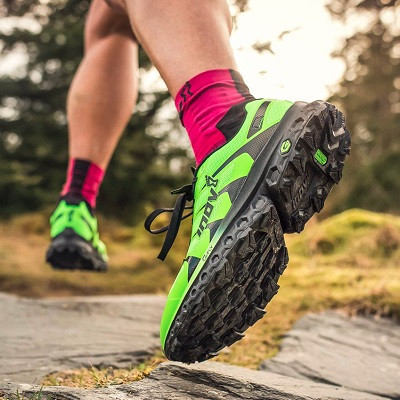 The collaboration between the University of Manchester and British sportswear brand Inov-8 started in 2017 and has already produced the G-Series range of graphene-enhanced shoes as well as a pair of hiking boots which utilize graphene, and also the X-Talon range of footwear. Now, Inov-8 has unveiled its latest trail running shoe, which is designed with new Graphene-enhanced foam.

Scientific tests reportedly show that the foam infused with graphene can deliver 25% greater energy return. It is also claimed to be far more resistant to compressive wear.

The theory is that the shoes will help runners to maintain a faster speed over greater distances, aid their feet in feeling fresher for longer and prolong the life of the footwear.

A cushioned trail shoe is new for inov-8 and the Trailfly Ultra G 300 Max has what is known as 'Adapter-Flex' technology "to adapt and react to uneven terrain".

The Trailfly Ultra G 300 Max, which weighs 300g and has a 6mm drop (heel to toe differential), is available to pre-order ahead of going on sale on April 8. The shoes are priced at £170.