Turkey Candidate to Be Major Graphene Producer with New Plant 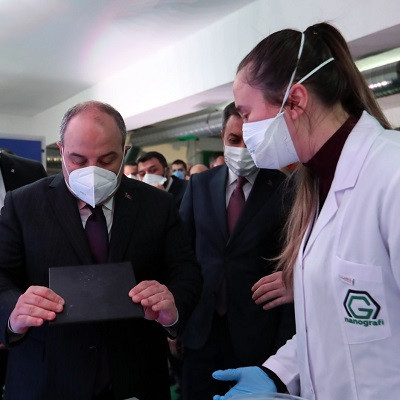 Turkey is set to place itself among 10 countries that can produce graphene on a large scale with the new plant in the capital Ankara, Industry and Technology Minister Mustafa Varank said Tuesday.

Pointing out the obstacles to commercial graphene adoption, Varank said Turkey will be one of 10 countries that can produce graphene on a large scale thanks to the new investment.

Graphene, which is made of a layer of tightly packed carbon, is light, 200 times stronger than steel and more conductive than copper.

Purely carbon-based graphene is one of the most critical components of nanotechnology with single-atom thickness.

Varank stressed that graphene will help the production of longer-lasting materials, ultra-fast rechargeable batteries, faster and lighter aircraft and bionic devices that can connect to neurons in the body.

“Bioelectronic medical technologies that provide real-time treatment by reading and changing body electricity will be developed, and corrosion, heating and transmission problems will be solved,” he added.

Citing the latest survey from the Graphene Council, Varank noted that the cost of the material, the mass production capability, standard and certification are the most prominent obstacles to graphene adoption.

The facility, which will produce graphene at a low cost and at an industrial scale with environmentally friendly methods, will be one of the largest in the world thanks to its capacity.