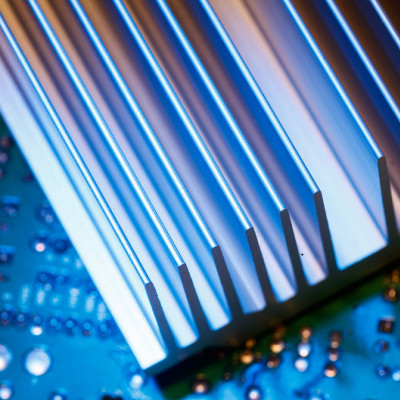 Researchers from Tokyo Metropolitan University have shown that a quantity known as "thermoelectric conductivity" is an effective measure for the dimensionality of newly developed thermoelectric nanomaterials. Studying films of semiconducting single-walled carbon nanotubes and atomically thin sheets of molybdenum sulfide and graphene, they found clear distinctions in how this number varies with conductivity, in agreement with theoretical predictions in 1D and 2D materials. Such a metric promises better design strategies for thermoelectric materials.

Thermoelectric devices take differences in temperature between different materials and generate electrical energy. The simplest example is two strips of different metals welded together at both ends to form a loop; heating one of the junctions while keeping the other cool creates an electrical current.

This is called the Seebeck effect. Its potential applications promise effective usage of the tremendous amount of power that is wasted as dissipated heat in everyday life, whether it be in power transmission, industrial exhaust, or even body heat.

In 1993, it was theorized that atomically thin, one-dimensional materials would have the ideal mix of properties required to create efficient thermoelectric devices. The resulting search led to nanomaterials such as semiconducting single-walled carbon nanotubes (SWCNTs) being applied. 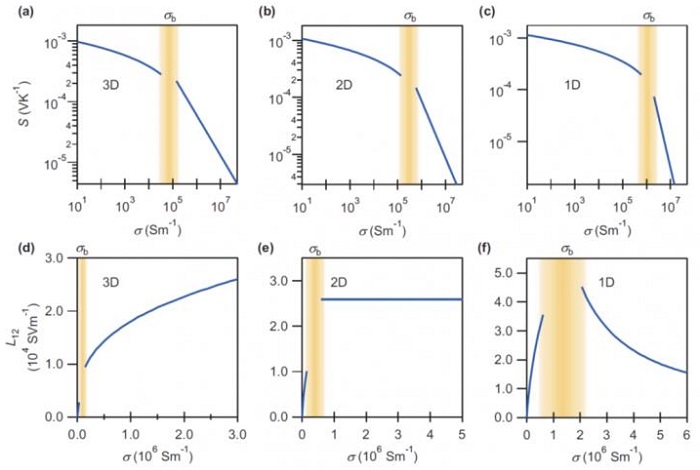 (a)-(c) show how the Seebeck coefficient varies for 1D, 2D and 3D materials, while (d)-(f) show the thermoelectric conductivity for the same systems. No major changes in the shape of the curves are seen for (a)-(c); drastic changes are seen for (d)-(e) beyond a threshold range marked in yellow, making thermoelectric conductivity a much more sensitive, unambiguous measure for dimensionality.

However, there was an ongoing issue that prevented new designs and systems from being accurately characterized. The key properties of thermoelectric devices are thermal conductivity, electrical conductivity, and the Seebeck coefficient, a measure of how much voltage is created at the interface between different materials for a given temperature difference.

As material science advanced into the age of nanotechnology, these numbers weren't enough to express a key property of the new nanomaterials that were being created: the "dimensionality" of the material, or how 1D, 2D or 3D-like the material behaves. Without a reliable, unambiguous metric, it becomes difficult to discuss, let alone optimize new materials, particularly how the dimensionality of their structure leads to enhanced thermoelectric performance.

To tackle this dilemma, a team led by Professor Kazuhiro Yanagi of Tokyo Metropolitan University set out to explore a new parameter recently flagged by theoretical studies, the "thermoelectric conductivity." Unlike the Seebeck coefficient, the team's theoretical calculations confirmed that this value varied differently with increased conductivity for 1D, 2D and 3D systems.

They also confirmed this experimentally, preparing thin films of single-walled carbon nanotubes as well as atomically thin sheets of molybdenum sulfide and graphene, archetypal materials in 1D and 2D respectively. Measurements conclusively showed that the thermoelectric conductivity of the 1D material decreased at higher values of conductivity, while the curve for 2D materials plateaued.

Combined with theoretical calculations, the team conclude that high thermoelectric conductivity, high conventional electrical conductivity, and low thermal conductivity are key goals for the engineering of new devices. They hope these measurable, tangible targets will bring much needed clarity and unity to the development of state-of-the-art thermoelectric devices.