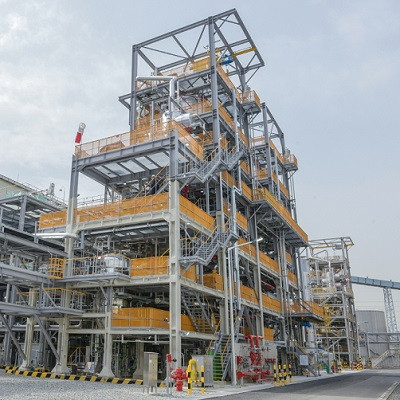 LG Chem said Wednesday that it had increased its production capacity of carbon nanotubes from 500 metric tons to 1,700 tons to meet growing demand for the raw material used in electric vehicle batteries.

According to South Korea’s leading petrochemical company, it has begun the commercial operation of a second carbon nanotube facility with an annual production capacity of 1,200 tons in Yeosu, South Jeolla Province.

“Carbon nanotubes manufactured from the plant No. 2 will be supplied to battery makers including LG Energy Solution,” an LG Chem official said. LGES is a wholly-owned subsidiary of LG Chem and one of the world’s leading producers of lithium-ion batteries for cars.

The global demand for carbon nanotubes is expected to spike to 20,000 tons in 2024, from 5,000 tons last year, buoyed by the exponential growth of EV battery market.

LG Chem plans to begin the construction of plant No. 3 this year.

Carbon nanotubes, tiny cylindrical tubes made of carbon atoms, offer the same conductivity as copper. They are added to cathodes, a positive side of lithium-ion batteries, to help electricity flow better. Carbon nanotubes can enhance batteries’ conductivity by 10 percent compared to conventional additives, according to LG Chem.

Read the original article on The Korea Herald.