Solar Cells in the Fold of Flexible Electronics 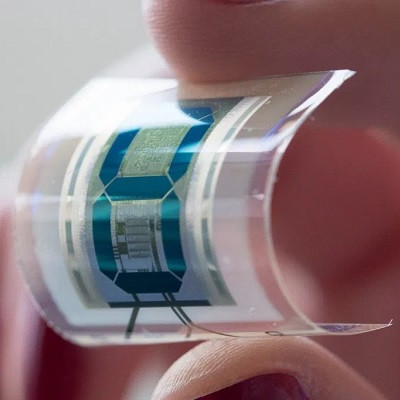 Single-walled carbon nanotube (SWNT) films could be the answer to foldable solar panels in indoor, light-harvesting, flexible electronics, suggest scientists in South Korea, thanks to their high transparency and mechanical resilience.

They claim to have achieved the highest power conversion efficiency of 15.2% in solar cells using SWNTs.

The team has embedded carbon nanotubes directly into polyimide (PI) during high-temperature curing. Inserted molybdenum oxide thermally dopes the SWNTs to enhance conductivity and transparency of the entire film. Researchers have then demonstrated its device applicability by applying it to perovskite solar cells.

By introducing small impurities – withdrawn electrons to molybdenum oxide – into the SWNT-PI nanocomposite layer, the energy needed for the electrons to move across the structure is much smaller, and more charge is generated for a given amount of current.

He adds, ‘Despite the word ‘solar’, future technology of solar cells are inching towards indoor light-harvesting wearable devices. This cannot be realised without highly conductive and mechanically flexible (foldable) transparent conductors. We can expect our new transparent conductors not only in solar cell applications but in many optoelectronic devices.’

The device has undergone a folding cycle test with a radius of less than 0.5mm. ‘Stability tests showed that the solar cells made with SWNT-embedded conductors could withstand over 10,000 folding cycles, unlike those using conventional conductors, for example, indium-tin oxide or carbon electrodes simply laminated on a substrate,’ Jeon explains. ‘The only foldable transparent conductor technology that stacks up to ours is PEDOT:PSS. However, PEDOT:PSS has drawbacks in chemical instability.

‘By embedding the carbon nanotubes in the polymer instead of simply depositing them, they achieved smooth morphology, excellent electrical resistance and unprecedented thinness in the solar cells.’

Jeon says that the research team is now looking to develop a stretchable device by modifying the PI composition.

Read the original article on The Institute of Materials, Minerals and Mining (IOM3).