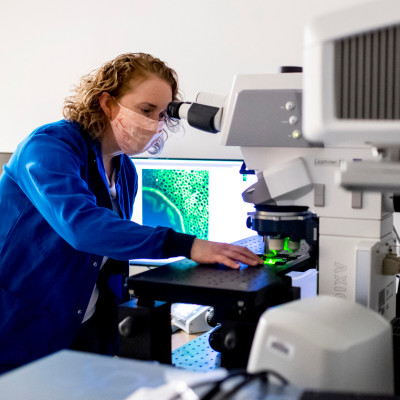 Scientists at Northeastern University have developed a nanosensor that can image communication between the brain and the body.

Every movement in the human body—from lifting our arms to our beating hearts—is regulated in some way by signals from our brains. Until recently, scientists often tracked and understood that brain-body communication only after the fact, sort of like listening to a voicemail as opposed to being on a call.

But researchers at Northeastern have developed a new type of nanosensor that allows scientists to image communication between the brain and the body in real time. They now can listen in on the call.

Heather Clark, professor of bioengineering and chemistry at Northeastern, and James Monaghan, associate professor of biology, along with colleagues at Northeastern and researchers from the University of California, San Francisco, developed a DNA-based nanosensor that detects a specific neurotransmitter, acetylcholine, as it’s released and picked up by target cells in living animals. They published their findings in the journal Proceedings of the National Academy of Sciences this month. 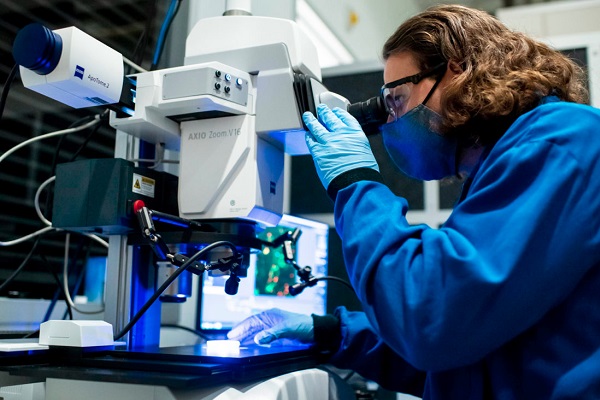 James Monaghan, institute co-director and associate professor of biology, helped develop a nanosensor that can image communication between the brain and the body.

“It’s critical, in terms of understanding the relationship between the brain and the body, to understand when the nerves are communicating—when they’re firing signals to tell the heart rate to speed up or slow down, for example,” Monaghan says.

Understanding this communication is particularly important when there’s a breakdown. Illnesses such as Parkinson’s Disease are the result of the degeneration of nerve cells and the breakdown of communication between the brain and the body.

A burgeoning field of medicine known as bioelectronic medicine seeks to use highly specific nerve stimulation to treat neurological diseases. In order to precisely target the nerves, scientists need to know how they react in real time and in living organisms—Clark and Monaghan’s nanosensor represents a step in that direction.

“If you’re going to use nerve stimulation as a medicine, you need a readout of how much stimulus you provided,” Monaghan says. “Dr. Clark’s chemistry and innovation in this area of sensor development would provide that readout for the neurotransmitter acetylcholine.”

The nanosensor consists of a fluorescent component that glows in the presence of acetylcholine and can be seen in living mice, in real time. It’s kind of like seeing someone’s cell phone light up for a phone call, but on a molecular level.

Existing tools such as microelectrodes and microdialysis enable scientists to detect acetylcholine in the central nervous system but fall short when it comes to the peripheral nervous system, which is everything outside the brain and spinal cord. 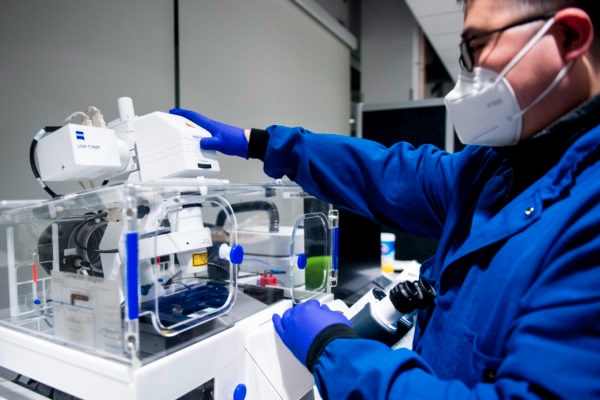 Guoxin Rong, core director, works in the Institute for Chemical Imaging of Living Systems in the Interdisciplinary Science and Engineering Complex.

Clark, Monaghan, and their colleagues utilized powerful microscopes housed at Northeastern, to watch the fluorescent markers light up as the neurotransmitter was activated in their experiments.

The development of this nanosensor is just the beginning, though, and the researchers hope to create even hardier sensors in the future.
Clark and Monaghan also expect that the sophisticated imaging tools they used to develop this nanosensor will be used by other scientists at Northeastern and beyond. They head the Institute for the Chemical Imaging of Living Systems, a new organization at the university in which researchers can take advantage of five state-of-the-art microscopes located in the Interdisciplinary Science and Engineering Complex.

“This is a set of tools that researchers can use to answer fundamental questions about biochemical signaling in the body,” Clark says. “As a scientist, I love developing new tools and fostering the kind of interdisciplinary research that could have a real impact in the world.”