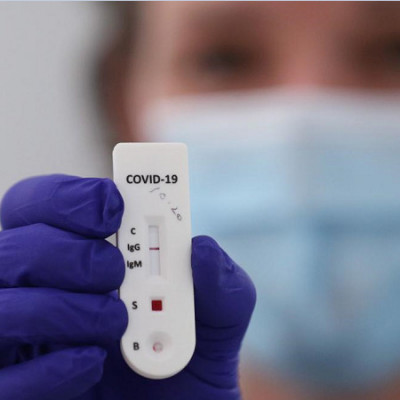 Sri Lanka Institute of Nanotechnology (SLINTEC), the country’s top nano and advanced technology and research institute is seeking emergency regulatory approval for its low-cost COVID-19 test kit based on RT-LAMP technology, which has the ability to deliver faster results that could be a critical factor for slowing down the on-going coronavirus third wave in the country.

While under the current PCR regime, it usually takes around 3-4 hours to receive test results in a lab, SLINTEC’s RT-LAMP-based test kit only requires around 30 minutes. It has also shown added benefits such as higher sensitivity and specificity.

However, in order for SINTEC to market and sell the test kits in the country, SLINTEC is required to obtain registration license from NMRA, which may take as much as six months under the usual process.

“We have met the State Minister of Production, Supply and Regulation of Pharmaceuticals, Prof. Channa Jayasumana and requested for a fast-tracked process to grant the approval given the current situation in the country. If we receive approval, then, we can move ahead with the production and make test kits available in the market within one month,” SLINTEC, Chief Operating Officer Heminda Jayaweera told Mirror Business.

Initially, SLINTEC RT-LAMP kit was validated against the existing RT-qPCR test at the University of Sri Jayawardenapura using over 300 clinical samples in August last year. Further, it was also independently validated by NMRA by testing them at MRI, IDH and Karapitiya hospital PCR laboratories.

According to Jayaweera, results of the initial trial conducted with RT-LAMP test kits perfectly matched with the results of RT-qPCR test, which was later again independently validated by NMRA by testing them at MRI, IDH and Karapitiya hospital PCR laboratories.

“In fact, RT-LAMP shows much better sensitivity than PCR. This is going to become the gold standard moving forward,” he stressed.

In addition to the ability to deliver quicker results, the country is also expected to decrease total reagent cost by three-fold with a potential four-fold increase in pipeline output by switching to RT-LAMP-based COVID test kits.

SLINTEC has predicted that Sri Lanka could save Rs. 150 million per month spent on COVID-19 testing.

Jayaweera hopes a test-kit to be priced below Rs.1000 in the market, the price of one third of a traditional PCR test kit.

“The final shelf price will depend on several factors in addition to output cost, the other costs-related to marketing, and distribution needs to be added up to determine the final price,” he said.

Although, Antigen test kits are priced below the traditional PCR test kits, he pointed out that Antigen tests have only 60 percent effectiveness in identifying the virus.

“Up to now, we have invested our own funds. However, we are looking at a private-sector partner in the pharmaceutical sector for the production and to set standards for continuous production. We are already in negotiation with two parties and hope to finalise it very soon,” Jayaweera noted.

“We are also working on developing home-test kits by using saliva. It’s still at the research stage. Initial test results are promising, but we can’t say much as it still in the research stage. The ultimate goal is to develop a test kit that is based on saliva and can get tested at your own home,” Jayaweera revealed.

As the RT-LAMP-based COVID test kit was developed with the support of open-source scientific community based out of Germany with inputs coming from various parties including European Union (EU), Jayaweera said SLINTEC would not seek to patent the initial test kit developed by them.

However, he said that SLINTEC may consider patenting future propriety products based on the same technology including home test-kits currently under research stage.

In addition, SLINTEC is also looking at developing diagnosis test kits for other viral diseases such as Dengue fever.