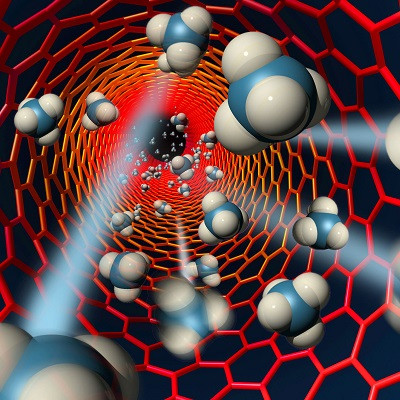 Modern medicine relies on an extensive arsenal of drugs to combat deadly diseases such as pneumonia, tuberculosis, HIV-AIDS and malaria. Chemotherapy agents have prolonged lives for millions of cancer patients, and in some cases, cured the disease or turned it into a chronic condition.

But getting those drugs into disease-ridden cells has remained a major challenge for modern pharmacology and medicine. To tackle this difficulty, Lawrence Livermore National Laboratory (LLNL) and University of California Merced scientists and collaborators from the Max Planck Institute of Biophysics in Germany have used carbon nanotubes to enable direct drug delivery from liposomes through the plasma membrane into the cell interior by facilitating fusion of the carrier membrane with the cell. The research appears in the Proceedings of the National Academy of Sciences.

Drugs are often poorly soluble, strongly toxic to other tissues or face rapid degradation in the different chemical environments in an organism. They can accumulate in non-target tissues, bind to other cellular components or may not internalize efficiently into the target cells.

Liposomal delivery systems aim to mitigate these problems by encapsulating drugs in external carriers that circulate through the bloodstream. However, these systems involve a trade-off between enhancing liposomal stability on the way to the target and easing payload release into the cytosol of the target cell.

Most current liposomal delivery strategies rely on the endosomal pathway for cell entry, which is inherently inefficient and often results in degradation of the drug. Commonly used cationic lipids, which enhance liposomal fusion with the target membrane and enhance endosomal escape, proved to be toxic. 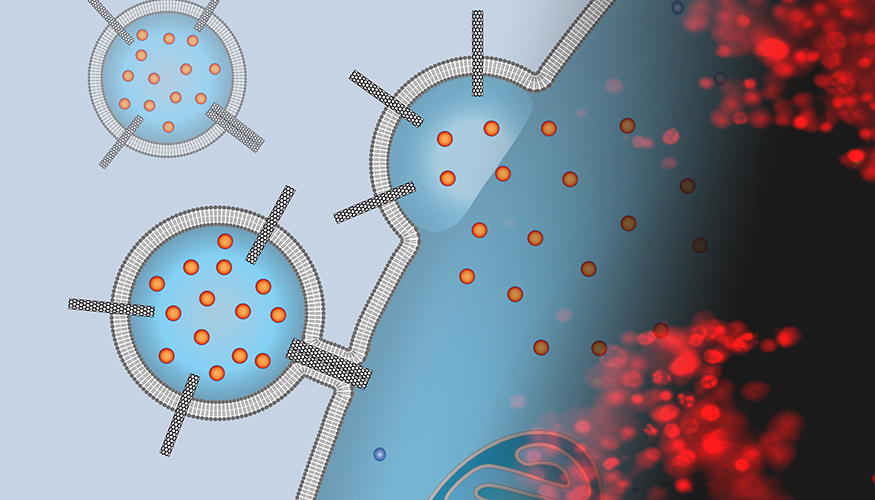 The image is a montage of an artist’s depiction of a liposomal drug carrier studded with carbon nanotube porins that is docking to a cancer cell surface and delivering chemotherapy cargo with a fluorescence microscopy image of stained cells exposed to these carriers. The red stain indicates that the cells are dead and the treatment was successful.

“We thought that carbon nanotube porins — short pieces of carbon nanotubes inserted into lipid membranes — can mimic viral fusion peptide functionality and help to fuse the liposomal carriers to the membranes of cancer cells,” said scientist Alex Noy, who led the research at LLNL.

In a series of experiments, the team demonstrated that a simple nanomaterial platform — a dimer of small-diameter carbon nanotube porins (CNTPs) — functions as a potent promoter of membrane fusion. Moreover, when Noy and his team loaded their liposomes with a potent chemotherapeutic agent (doxorubicin), these carriers delivered the drug to cancer cells, killing a majority of them.

“Our results open an avenue for simple and efficient drug delivery carriers compatible with a wide range of therapeutics,” said Nga Ho, an LLNL postdoctoral researcher and the co-first author of the paper.

Coarse-grained molecular dynamic simulations, performed by the team at Max Planck, revealed a distinct and unusual fusion mechanism where CNTP dimers tether the vesicles, pull the membranes into proximity and then fuse their outer and inner leaflets.

“We were very happy to see that membrane fusion facilitated by small diameter carbon nanotube porins can lead to complete mixing of the membrane material and vesicle interior content,” said Marc Siggel, a graduate student at Max Planck, and a co-first author of the study.

“Our experiments demonstrate that CNTP-studded liposomes can provide the basis for constructing the long-desired, but so far elusive, versatile carrier for direct and highly efficient delivery of drugs and DNA and RNA vaccines across the plasma membrane,” Noy said.

“This strategy could bypass the endocytotic pathway entirely and thus avoid some of the problems encountered by previous delivery strategies,” added Gerhard Hummer, a theoretical biophysicist at Max Planck Institute, who led the modeling effort.