Research Breakthrough in the Fight Against Cancer A team of researchers at the Center for Bioactive Delivery at the University of Massachusetts Amherst’s Institute for Applied Life Sciences has engineered a nanoparticle that has the potential to revolutionize disease treatment, including for cancer. This new research, which appears today in “Angewandte Chemie,”combines two different approaches to more precisely and effectively deliver treatment to the specific cells affected by cancer.

Two of the most promising new treatments involve delivery of cancer-fighting drugs via biologics or antibody-drug conjugates (ADCs). Each has its own advantages and limitations. Biologics, such as protein-based drugs, can directly substitute for a malfunctioning protein in cells. As a result, they have less serious side effects than those associated with traditional chemotherapy. But, because of their large size, they are unable to get into specific cells. ADCs, on the other hand, are able to target specific malignant cells with microdoses of therapeutic drugs, but the antibodies can only carry a limited drug cargo. Since the drugs are more toxic than biologics, increasing the dose of ADCs increases the risk of harmful side effects.

“What our team has done,” explains Khushboo Singh, a graduate student in the chemistry department and one of the study’s lead authors, “is to combine the advantages of biologics and ADCs and address their weaknesses. It is a new platform for cancer therapy.” 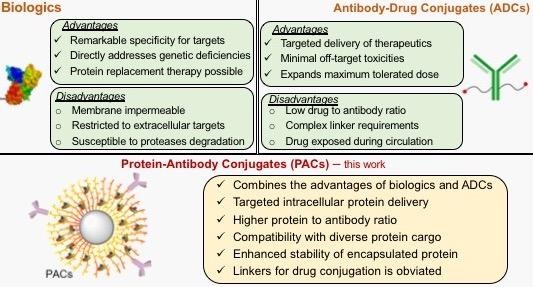 The advantage of PACs over other therapies.

The team’s approach depends on a nanoparticle the team engineered called a “protein-antibody conjugate,” or PAC. “Imagine that the antibodies in PACs are the address on an envelope,” adds Sankaran “Thai” Thayumanavan, distinguished professor in chemistry and interim head of biomedical engineering at UMass, “and that the cancer-fighting protein is the contents of that envelope. The PAC allows us to deliver the envelope with its protected treatment to the correct address. So, safer drugs are delivered to the right cell—the result would be a treatment with fewer side effects”

At the heart of the PAC is a “polymer brush,” a nanoparticle that the team engineered. This brush does two things. First, it is studded with antibodies that are capable of locating individual cancerous cells. Next, the brush has to both hold a sizable cargo of biologics but also keep that dose intact. The team found that their nanoparticle could carry four times the therapeutic dose of a typical ADC, and, through a variety of techniques, could be increased many times over.

While the UMass team’s research represents a major milestone in cancer research, their findings are also widely applicable, and “open many new opportunities in biomedicine, extending far beyond cancer to all sorts of genetic diseases, or really any abnormality that occurs inside a human cell,” says Bin Liu, one of the papers lead authors and a graduate student in the UMass chemistry department at the time of the research.

“Among the implications,” says Thayumanavan, “perhaps the most exciting part is that this opens the door to develop cures for certain cancers that have been long considered undruggable or incurable” The team’s research is currently being tested in models beyond a petri-dish.