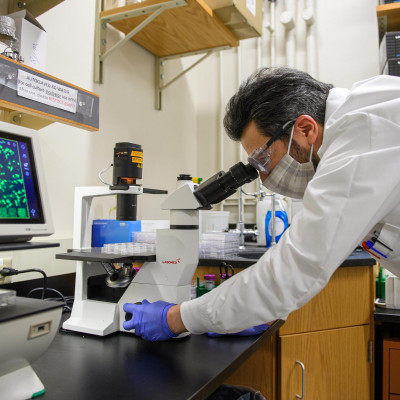 FameLab TU/e 2020 winner Sophia E. Shanko defends her PhD on the use of magnetic microbeads in lab-on-chip devices to enable rapid diagnostic testing.

Currently, we are striving to curb the spread of COVID-19. While large-scale restrictions can hinder the virus, accurate and rapid diagnostic testing can help health services to better monitor and contain the virus. For this, suitable test devices are needed, such as those based on lab-on-chip technologies where test samples are mixed with detection molecules that bind to the virus and then emit a signal such as light. For her PhD research, Sophia E. Shanko explored how this binding process can be accelerated using magnetic particle mixing, which can have significant implications for future diagnostic testing devices. Shanko defends her thesis on May 10th at the department of Mechanical Engineering.

COVID-19 knows no borders or boundaries and has spread like wildfire through countries and continents. While societal restrictions, such as lockdowns, can limit its spread, the need for rapid point-of-care diagnostic testing remains.

“Rapid testing allows for the quick identification of cases, and the provision of fast and suitable treatments for infected individuals,” says Sophia Shanko, PhD researcher in the Microsystems research group under the supervision of Jaap den Toonder. “Such tests would not only help provide people with timely treatments but also inform decision makers who can then impose local containment measures. And such tests aren’t just for COVID-19, they could be used to test for other viral infections in the future.”

LAB-ON-CHIP DEVICES
Many new and innovative test devices are based on lab-on-chip technologies. These devices have numerous advantages such as a wide range of applicability, small size, and fast analysis capabilities. In these devices, a sample (such as blood), which needs to be tested for a target molecule (like an antibody that signals the presence of a virus), is mixed with a fluid containing detection molecules that can bind to the target molecule. If the target is present, binding with the detection molecule generates a signal such as light.

“The binding process in these devices needs to be fast and accurate, and this can be achieved by ensuring that the detection molecules are thoroughly mixed with the test sample as soon as possible,” says Shanko, who also won FameLab TU/e 2020 where she spoke about her PhD research. “The very small dimensions of lab-on-chip technologies allow mixing only by molecular diffusion, the inherent motion of molecules within a fluid due to temperature and concentration differences. However, this is a time-consuming process.”

WARMING
The ill-effects of slow molecular diffusion can be partially nullified using passive or active methods. For the former, geometrical structures are included in the test device, while in the latter, external forces, like magnetic forces, can be used to change the flow in a controlled way. The latter have been studied to produce high and controlled mixing capabilities at a relatively low cost.

The strength and the frequency of the external magnetic field plays a key role in dictating how the microbeads move in the fluid, which in turn affects the mixing. “There’s a ‘sweet spot’ for the parameters controlling the magnetic field where the microbeads move in patterns like those seen in bird swarming. Mixing of the beads with the test sample then leads to faster binding between the targets and the detection molecules, and a faster test result.”

ONTO MUSHROOMS AND MICROFLAPS
Microbead swarming is an example of dynamic mixing, but Shanko also looked at alternatives for generating dynamic mixing, where the magnetic beads are controlled by external static mushroom-shaped magnetic structures to help induce this mixing. It is scientifically very interesting to see how the magnetic beads behave and to observe the fluid kinetics that they, in turn, cause. “Although the mushroom shaped structures can generate very high fluid velocities that could induce efficient mixing, they ended up negatively affecting the overall mixing process.”

Finally, Shanko looked at the inclusion of magnetic flaps attached to the base of lab-on-chip devices which were controlled using the external magnetic field. “The microflaps do improve mixing of the detection molecules in the sample, but further experiments are required to better understand their effect.”

THINKING APPLICATIONS AND THE FUTURE
With COVID-19 still tightly gripping the world, accurate diagnostic tests for the virus will be needed for some time. “The pandemic has shown us that there is a need for fast and effective diagnostic testing. My research shows that detection of antibody molecules in lab-on-chip devices could be speeded up through the use magnetic microbeads and external magnetic fields. This technology is needed for the future to help us better monitor the presence and spread of outbreaks in the future.”

For this FameLab TU/e winner, the next step is the development of her diagnostic start-up. Shanko: “I am very happy with the outcome of my PhD research which is being translated into several scientific papers. It’s great to see that magnetic bead micro-mixing has the potential for fast and high precision diagnostics. Though my PhD is coming to an end, my love for diagnostics is only just in the beginning”.

Read the original article on  TU/e.