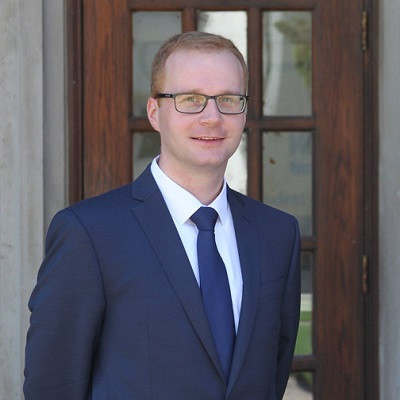 University of Oklahoma researcher Stefan Wilhelm, Ph.D., recently received a prestigious Faculty Early Career Development Program Award from the National Science Foundation. The NSF awarded Wilhelm a $761,727 CAREER award to continue his research in nanotechnology, which assists in the diagnosis and treatment of diseases such as cancer.

Wilhelm’s work focuses on individual nanoparticles – which are about 1,000 times smaller than the diameter of a human hair – and how they interact with the body’s cells. “I’m so pleased to get this kind of recognition and financial support from the National Science Foundation,” said Wilhelm, who joined the OU faculty in 2017. “The award not only allows me to continue my research to help design safer and more effective nanoparticles to diagnose and treat diseases, but also will help increase the number of Native American students in college STEM programs.”

Beyond research, the grant will fund Wilhelm’s BE4NANO – Bionanotechnology Engagement for Native Americans in Oklahoma – an outreach program that focuses on high school juniors, including students who are members of the Kiowa and Wichita tribes, in rural southwest Oklahoma. “Working and partnering with the Kiowa and Wichita tribes as well as the Caddo-Kiowa Technology Center over the past years has given, and will continue to give, me an opportunity to support and learn from tribal educators and youth who live in these communities,” Wilhelm said.

The NSF’s CAREER awards are five-year grants given to early-career faculty who show potential to serve as academic role models. In 2014, Wilhelm earned a doctorate in chemistry from the University of Regensburg, Germany, and from 2014 to 2017, he continued his training as a postdoctoral fellow at the University of Toronto in the Canadian province of Ontario.

The project is jointly funded by the Nanoscale Interactions Program with the Chemical, Bioengineering, Environmental and Transport Systems Division of the NSF and the Established Program to Stimulate Competitive Research.