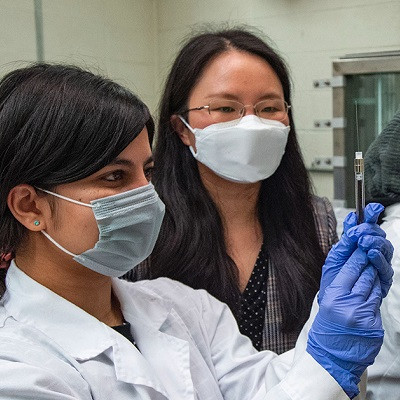 A team of students from Southern Illinois University Carbondale is looking at using the power of the sun, combined with iron-based nanomaterials, to destroy the harmful effects of algae blooms afflicting Campus Lake, a common problem throughout the country.

The team, led by Jia Liu, assistant professor in the School of Civil, Environmental and Infrastructure Engineering, recently received a start-up, proof-of-concept grant from the U.S. EPA to begin testing the idea. The $25,000 grant from the People, Prosperity and the Planet Program – or P3 – offers students hands-on experience that brings their classroom learning to life, while also allowing them to create tangible changes in their communities.

P3 is a unique competition open to teams of college and university students working to design solutions for a sustainable future. It aims to foster progress toward environmental awareness by achieving the symbiotic goals of improved quality of life for all people, economic prosperity and protection of the planet. SIU’s solution to this problem, for instance, could potentially be applied to other communities having similar issues.

The SIU team is eligible to compete for a Phase II grant of up to $100,000, which would be used to implement its design in a real-world setting.

As with other places, occasional periods of rapid growth, or “blooms,” of the harmful blue-green algae known as cyanobacteria have vexed university officials for several years. Human contact with the water can cause skin rashes, and officials have strongly recommended keeping animals out of the water as well during such blooms.

Consequently, use of the lake for swimming and fishing has been restricted while the university has searched for an environmentally responsible approach to the issue. Along with monitoring algae levels, officials have explored various options to address the naturally occurring problem on a long-term basis.

Liu’s team will attempt to mitigate the harmful algal blooms in the early stages by reducing the amount of cyanobacteria, degrading cyanotoxins and removing phosphorus from the water. Ruopu Li, associate professor in the School of Earth Systems and Sustainability, will lead the effort to monitor water quality using an aerial drone at key times.

After taking samples from the lake, team members will use a gene-based method known as qPCR to determine the concentration of toxic cyanobacteria in a bloom.

The team will then employ magnetic photocatalysts, or iron-based nanoparticles, to mitigate the toxins. Photocatalysis is a process by which light is used to accelerate a chemical reaction. In a previous project, Liu won another P3 grant to investigate using photoreactors and iron nanoparticles to remove a group of toxicants from water samples. In this case, however, natural sunlight will serve as the light source for the chemical reaction.

“We will use solar light and the nanoparticles to inactivate toxic cyanobacteria via physical attack and generated free radicals, and to degrade cyanotoxins released from these toxic bacterial species through photocatalytic process, and to remove phosphates by adsorption,” Liu said. Adsorption is the process by which a solid holds onto molecules of a gas or liquid as a thin film.

Because the nanoparticles are iron-based, they can easily be removed from the water using magnetic methods, thus minimizing the addition of extra solid material to the lake sediments.

The research will focus on both Campus Lake and the Carbondale Reservoir, both of which have experienced harmful algal blooms in the past.

The first phase of the work will last one year, from December 2020 to this coming November. Liu said the team hopes to compete for a Phase II grant after that, which would lead to a much larger effort to mitigate the problem.

“If our Phase II project can be funded during the early stage of blooms, a floating system carrying a water treatment unit will be operated on the lake,” Liu said. Kang Chen, assistant professor in the School of Electrical, Computer and Biomedical Engineering, will lead that effort.

The team members’ majors range from engineering to geography to chemistry. This being her second P3 grant, Liu said she enjoys working with the program “because it encourages involvement of talents of faculty and students from different departments and schools to solve critical environmental problems.”