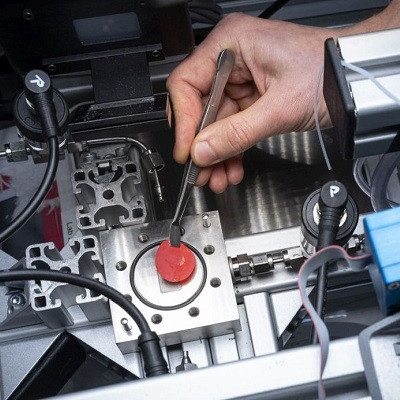 Micropollutants such as steroid hormones contaminate drinking water worldwide and pose a significant threat to human health and the environment even in smallest quantities. Until now, easily scalable water treatment technologies that remove them efficiently and sustainably have been lacking. Scientists at the Karlsruhe Institute of Technology (KIT) developed a new chemical process for removing hormones. It takes advantage of the mechanisms of photocatalysis and transforms the pollutants into potentially safe oxidation products. The team reports on this in the scientific journal Applied Catalysis B: Environmental.

Organic pollutants such as pharmaceuticals, pesticides, and hormones – even at nanoscale concentrations – contaminate drinking water in a way that poses significant risks to humans, animals, and the environment. In particular, the steroid hormones estrone, estradiol, progesterone, and testosterone can cause biological damage in humans and wildlife. The European Union has therefore set strict minimum quality standards for safe and clean drinking water, which must also be taken into account in the development of new technologies for water treatment.

“The challenge for science is to develop more sensitive methods to target the hormone molecules,” says Professor Andrea Iris Schäfer, Head of the Institute for Advanced Membrane Technology (IAMT) at KIT. The main problem is that steroid hormones are very hard to detect in water. “There is one hormone molecule for every quintillion water molecules. This is an extremely low concentration,” explains the expert.

With conventional water treatment technologies, wastewater treatment plants can neither find nor remove micropollutants. Researchers at the IAMT and the KIT Institute of Microstructure Technology (IMT) are therefore working on new methods to not only detect and measure micropollutants, but also remove them. A new, photocatalytic process proves to be promising. The scientists coated a commercially available large-pore polymer membrane with Pd(II)-porphyrin, a palladium-containing, light-sensitive molecule that can absorb visible radiation.

Exposure to radiation with simulated sunlight initiates a chemical process that produces so-called singlet oxygen, a highly reactive oxygen species. The singlet oxygen specifically “attacks” the hormone molecules and converts them into potentially safe oxidation products. “It is crucial that we coat the surface of each pore with the photosensitizer molecule, increasing the surface area of attack,” explains Roman Lyubimenko, a scientist at IAMT and IMT.

Significant Reduction of the Estradiol Concentration

The chemical decomposition of steroid hormones and the filtration of other micropollutants can be realized in a single module. With this process, filtering of 60 to 600 liters of water per square meter of membrane is possible in one hour. The scientists were able to reduce the concentration of estradiol, the most biologically active steroid hormone, by 98 percent from 100 to 2 nanograms per liter. “This means that we are already very close to the EU target value of one nanogram per liter,” emphasizes Schäfer.

The next goal of the research team is to further optimize the photocatalytic process and transfer it to a larger scale. Open issues are to find out how much light intensity and how much porphyrin will be needed and whether the costly palladium from the platinum group of metals can be replaced by other metals.