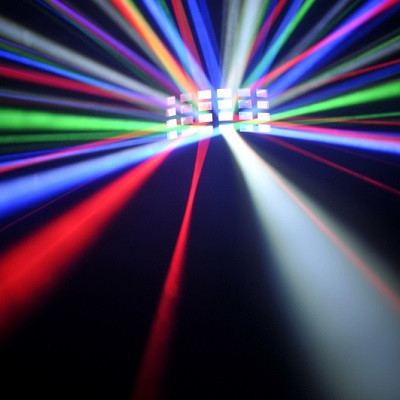 A team of Russian scientists including researchers from ITMO University, A.M. Prokhorov General Physics Institute, the Institute for Physics of Microstructures of the Russian Academy of Sciences, Skolkovo Institute of Science and Technology, and Lomonosov Moscow State University succeeded in enhancing the luminance of quantum dots on a silicon substrate. The methods used by the scientists can help create next generation microchips that will receive and transfer information from a computer to a fiber-optic network a lot faster. The article was published in Laser & Photonics Review.

Modern computers that are based on silicon microcircuits can do millions of operations a second. Fiber-optic communication lines give us the opportunity to transfer terabytes of information between buildings, cities and even continents. Issues arise at the interface between the chip and the cable, when it is necessary to transform the electric signal that encodes information into a luminous signal that goes to a server, and vice-versa. Also, it would have been great to use optical conductors instead of metal ones in or between chips to reduce the heat release losses.

“Unfortunately, silicon only weakly interacts with light: it's not good at emitting and absorbing photons. Or maybe it is a good thing, otherwise our computers and smartphones would be shining rather than working. In any case, “teaching” silicon chips to effectively interact with light is a very important task,” comments Sergei Tikhodeev, a professor at Lomonosov Moscow State University and researcher at A.M. Prokhorov General Physics Institute.

Research teams from all over the world seek to solve this task, and Russian scientists are no exception. Bridging the “translation problem” between the electric signal and a luminous signal will result in a considerable increase in the data exchange speed between computers and servers. Among people working in this field is a major team of Russian scientists from ITMO University, A.M. Prokhorov General Physics Institute, Institute for Physics of Microstructures of the Russian Academy of Science, Skolkovo Institute of Science and Technology, and Lomonosov Moscow State University.

There are high hopes for the use of optoelectronic integrated systems in the creation of silicon chips that would effectively interact with light. Simply put, these are silicon structures that have germanium (or other light active material) quantum dots that effectively process electric signals. These “nanoislands” can emit light at a 1.55-micron wavelength – the same band that is used for transmitting information via an optical fiber.

But there is a problem: such nanoislands on a silicon substrate are not good at emitting light.

“The current level of the emission recombination’s efficiency, the existing photoluminescence for silicon-germanium structures is too low for their practical application as emission sources in CMOS-compatible optoelectronic integrated circuits,” explains Alexey Novikov, a research associate at the Institute for Physics of Microstructures of the Russian Academy of Sciences.
In layman's terms, the intensity of light of such nanoislands is not enough to encode and transfer data as a luminous signal via a cable.

In order to increase the intensity, the Russian scientists decided to use special optical resonators that help accumulate and therefore enhance the optical signal. Specialists at ITMO’s Faculty of Physics develop such resonators.

“If the light source isn’t powerful enough, resonators can be used to significantly enhance the incident radiation inside them by effectively accumulating photons – particles of light,” says Andrey Bogdanov, an associate professor at ITMO. “Not so long ago, scientists started to actively research optical resonators based on bound states in the continuum. They took this idea from the field of quantum mechanics. The effective entrapment of light inside the resonator takes place thanks to the symmetry of the electromagnetic field inside the resonator not corresponding to the symmetry of electromagnetic waves of the environment. This helps to effectively trap the light inside the resonator.”
The light signal that gets into such a resonator is not emitted right away but is accumulated there, becoming stronger. Thanks to the use of such structures, scientists can enhance the glow of germanium “islands” on a silicon substrate by more than a hundred times.

“This happens because the law of total internal reflection isn’t applicable to a structure with nonplane interfaces, much like this law isn’t applicable to the reflection of light from the surface of CDs, which is why they look iridescent. In case of a structure with nanoislands, it is possible to use a similar effect in a smart way and make the photoluminescence really intense thanks to a correct design of a photonic crystal lattice,” explains Sergey Dyakov, a senior research associate at Skolkovo Institute of Science and Technology.

At this point, even such an efficiency increase does not give germanium nanodots on silicon substrate enough luminance. But what is important is that scientists demonstrated the prospects of their optimization with the use of optical resonators based on bound states in the continuum.

“Our results open up new prospects for the creation of effective silicon-based emission sources that can be integrated in modern microcircuits for optical signal processing. As of now, the team is working on the task of creating light-emitting diodes based on such structures and the principles of their conjunction with other elements in an optoelectronic chip,” notes Margarita Stepikhova, a senior research associate at the Institute for Physics of Microstructures of the Russian Academy of Sciences.

According to Andrey Bogdanov, the team's research is still at its early stages.

“There are a lot of things that can be done to improve our structure. By resolving them, we plan to attain even greater efficiency,” concludes the scientist.