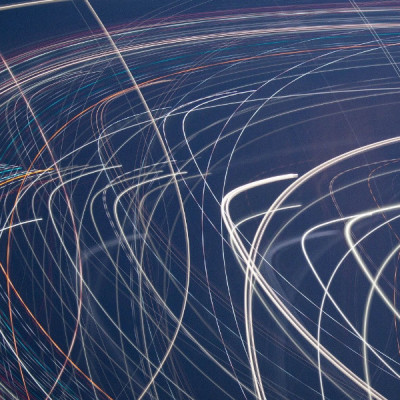 Is it possible to drive nanoparticles to orbit below the light diffraction limit using a Gaussian beam A recent joint research project reported in Nature Communications says yes.

It is well known that light possesses not only energy but also momentum. When light irradiates an object, momentum is transferred to the object, thus generating light pressure on the object. At the microscopic scale, microparticles and nanoparticles (such as biocells and macromolecules) can be manipulated by the light force. Atoms can be cooled by light pressure to achieve atomic clocks, Bose-Einstein condensation, and so on.

In addition to the linear momentum of light being transferable, the angular momentum of light can also be transferred to an object, thus causing object rotation. Since the conversion of momentum is usually derived from the linear interaction between light and objects, the orbital rotation speed and orbital radius have so far been limited to no more than 100 Hz in water and no less than one micrometer, respectively.

Recently, however, a team led by Prof. JIANG Yuqiang from the Institute of Genetics and Developmental Biology (IGDB) of the Chinese Academy of Sciences (CAS), in collaboration with Prof. QIU Chengwei from the National University of Singapore, Prof. YANG Yuanjie from the University of Electronic Science and Technology of China (UESTC), and Prof. XIAO Liantuan from Shanxi University, has overcome these limits.

Based on the nonlinear optical effect, the researchers have achieved an ultra-fast orbital rotation rate for nanoparticles at the subdiffraction scale. 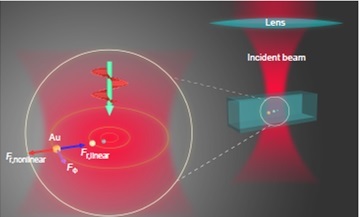 Illustration of the experimental setup and the mechanism of nonlinear particles orbiting in light.

The researchers trapped gold nanoparticles using a circularly polarized NIR femtosecond laser beam with Gaussian mode. In the linear interaction regime, the trapped particles only spin in the beam center. In the nonlinear regime, however, an annular potential well can be formed by the effect of the “trap split,” and the tangential optical force enhanced by the nonlinear polarization between the femtosecond laser and gold nanoparticles causes the particles to orbit at an ultra-fast speed in the annular trap well.

In this work, the minimum radius of rotation was about 70 nm, which is far below the diffraction limit; and the highest orbital rotation speed exceeded 1000 r/s, one order faster than previously reported speeds.

Since the orbital radius and orbital rotation speed can be controlled by adjusting the power of the femtosecond laser, the NA of the objective lens, and the material of the nanoparticles, it can be widely applied in various fields, such as optical micromachines, nanorheology, laser microfabrication, and so on.

Read the original article on Institute of Genetics and Developmental Biology.