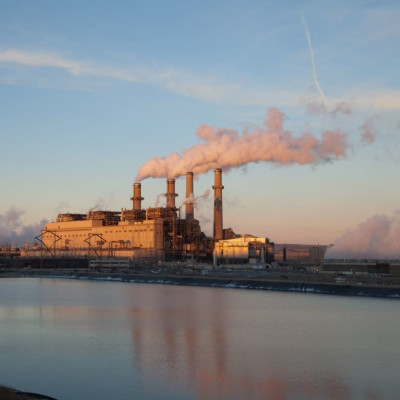 Our world produces heat around the clock – through the operation of smartphones, heating systems, servers and factories. In the field of nanotechnology, a team of researchers at TU Darmstadt is finding a way to better utilize this heat for the generation of electricity and thus making a contribution to sustainability.

Every time that we play a YouTube video or simply google a word, a little heat is created in the computer centres located around the world. A robot arm that welds together car parts in a factory, a truck and naturally our own bodies all produce heat. This heat only makes a small contribution to global warming but it is also energy. Around 70 percent of the heat that is produced by people disappears unused into the atmosphere. While large industrial plants use heat as a source of energy, it has not yet been worthwhile to convert this type of energy at temperatures less than 100 degrees Celsius. Converting waste heat into electricity using current technologies is an inefficient process. As well as being scarce, the materials needed for this process are expensive and not environmentally friendly.

This situation could change in the future. The first steps in this direction are being taken in an unusual field of research in the Department of Mechanical Engineering at TU Darmstadt: Professor Steffen Hardt and his team are conducting research into fluids at the nano and micrometre scale – often without focussing on the specific types of application for which their findings could be relevant. The researchers are aiming to break new ground and trying to understand how liquids and gases behave in different states and environments at small scales. And one of the phenomena that the researchers have observed has now attracted the attention of energy researchers. This is because it has the potential to allow electricity to be generated from lower temperature differences more efficiently than ever before in the future – using cheaper and more sustainable materials.

The phenomenon observed by the researchers is similar to a familiar effect: When a thermoelectric material is exposed to a temperature gradient, electrons flow from one end to the other – generally from warm to cold. This creates an electromagnetic field and thus a voltage. The greater the difference in temperature, the higher the voltage that is produced. “However, these types of thermoelectric materials are not especially efficient”, says Steffen Hardt. “This means that they can only convert a small fraction of the heat into electrical energy, which to some extent is due to the principal limitations of the physics behind the process.” These materials are also difficult to produce and require the elaborate process of atomic layer deposition in some cases. Such technologies are not suitable for broad applications.

Using theoretical models, the researchers have now discovered that an ion flow can be created in certain structures with overlapping so-called “electric double layers” when exposed to a temperature gradient. These types of nanochannels have a diameter of around 10 nanometres. They are thus smaller than, for example, viruses – the coronavirus is around 100 nanometres in size. If there is a saline solution in these nanochannels, the ions located near to the wall create a charged layer within the fluid. This layer expands as the temperature increases, which causes the ions to move when one end of the tube is warmer than the other. This motion also generates an electrical field. The voltage produced is, however, many times higher than the one due to the so-called Ludwig-Soret effect. The latter describes the movement of electrolytes due to a temperature gradient. However, the researchers still face considerable challenges before this conversion process in nanochannels can be used in practical applications. The physics is extremely complex due to various superposed phenomena and it is not yet clear how to design systems where the efficiency of the energy conversion process is optimised. In addition, it tends to be difficult to produce tailor-made nanostructures based on theoretical findings.

“Our research in this field was initially based on purely theoretical and knowledge-driven investigations that allowed us to discover this phenomenon”, says Hardt. “But this was completely uncharted territory for us and we did not have any plans in the beginning for how to put the theory into practice. We lacked the experimental capabilities for this purpose.” His team at the institute is not able to produce the nanonchannels required for the research. But then Justin Holmes, Professor of Nanochemistry and Head of the Materials Chemistry & Analysis Group (MCAG) at University College Cork in Ireland, became aware of the work published by the team at TU Darmstadt. His group has just the right facilities to develop these types of materials.

Subhajit Biswas, a researcher in Holmes’ group says: “When we came across the theory paper on the conversion of heat in a confined electrolyte solution, we realised that combining this theoretical knowledge with University College Cork’s expertise in materials, membranes and heat-to-electricity-conversion technology could create a new and highly-efficient low grade waste heat harvesting device with enormous impact.” 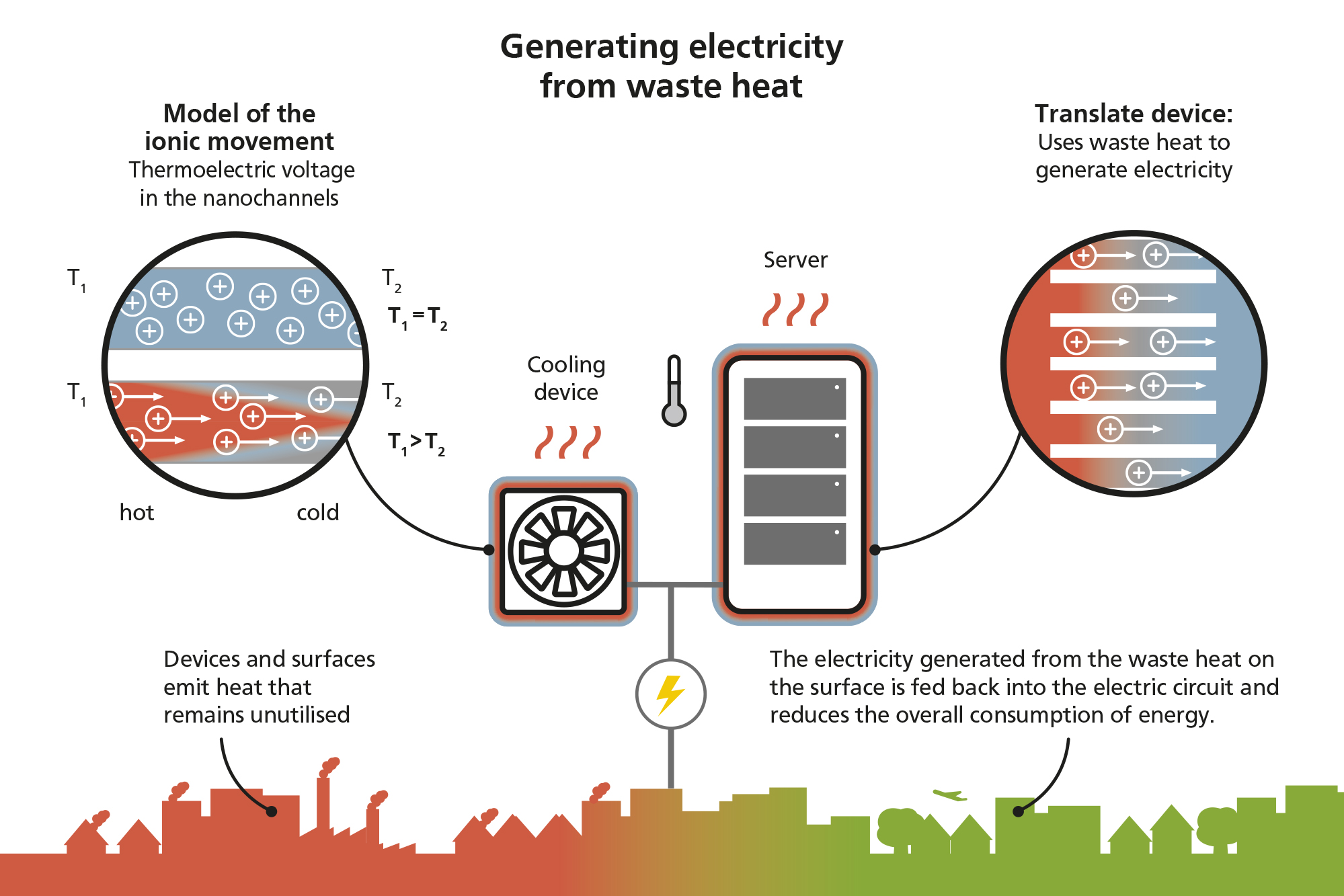 Prof. Hardt and his team are carrying out research that will enable waste heat released by people and machines to be converted into electricity in the future. The basic principle behind this energy conversion process is the transport of ions in nanochannels within a temperature field.

Holmes proposed to Hardt that they should work together to push forward the research and apply for one of the highly sought-after EU Horizon grants – with great success. The project named “Translate” was recently awarded funding of 3.5 million euros from the EU Horizon 2020 “EIC Pathfinder Open” programme. The University of Lithuania and the Spanish company Cidete Ingenieros S.l., a specialist in thermoelectric technology, are also involved in the project. The initial aim of the “Translate” project is to develop a theoretical model for how ions move through nanochannels. The researchers are using computer simulations for this purpose. A special focus is being put on the processes that occur at the walls of the nanochannels. The researchers plan to gradually optimise the architecture of the channels and also the materials used to produce them. Furthermore, the system should not only be able to convert energy but also store it.

Any future applications will ultimately depend on, among other things, how expensive the materials and the resulting structures are. Possible materials include, for example, aluminum or silicon. At the University of Maryland in the USA, they are carrying out research into a cellulose-based material that is much easier to procure and thus has a better environmental footprint. A realistic application could be, for example, converting the exhaust gas heat from HGVs into electricity to power the onboard computer or the vehicle lights. This would reduce the consumption of fuel.

However, also IT companies are aware of the potential offered by this type of research. For example, Facebook operates a large computer centre covering an area of 50,000 square metres in Odense. Air conditioning systems are used to cool the servers and maintain the temperature at below 30 degrees Celsius in these types of computer centres. The hot air is often released directly into the atmosphere. The company recently joined forces with the local supplier of district heating Fjernvarme Fyn to transfer the heat generated by the servers to radiators in the nearby community. If it also becomes possible to generate electricity from these types of computer centres in the future, this will make an important contribution to the sustainable generation of energy.