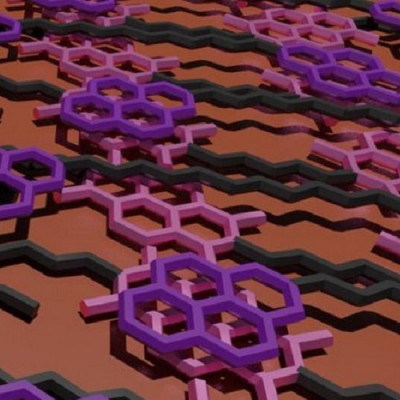 Colorful organic materials have fascinated scientists already for more than 200 years. The color of an organic material typically arises from light-matter-interactions that involve electronic transitions such as charge transfer (CT) within or between organic molecules. Modern research has shown that besides being colorants, organic CT materials can be used for many more applications such as photovoltaics or illuminating devices. To aid this development and to study the formation and the applications of prospective supramolecular charge transfer systems, Andreas Rösch explored several approaches for developing prospective model systems.

Humankind has been using paints for already more than 40000 years to convey messages and to preserve cultural heritage. Whereas the dyes that were used initially were natural products, technological advances provided access to synthetic colorants such as the azo dyes which revolutionized the use of colors in everyday life.

Whereas research on intermolecular charge transfer (CT) systems has produced a plethora of functional dyes for various (opto-) electronic applications, the formation of CT complexes between individual molecules has been used for the preparation of many supramolecular systems in the solution or the bulk phase.

Today, the color of a dye molecule can be characterized by analytic techniques such as ultraviolet-visible (UV/Vis) spectroscopy. In combination with the determination of the chemical structure and quantum chemical theory, structure-property relationships of organic colorants have been investigated quantitatively.

An important light-matter interaction that has often been used to create colors visible by eye is the absorption of light in the visible regime. This property is often found in materials that exhibit charge transfer between electron-rich donor (D) and electron-poor acceptor (A) moieties.

Depending on the chemical structure of the involved compounds, CT can occur either intramolecularly (ICT), i.e. within a single molecule, or intermolecularly, i.e. between two individual molecules. Prominent examples for compounds that exhibit ICT are push-pull dyes. Owing to their synthetic accessibility, tunable photophysical properties and their high extinction coefficients, a variety of such organic dyes has already been in commercial use for more than a century.

Today, a plethora of functional dyes is available to realize a variety of (opto-)electronic applications such as sensors, illuminating and photovoltaic devices. In contrast to ICT, intermolecular CT occurs when a close adduct of D and A moieties of two different molecules is formed.

This adduct is then called CT complex. One particularly famous example for a CT complex is formed when mixing iodine to an aqueous solution of starch and noticed by the development of an intense blue color. Although this color formation has already been reported for the first time more than 200 years ago, the structural entanglement of the respective CT complex was unraveled only much later.

Once the structural requirements for forming CT complexes were understood better, CT complexes could be used to design supramolecular systems, i.e. to form functional structures with sizes beyond a single molecule.

In the presented thesis, Andreas Rösch aims to further enlarge the scope of preparing and applying organic charge transfer systems in the area of supramolecular chemistry. In the first part of this thesis, he prepared novel organic dyes in which electron-rich and electron-poor moieties are connected covalently. He shows that a mixture of the compounds forms a semiconducting material which does not only transmit electrons but also biases the electron spin.

Since the generation of such spin-polarized current is of potential interest for application in asymmetric catalysis, he implemented the gained structure-property relationships in the design of metal-free material known for application in electrocatalysis.

In the second part of the thesis, he decorated surfaces with highly ordered arrays of electron-rich and electron-poor motifs. One of the generated architectures contains stacks of electron-rich and electron-poor molecules, in which the close proximity of D and A moieties suggests the successful formation of CT complexes on surface. He showed for the first time that such an architecture can be formed in a stepwise, non-covalent approach. This finding has important implications for designing future's electronic devices with dimensions on the nanoscale.