Muscling Up with Nanoparticle-based Anti-inflammatory Therapy 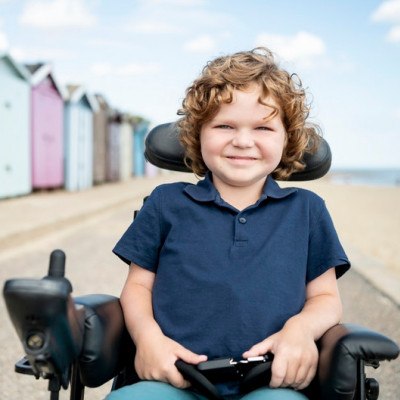 Muscular dystrophies are a group of genetic diseases that lead to the progressive loss of muscle mass and function in patients, with the incurable Duchenne Muscular Dystrophy (DMD), which affects all the body’s muscles primarily in boys, being particularly severe. DMD can be caused by more than 7,000 unique mutations in the largest gene of the human genome, which encodes a central protein in muscle fibers. While this astounding number of mutations all variably block muscle function, the affected muscles share another common feature – chronic inflammation.

As chronic inflammation significantly contributes to the speed and severity of muscle degeneration, researchers are pursuing different anti-inflammatory approaches that could be applied to the weakening muscles of DMD patients. Thus far, it has become clear that broad, systemically applied anti-inflammatory therapies cannot reach sufficient efficacies in individual muscles and that, in addition, they can be toxic to patients and increase their risk of infections. To overcome these barriers, locally acting therapies that could be applied on-site at affected muscles would have significant advantages.

Now, a research team at Harvard’s Wyss Institute for Biologically Inspired Engineering and John A. Paulson School of Engineering and Applied Sciences (SEAS) led by Wyss Institute Founding Core Faculty member David Mooney, Ph.D., has developed a new approach in which specifically designed anti-inflammatory nanoparticles (NPs)that could be applied locally and selectively to chronically inflamed muscles severely affected or at more immediate risk of deterioration, and maybe difficult to reach with oral therapeutics. In an advanced mouse model of DMD, this strategy increased the volume of muscles covered by myofibers and improved muscle functions by boosting the numbers of infiltrating anti-inflammatory regulatory T cells (Tregs). The findings are published in Science Advances.

A biomaterial-based solution: design and validation

“Using NP-based cytokine delivery, we can create a therapeutic immune status in muscles affected by DMD that targets inflammation as a universal driver of the disease,” said Mooney, who leads the Wyss Institute’s Immuno-Materials Platform and is also the Robert P. Pinkas Family Professor of Bioengineering at SEAS. “Given the localized delivery of the highly effective cytokine interleukin-4 (IL-4), this approach could be developed as a stand-alone therapy, or in the future be used in combination with genetic approaches designed to repair specific DMD mutations in patients.”

Given the localized delivery of the highly effective cytokine interleukin-4 (IL-4), this approach could be developed as a stand-alone therapy, or in the future be used in combination with genetic approaches designed to repair specific DMD mutations in patients.DAVID MOONEY

Pro-inflammatory and anti-inflammatory immune cells recruited to wasting muscles and further differentiating in them are thought to play an active game of tug-of-war. Both can temporarily get the upper hand with muscles going through continuous cycles of myofiber injury and regeneration while, in the longer-term, injury always wins. Importantly, the identities and activities of immune cells are controlled by pro- and anti-inflammatory cytokines, immune-modulating molecules that are released by immune or other cells in muscle tissue.

In 2018, Mooney’s team had shown that gold nanoparticles (NPs) presenting the anti-inflammatory cytokine interleukin-4 (IL-4) when locally injected into acutely injured muscles of mice, could improve the muscles’ strength by 40% compared to control NPs. The NPs were designed such that a core NP of gold was partially coated with a layer of the biocompatible polymer polyethylene glycol (PEG). To the parts of the NP surface revealed by gaps in the coating, IL-4 cytokine molecules were then bound (chemically conjugated), allowing them to be protected by the surrounding PEG, and to remain bioactive for extended times following their injection into muscle tissue and up-take by muscle immune cells.

To study the effects of NPs carrying IL-4 as well as NPs carrying IL-10 (a differently acting anti-inflammatory cytokine) on DMD-affected muscles, the researchers used an existing mouse model, known as Mdx, that carries a specific DMD mutation found in human patients. As muscle degeneration occurs much slower in Mdx mice than in human patients, they developed a microinjury approach in which hind limb muscles of aged Mdx mice were repeatedly injured to accelerate murine disease progression and more closely mimic human disease. In Mdx mice, the microinjury caused chronic DMD-like inflammation and damage that persisted for several weeks. 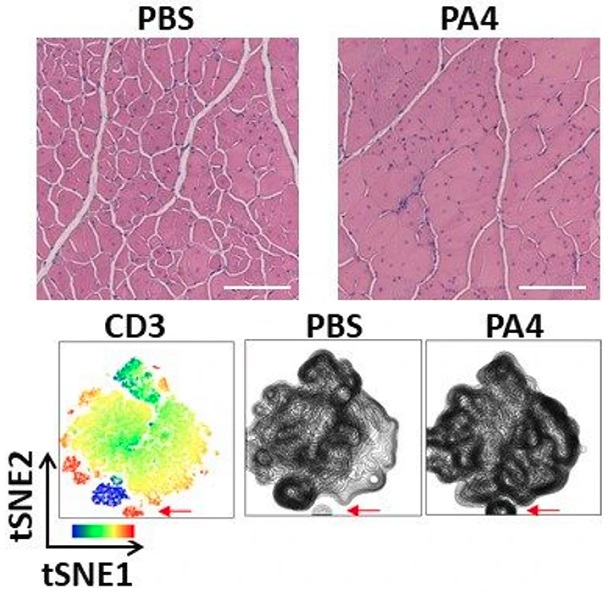 The images on top show representative muscle histology with increased muscle fiber area (pink) and improved morphology (fewer damaged fibers, white spaces) two weeks after mice with DMD were treated with a single dose of IL-4 NPs (PA4), compared to the PBS negative-control. Scale bar, 300um. The images on the bottom show a heatmap of a flow cytometry analysis (left) with the location of T cells positive for the CD3 marker indicated with a red arrow, and how the injection of IL-4 NPs (PA4) increased recruitment of the T cells to muscles. Credit: Wyss Institute at Harvard University

One week after terminating the microinjury procedure, they injected IL-4 NPs (and IL-10 NPs) directly into the chronically injured muscle and after another two weeks analyzed the effects. “Cytokine therapy with IL-4 but not IL-10 conjugated to NPs significantly increased the area in cross-sections covered by muscle fibers and, in living animals, the treated muscles showed a four-fold increase in contraction force and speed (velocity) compared to mice in control groups,” said first-author Theresa Raimondo, Ph.D., who performed the work as a graduate student in Mooney’s group and now is a Postdoctoral Fellow at MIT. “Interestingly, we could chalk up the regenerative effects to a specific increase in Tregs, an immunosuppressive T cell type that was known to counteract inflammatory processes in muscles weakened by DMD.”

DMD becomes most life threatening when the diaphragm and cardiac muscles become affected. The team hopes that their strategy one day could help improve breathing and heart function in patients, although future studies will have to assess this possibility.

The team observed a 50% increase in the number of Tregs in chronically injured muscles of aged Mdx mice while the numbers of other types of immune cells, including neutrophils, dendritic cells, natural killer cells, monocytes, and macrophages remained unchanged with their NP-based cytokine therapy.

Especially macrophages in their anti-inflammatory state called M2 had also been suggested to contribute the restoring muscle strength and function in mouse models of DMD, and were found previously by Mooney’s team to be key to repairing acutely injured muscles in normal mice. However, in the chronically inflamed muscles of the advanced Mdx model that were targeted with NP-based IL-4 therapy in the new study, M2 macrophages did not significantly contribute to the therapeutic effect. “Our combined findings highlight that the same cytokine therapy can achieve very different immunological outcomes with therapeutic effects on muscles dependent on the type of inflammation that is present,” said Mooney.

“This approach developed by Dave Mooney’s group at the Wyss’ Immuno-Material Platform could be developed as an alternative, strategically applied solution for treating patients with Duchenne Muscular Dystrophy whose loss of muscle mass and function cannot be effectively stopped by any other means. The same basic principle of NP-based cytokine therapy could also have potential for a variety of other muscle disorders where inflammation is a major force,” said Wyss Founding Director Donald Ingber, M.D., Ph.D., who is also the Judah Folkman Professor of Vascular Biology at Harvard Medical School and Boston Children’s Hospital, and Professor of Bioengineering at SEAS.

Read the original article on Wyss Institute at Harvard University.