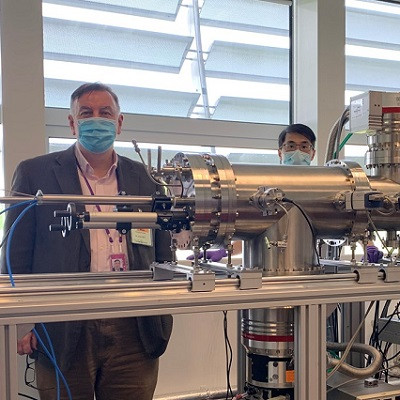 A new state-of-the-art instrument has been built by a team from Swansea University’s Nanomaterials Laboratory which will help scientists fight against climate change, microbial infection and other major global challenges.

The team invented and built the nanoparticle beam instrument with the help of scientists from Freiburg University, Germany and have now installed it at the UK’s national synchrotron science facility, Diamond Light Source, based at the Harwell Science and Innovation Campus in Oxfordshire.

In an initial four-year contract, the instrument will be available for use by staff and users of the Diamond synchrotron and a new Swansea University satellite laboratory team based at the Diamond facility, seconded from the University’s Nanomaterials Laboratory in  Engineering led by Professor Richard Palmer. The Laboratory is a world leader in inventing revolutionary nanoparticle beam technology.

The new Swansea instrument located at Diamond’s versatile soft X-ray (VerSoX) beamline B07 will enable the precise generation of nanoscale particles of diverse materials by the method of gas-phase condensation, their size-selection with a mass spectrometer and then deposition onto surfaces to make prototype devices. It will help scientists explore and optimise the influence of particle size, structure and composition on properties relevant to applications as varied as catalysis, batteries, and antibacterial coatings for medical implants. It has the potential to aid radical discovery and innovation in both energy and medical technologies. Initial focus will be on the generation of green hydrogen and green ammonia as clean fuels. This can positively contribute to tackling climate change by harnessing renewable but intermittent energy sources – such as wind, tidal and solar – and storing the energy in these molecules.

The nanoparticle source at Diamond will complement the Matrix Assembly Cluster Source (MACS) and two more new instruments developed by the group at Swansea University. The instrument at Diamond is an ultra-precision source of size-selected nanoparticles (also termed clusters) designed for materials discovery and optimisation, while the MACS is designed to scale-up discoveries made at this model scale to the level of manufacturing.

Professor Steve Wilks, Provost of Swansea University, said: “The installation of this new nanoparticle instrument heralds the start of a strategic partnership between Swansea University and Diamond Light Source, and is underpinned by the Welsh Government.  It opens up new opportunities for the Diamond staff and user community to work alongside our Swansea University satellite team based at Diamond, as conceived by Professor Palmer. In particular, nanoparticles have tremendous potential as new catalysts for sustainable energy generation, such as the splitting of water by sunlight to make clean hydrogen fuel, and for the synthesis of medicines and sensors.”

Professor Laurent Chapon, Diamond’s Physical Sciences Director, commented: “Diamond always wants to offer state -of-the-art instruments - often unique in the world - to the user community. One of the ways we push our technology is by partnering with key universities to help us drive forward the balance of scientific vision and needs from the community. Our collaboration with Swansea University provides a unique experimental (nanoparticle beam) set-up for materials discovery, that supports our surface, interface and catalysis community in addressing the pressing challenges of global health and climate. We all now look forward to the advancement in knowledge this new capability will bring.”

The Welsh Government Office for Science Sêr Cymru Programme is supporting the secondment of Dr Yubiao Niu from the Swansea team to Diamond via a Sêr Cymru Industrial Fellowship. He will commission the new instrument and explore the use of nanoparticle catalysts for low energy synthesis of ammonia and storage of hydrogen, with Imperial College also collaborating.

Professor Peter Halligan, WG’s Chief Science Advisor, said: “Generating a hydrogen-based fuel such as ammonia promises to overcome several of the technical challenges faced by hydrogen but has its own challenges. The metallic cluster catalyst method is innovative technology and one which deserves to be explored and exploited to its full potential. Dr Yubiao Niu, Swansea University, Diamond Light Source and Imperial College should be applauded for their foresight and ambition in this exciting area of research.”