Through the Nano Hole: LEGO Technique Reveals the Physics of DNA Transport through Nanopores 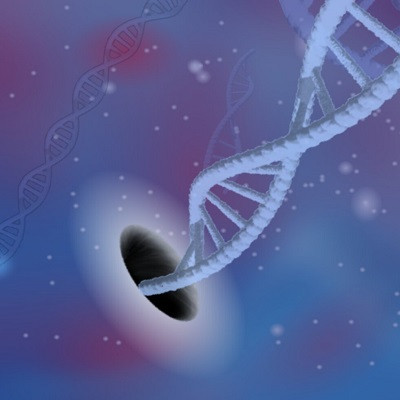 A new technique established by a team of researchers from the University of Cambridge and the University of Massachusetts reveals the fundamental physics of how a polymer such as DNA threads through holes 10,000 times smaller than the width of a human hair.

Polymers are long, chain-like molecules which are everywhere in biology. DNA and RNA are polymers formed by many consecutive copies of nucleotides coupled together. When being transported within or between cells, these biological polymers must pass through nanometre-sized holes called “nanopores”.

The study, published in the journal Nature Physics, shows how the Cavendish-led team developed a new LEGO-like technique for assembling DNA molecules that have protruding bumps at specific locations along their length.

By passing these DNA molecules through a nanopore and analysing simultaneous changes in the pattern of ion flow, the researchers determined with great precision how the speed of the DNA changes as it moves through.

The experimental results revealed a two-step process where the DNA speed initially slows down before accelerating close to the end of the translocation. Simulations also demonstrated this two-stage process and helped to reveal that the underlying physics of the process is determined by changing friction between the DNA and surrounding fluid.

“Our method for assembling LEGO-like molecular DNA rulers has given new insight into the process of threading polymers through incredibly small holes just a few nanometres in size,” explained Senior author Dr Nicholas Bell from Cambridge's Cavendish Laboratory. “The combination of both experiments and simulations have revealed a comprehensive picture of the underlying physics of this process and will aid the development of nanopore-based biosensors. It is very exciting that we can now measure and understand these molecular processes in such minute detail.”

“These results will help improve the accuracy of nanopore sensors in their various applications, for instance localising specific sequences on DNA with nanometer accuracy or detecting diseases early with target RNA detection,” said lead author Kaikai Chen, also from the Cavendish Laboratory. “The superior resolution in analysing molecules passing through nanopores will allow for low-error decoding of digital information stored on DNA. We are exploring and improving the utility of nanopore sensors for these applications.”